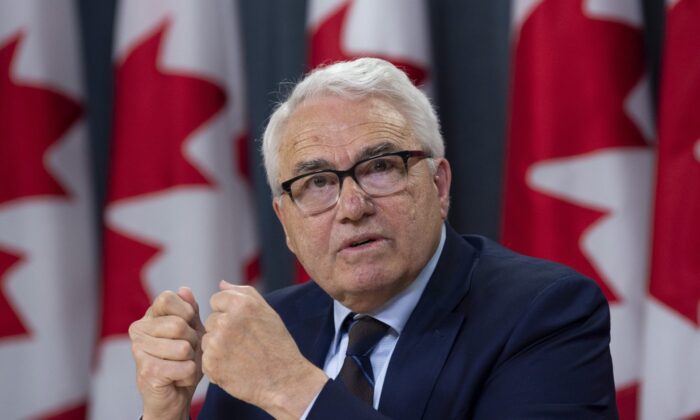 Official Languages Commissioner Raymond Theberge responds to a question during a news conference in Ottawa on May 9, 2019. (The Canadian Press/Adrian Wyld)
Canada

The official languages commissioner says events broadcast live on Prime Minister Justin Trudeau’s Facebook page must be accessible in both English and French.

More than a dozen people complained to the commissioner’s office about the lack of simultaneous translation on Trudeau’s Facebook page during a July 6 press conference announcing the nomination of Mary Simon as governor general.

In a preliminary report tabled last month and obtained by The Canadian Press, commissioner Raymond Théberge found that the Privy Council Office, which provided organizational support for the press conference, failed to meet its obligations under the Official Languages Act.

The investigation acknowledged that no simultaneous interpretation or subtitle service is currently available on Facebook Live, but Théberge suggested a link could be included in the caption of the video directing viewers to another website where the broadcast could be watched in both official languages.

The Privy Council Office did not immediately respond to a request for comment from The Canadian Press.

The nomination of Simon, an Inuk leader and former Canadian diplomat who does not speak French, led to hundreds of complaints to the language commissioner’s office.