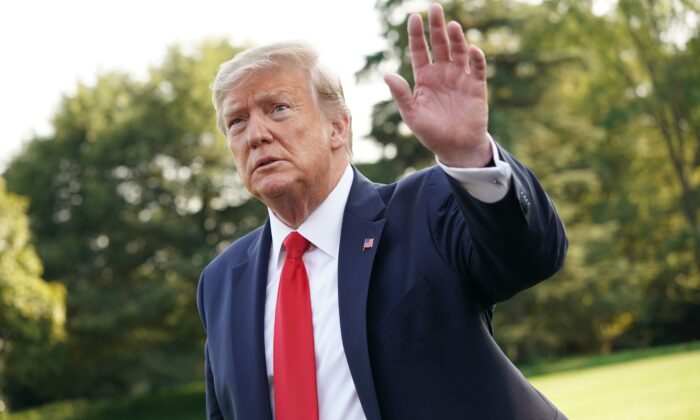 President Donald Trump gestures as he departs the White House in Washington on Sept. 16, 2019. (Mandel Ngan/AFP/Getty Images)
US News

Every Wednesday at 7 a.m., a small group of federal officials gather around a table somewhere in Washington to study the Bible and how it affects them in their personal lives and as public servants.

Their numbers can vary due to the intense demands of being members of President Donald Trump’s Cabinet, but on any given Wednesday, their ranks can include Secretary of State Mike Pompeo, Secretary of Energy Rick Perry, Secretary of Education Betsy DeVos, Secretary of Housing and Urban Development Ben Carson, and NASA Administrator Jim Bridenstein.

Leading their study is Ralph Drollinger, founder and president of the evangelical group Capitol Ministries (CapMin), who also leads similar weekly gatherings of senators and representatives. Drollinger’s CapMin groups are also found in 32 state capitals and 24 nations around the earth.

But it’s the Trump Cabinet study that has most raised eyebrows recently, so much so that The New York Times Magazine described it on Oct. 29 as “perhaps the most influential small-group Bible study in the world.”

Other than the prominence and power of the attendees, however, Drollinger’s Cabinet study is very much like the millions of similar evangelical Bible studies that meet every day of the week in every part of America.

These millions of evangelical Christians believe the Bible is the authoritative guide to daily living.

More than any other group of Americans, evangelicals define good and evil, morality and immorality, based on the Bible and their faith, according to Lifeway Research, the research arm of the Christian book publisher.

The centrality of the Bible in evangelical political thinking is reflected in a recent Lifeway survey that found 80 percent of evangelicals “say the Bible informs their political views,” while 81 percent “say they look for biblical principles to apply in evaluating political issues.”

When 1,000 Americans were asked about the biggest influences on their views on morality, the most often-cited factor at 39 percent was “parents,” Lifeway reported in 2017.

But Lifeway also found that “those with evangelical beliefs are most likely to point to their faith (64 percent), rather than their parents (22 percent).”

Evangelicals are also the most generous group of Americans, with eight of the top 10 most giving states (ranked according to their residents’ average percentage of net income devoted to charitable support) being in the South where Southern Baptist and independent conservative churches are especially common, according to the Philanthropy Roundtable.

And evangelicals believe in the power of prayer. The Barna Group reported in 2018 that “as of early 2017, 37 percent of American adults reported praying for Trump. Evangelicals were the group most active in their prayer, along with majorities of [other] groups with an active Christian faith.”

Barna also noted that “these prayers were just as common among black Americans as among white Americans, but less common among those who profess a non-Christian faith or fall into the category of notional Christians.”

Many evangelicals worry about the ultimate fate of the country if officials they support are defeated in upcoming elections.

“Almost three in five evangelicals by belief (58 percent) say that if those with whom they disagree politically are able to implement their agenda, “our democracy will be in danger,” Lifeway reported in its recent “Civility and Politics” survey.

Civility in public policy discussion remains important to most evangelicals, according to Lifeway, which found 66 percent “believe being civil in political conversations is productive, with 22 percent dissenting and 12 percent not sure.”

They worry, though, that their own civility is no longer returned by those who disagree with them.

“Powerful interests on the other side of today’s polarizing society now want to make Christian belief a mark of bigotry and hate,” Tom Gilson, senior editor of the evangelical website The Stream, wrote earlier in October.

Evangelicals make up, depending on how they are defined, anywhere from one third to nearly half of the American electorate. They provided the core of the Trump’s majority in 2016 and will almost certainly provide the core of his voters in 2020.

In a survey earlier this year, Lifeway found that “half of evangelicals by belief identify with the Republican Party and a majority of those that voted in 2016” supported Trump.

“Overall, 48 percent identify as a Republican, 31 percent as a Democrat and 21 percent as an independent or something else beyond the two major political parties,” Lifeway stated.

Trump remains more popular among evangelicals than with any other demographic group, especially whites in the South, according to the Pew Research Center.

Support for Trump among white evangelicals remains high at 69 percent approval, considerably higher than among white Catholics, mainline Protestants, and Jewish respondents, according to Pew.

But white evangelical support for Trump isn’t unconditional. Pew also found that “roughly half of white evangelicals do not think that Trump has set a high moral standard for the presidency since taking office.”

Drollinger agreed, telling The Epoch Times on Oct. 30 that he doesn’t “think it is fair to assume that evangelicals would stick with Trump no matter what. If he showed no regard for God’s moral law, then I think they’d turn from supporting him.”

Trump will be OK with most evangelicals as long as “in the outward sense he loves the Lord and loves his neighbor, and is in no serious, continual, present breach of the 10 Commandments,” Drollinger said.

A key to understanding the high level of evangelical support for Trump and for conservative Republicans more generally is their appreciation for the president as a “warrior,” according to Dr. Robert Jeffress, senior pastor of the 14,000-member First Baptist Dallas mega-church in Texas.

Jeffress was among a small group of key evangelical leaders who met on Oct. 29 with Trump in the Roosevelt Room of the White House. Others in the meeting included Faith and Freedom Coalition President Ralph Reed, Focus on the Family founder James Dobson, Family Research Council President Tony Perkins, and American Values President Gary Bauer. Former Rep. Michele Bachmann (R-Minn.) was also in the gathering.

“I think people did not elect him because of his piety. He doesn’t pretend to be overly pious, but they elected him because they view him as the warrior,” Jeffress told The Epoch Times on Oct. 30.

“He’s the one fighting for values that evangelicals hold very dearly and I think that’s one reason you have such pushback from evangelicals on impeachment.

“They take impeachment personally. They think to impeach President Trump equates with impeaching their own deeply held values. Christians have, I think for at least half a century, felt marginalized in society, and they see President Trump as representing values they think are important to the American people.”

Asked how evangelical support for Trump despite his alleged flaws compares with liberal support in 1998 for President Bill Clinton following his affair with White House intern Monica Lewinsky, Jeffress said “evangelicals stick with Trump because of his pro-life, pro-Israel and pro-religious liberty views and their opposition to Clinton wasn’t just due to his personal foibles, but because of the policies he embraced.”

Jeffress also said he believes there has been “an evolution in expectation” among evangelicals since Clinton was in the Oval Office.

“They’ve evolved in realizing there are no perfect presidents and that we can really only select a president on the basis of his policies, not on the basis of personal shortcomings he may have had in the past,” Jeffress said.

“They loved Ronald Reagan but the point they made was that, even in the Reagan administration and the Bush years, we’ve never had this kind of access to the White House as we’ve had under President Trump,” he said.

Asked if conservative leaders like Vice President Mike Pence, who has called himself an “evangelical Catholic,” will command the same level of evangelical support after Trump leaves office, Jeffress was upbeat.

“Vice President Pence is a friend of mine and he is an authentic Christian and a gifted leader. He is the natural heir to President Trump in 2024,” he said.