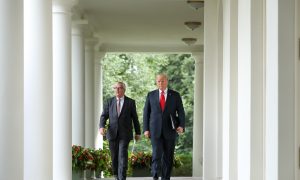 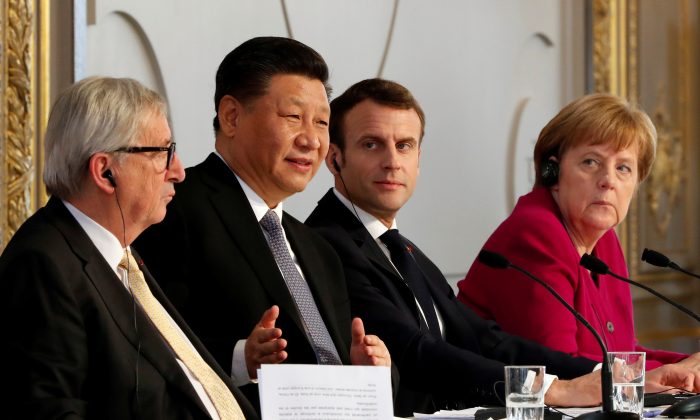 PARIS—Europe’s top leaders told Chinese leader Xi Jinping on March 26 they wanted a fairer trading relationship with China, signaling an openness to engage with Beijing’s “One Belt, One Road” infrastructure project if it meant more access to the Chinese market.

The Europe Union, the world’s largest trading zone, has become increasingly frustrated by what it sees as the slow pace of economic opening in China, even after years of granting China almost unfettered access to EU markets for trade and investment.

“We, as Europeans, want to play an active part [in the Belt and Road project],” Merkel said after the talks. “That must lead to a certain reciprocity, and we are still wrangling over that a bit.”

Juncker, who will host an EU-China summit in Brussels next month, reinforced EU calls for better trade reciprocity so that “European businesses could have the same degree of access to the Chinese market as Chinese businesses have in Europe.”

The “One Belt, One Road” (OBOR, also known as Belt and Road) initiative, championed by Xi, aims to link China by sea and land with Southeast and Central Asia, the Middle East, Europe and Africa, through an infrastructure network along the lines of the old Silk Road.

France says any Silk Road-style cooperation must work in both directions. Even as he presided over the signing of trade deals with China worth tens of billions of dollars this week, including an Airbus deal to sell 300 aircraft to China’s state buying agency, Macron pushed back against Beijing’s rights record and ambitions.

“The European Union is based on respect for individual freedoms and fundamental rights,” Macron, said on Monday, referring to Beijing’s alleged mistreatment of Muslim Uyghurs.

“That’s why France brings this issue up in its dialogue with China to express concerns that are ours and those of Europe on the question of respecting fundamental rights in China.”

The rapprochement between Rome and Beijing has alarmed Italy’s European allies, who consider it a strategic error to let Chinese companies acquire EU infrastructure such as ports.

In a sign the European Union wants to tighten conditions on access for Chinese businesses, it is about to introduce a system to screen foreign investments, particularly those affecting strategic infrastructure or technology. It has also urged leaders to back its plan to limit access to EU public tenders.

Sat beside Xi, Macron said competition and cooperation were natural but that Europe and China should strengthen multilateralism through deeper cooperation.

“We must … accelerate work underway between China and the European Union on modernizing the WTO to better respond to issues around transparency, overcapacity, state subsidies and dispute settlement,” Macron said on Tuesday.

“What’s at stake is demonstrating that cooperation yields more than confrontation.”

Seeking to reassure his European counterparts, Xi said both sides should “increase the positive energy.”