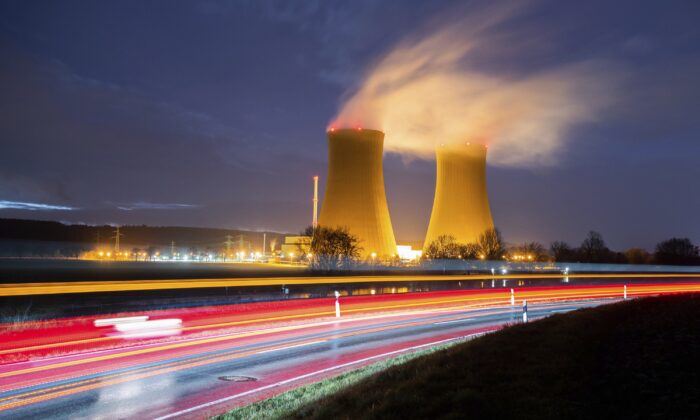 Steam rises from the cooling towers of the Grohnde nuclear power plant near Grohnde, Germany, on Dec. 29, 2021. (Julian Stratenschulte/dpa via AP)
Environment

The European Union has drafted a proposal that allows consideration for natural gas and nuclear energy to be included within the scope of “green” investments as countries and environmentalists battle over the complicated classification system.

Later this month, the European Commission is expected to suggest recommendations on the environmental criteria needed in order to classify an energy source as “green” and whether projects can be included within the EU’s “sustainable finance taxonomy.” According to draft conclusions viewed by multiple media outlets, the commission has suggested adding gas and nuclear energy to the green mix, resulting in immediate criticism from some governing political parties and environmental activists.

Gas projects would be temporarily labeled green if they were utilized in place of coal and emitted less than 270 grams of carbon dioxide equivalent per kilowatt-hour (e/kWh), receive a construction permit before the end of 2030, and plan to switch to a renewable energy source by 2035.

Similarly, nuclear energy would fall within the green category if new plants granted construction permits by 2045 meet specific criteria that present no significant harm to the surrounding environment, as well as water resources. Presently, countries in Europe are at varying stages of energy transition.

“Taking account of scientific advice and current technological progress as well as varying transition challenges across member states, the Commission considers there is a role for natural gas and nuclear as a means to facilitate the transition toward a predominantly renewable-based future,” the European Commission said in a Jan. 1 statement.

EU advisers have contended that gas projects shouldn’t be given green labels unless the amount of emitted carbon dioxide is less than 100 grams per e/kWh, failing which there could be disastrous consequences for the climate. Nuclear power, likewise, can have adverse effects on the environment, especially when it comes to the disposal of radioactive waste.

“By including them … the commission risks jeopardizing the credibility of the EU’s role as a leading marketplace for sustainable finance,” European Greens President Philippe Lamberts said, Reuters reported.

Several European countries that operate nuclear plants, such as France, want the bloc to consider the nuclear option to be included in the so-called taxonomy to make it eligible for green financing.

French Minister for European Affairs Clement Beaune said on Jan. 2 that the EU can’t become carbon-neutral without nuclear energy. Other countries, such as Germany, are against considering nuclear sources as a viable renewable energy option. The country is in the process of shutting down all of its nuclear plants.

Proponents of the EU plan claim that gas will make the transition from coal smoother and safer, while nuclear power produces zero carbon emissions. Opponents say that the plan weakens the current transition process toward net-zero emissions.

Habeck also accused the commission of greenwashing—making policies appear climate-friendly for the purpose of receiving investments and incentives when they’re actually not.

The EU has been a global trend-setter for fighting environment-damaging energy sources such as coal, and the new proposal will define how the bloc meets its future commitments. If a majority of member states support the proposal, it will become law and take effect in 2023.