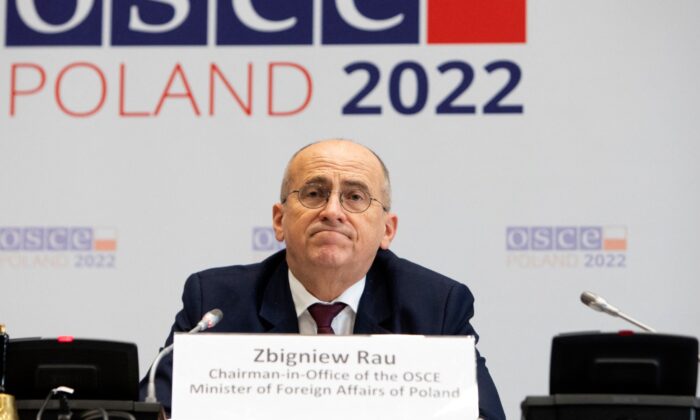 Zbigniew Rau, Polish Foreign Minister and Chairperson-in-Office of the Organization for Security and Cooperation in Europe (OSCE), gives a press conference at Hofburg Palace in Vienna, Austria, on Jan. 13, 2022. (Alex Halada/AFP via Getty Images)
Europe

The probability of a new war in Europe is now higher than at any time in the past three decades, according to a top Polish official who addressed delegates gathered in Vienna for a final round of diplomacy talks.

“It seems that the risk of war in the OSCE area is now greater than ever before in the last 30 years,” Zbigniew Rau said in the speech, without naming Russia.

The head of the Polish Ministry of Foreign Affairs made the comment while addressing envoys from the 57 members of the Organization for Security and Cooperation in Europe (OSCE)—listing a string of conflicts in which Moscow’s involvement has been alleged.

“For several weeks, we have been faced with the prospect of a major military escalation in Eastern Europe,” Rau said, likely referring to Russia’s deployment of more than 100,000 troops near its borders with Ukraine.

“We should focus on a peaceful resolution of the conflict in and around Ukraine,” he said, calling for “full respect of the sovereignty, territorial integrity, and unity of Ukraine within its internationally recognized borders.”

Russia seized the Crimean Peninsula from Ukraine in 2014—but has denied aggressive intent in the current crisis. The Kremlin insists the military deployment is a response to threatening behavior from the West after a growing presence of the North Atlantic Treaty Organization (NATO) in Eastern Europe.

Moscow has laid out several draft demands in December, saying it’s seeking no further NATO expansion, no missiles on Russia’s borders, and for NATO to no longer have military exercises, intelligence operations, or infrastructure outside of its 1997 borders.

Washington has said some of the guarantees proposed by Russia are “simply nonstarters for the United States,” but that it’s open for negotiations and resolving concerns through diplomacy.

The Jan. 13 talks were the third round of diplomacy this week, following Russia-U.S. talks in Geneva on Jan. 10 and a Russia-NATO conference in Brussels on Jan. 12 to discuss security proposals.

NATO Secretary-General Jens Stoltenberg received Russian Deputy Foreign Minister Alexander Grushko at alliance headquarters for the talks. Stoltenberg said “it is a positive sign” that the 30 NATO members and Russia sat around the same table and engaged in substantive topics, though it appears more dialogue is needed, as there are significant differences between NATO and Russia that “will not be easy to bridge.”

Russia on Jan. 13 gave a bleak assessment of its security talks with the United States and NATO this week, describing them as “unsuccessful.”

Kremlin spokesman Dmitry Peskov said Moscow views a sweeping sanctions bill unveiled by U.S. Senate Democrats as “extremely negatively” and that its timing appears to look like an attempt to put pressure on Moscow.

Peskov said that the first and second round of talks between Russia and the West had produced some “positive nuances,” but that Moscow was looking for concrete results, not nuances.