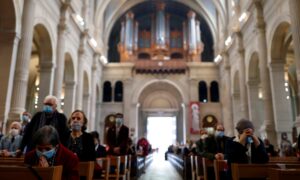 EU Leaders Will Try to Decide on President Over Dinner

Heads of state from across Europe will gather in Brussels on Nov. 19, to have a meal together and try to choose the first ever EU president and other top EU positions.

With the Lisbon treaty having been ratified by all EU member states earlier this month, time is now of the essence to make key appointments for the new EU positions before Dec. 1.

The function of EU president, formally called President of the European Council, is to promote unity across the 27 member states, and to represent EU views on the international stage for two and a half years.

Other top EU posts to be filled are High Representative for Foreign Affairs, and Secretary-General of the Council.

Until now candidate nominations have been kept under wraps. After weeks of behind-the-scenes talks, Sweden, which currently holds the half-year rotating presidency of the EU, will propose candidates.

“I think it’s the first time it will be possible for me to present candidates for the top jobs that will come into force with the Lisbon treaty,” said Swedish Prime Minister Frederik Reinfelt, referring to the working dinner in a web cast on an EU Web site.

In good European style most countries are likely to first push, or maybe just nudge their own agendas, but then do their best to reach a consensus on the candidature.

“It’s foreseen in the treaty that discussions on the names should be taken with a qualified majority. You always try to see if you can get a broader support then that,” said Reinfelt.

Speculation on candidates for the EU President role have been circulating for weeks. The staid Belgium Prime Minister Herman Rompuy is considered a frontrunner.

Rompuy has proven to be bridge builder after managing to keep the politically divided Belgium together as prime minister. It took the King of Belgium two requests before Rompuy agreed to take up the top post, a position he had never pursued. The previous four Belgium governments had fallen apart.

Britain is promoting Blair as candidate for the position, while Rompuy has received support from Germany and France.

In another indication of its uniquely European character, the Lisbon treaty does not clearly define what the scope of the top EU position will be. The first to be appointed President will probably set the tone.