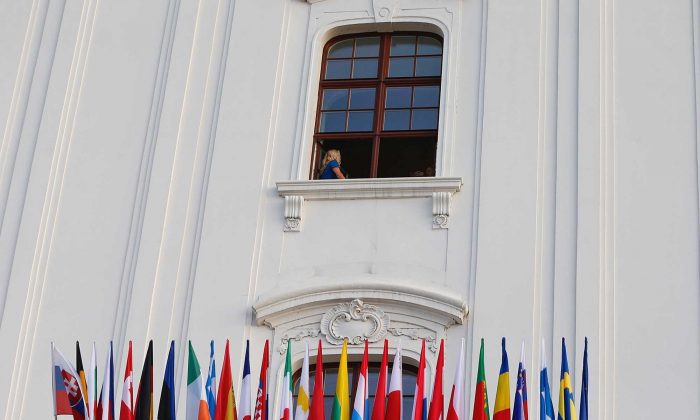 The flags of member states are placed on display before an EU summit at Bratislava Castle in Bratislava on Sept. 16, 2016. (AP Photo/Virginia Mayo)
International

BRUSSELS—The European Union’s 27 leaders will meet on April 29 to agree their negotiating lines for Brexit talks after London sends in a formal notification that it wants to leave the bloc, the chairman of the summit, Donald Tusk, said on Tuesday.

The meeting is a necessary step before the negotiations between Britain and the 27 remaining EU states can start formally. London said on Monday it would send in its exit notification on March 29.

“In view of what was announced in London yesterday, I’d like to inform you that I will call a European Council on Saturday, the 29th of April, to adopt the guidelines for the Brexit talks,” Tusk told reporters.

“You know I personally wish the UK hadn’t chosen to leave the EU, but the majority of British voters decided otherwise. Therefore we must do everything we can to make the process of divorce the least painful for the EU.”

Britain’s May to Launch EU Divorce Proceedings on March 29

The unprecedented talks are due to run for two years, though many diplomats and officials admit it would probably take longer.

“Our main priority for the negotiations must be to create as much certainty and clarity as possible for all citizens, companies and member states that will be negatively affected by Brexit, as well as our important partners and friends around the world,” Tusk added.

Europe Is Our Common Future, 27 Leaders to Say After Brexit
TOP NEWS