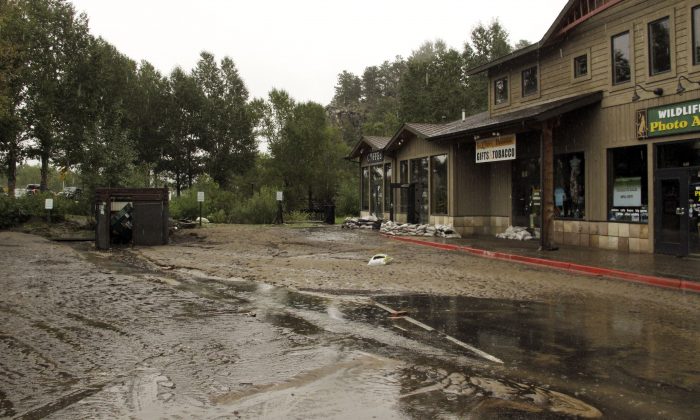 Mud from flooding is shown covering the main street Sunday Sept. 15, 2013 in Estes Park, Colo., after water and debris swamped the town when the Big Thompson River surged through Estes Park late Thursday and early Friday. In Estes Park, some 20 miles from Lyons, hundreds of homes and cabins were empty in the town that is a gateway to Rocky Mountain National Park. High water still covered several low-lying streets. Where the river had receded, it had left behind up to a foot of mud. (AP Photo/Jeri Clausing)
US

The flooding appears to be over in Estes Park, Colorado.

After days of rain or forecasts of possible rain, Tuesday is finally clear.

Residents and business owners are working on clearing the debris and muck from structures and roads to put the city back together.

Flooding started at Estes Park, a town at the entry point to Rocky Mountain National Park, on Friday.

Most of the 1,500 homes that were destroyed and the 4,500 that were damaged in the area were either in Estes Park or Lyons.

However, many businesses opened on Tuesday, including Caring Pregnancy Center, Crossfit of Estes Park, and Estes Park Brewery.

At the same time, the Estes Park Trail-Gazette reported on Monday that Estes Park could remain isolated for months.

The main roads into and out of town–State Highways 36 and 36–will remain closed indefinitely and residents are restricted to Trail Ridge Road through Rocky Mountain National Park and the narrow State Highway 7.

“We want to rebuild roads as fast as possible, make them better and for the best cost we can,” said Eric Brown, spokesman for Gov. John Hickenlooper. “It’s too early to know how the rebuilding will be prioritized. We want to restore full access to Estes Park and other communities impacted by the flooding as quickly as possible.”

People outside the town are being asked not to come into town at this point.

Estes Park School buildings opened weekdays starting Monday to care for and feed children. Students “are not required to attend but the schools want to be available as a resource. Buses will not run.”

Some properties along Fish Creek will continue to be without water until that can be restored.