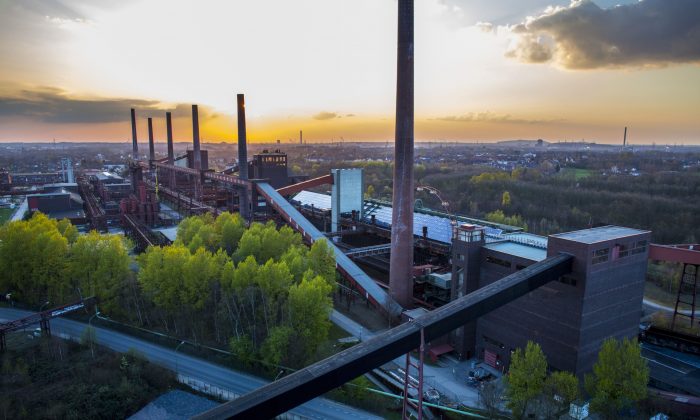 Part of the sprawling Zollverein Coal Mine Industrial Complex in Essen. The former mine is now a UNESCO World Heritage Site and one of the anchor points of the European Route of Industrial Heritage. (Jochen Tack/Stiftung Zollverein)
Arts & Culture

Essen and Bremen: From Coal to Decaf Coffee

When I checked the German-English dictionary for the word “essen,” the translation was “to eat.” But how is it that Essen, located in Germany’s Ruhr region, transitioned from being Europe’s biggest coal-mining city in the 20th century to one of the continent’s largest “cultural parks” while snagging a UNESCO World Heritage Site designation along the way?

It has nothing to do with food, as we found out on a recent visit to the immense Zollverein Coal Mine Industrial Complex, which is part of Germany’s Industrial Heritage Trail and chronicles 150 years of the rise and fall of the country’s coal-mining industry.

The entire complex measures 247 acres, the size of 100 football fields. There are museums, a performing arts centre, a university of the arts, and a conference centre, as well as bike rental stations to get you around if you don’t feel like walking. There’s also an excellent restaurant called Casino Zollverein, housed in a building that was formerly a low-pressure compressor facility.

Every building has been turned into something useful, whether it’s for art, culture, design, education, or recreation.

Our trip to Essen took an entire day and included a light lunch at a café onsite, followed later by a delicious gourmet dinner with great food and wine at Casino Zollverein. Also on the agenda was a visit to the harbour city of Bremen, where we learned about the history of immigration and coffee

The history of Germany’s coal industry is told through various exhibits in museums inside renovated buildings throughout the 65-building complex.

The sprawling coking plant (a term that describes how coal is broken down into solid mass in an oven before it can be used as a fuel or to make metal like steel) is emblematic of the Industrial Age and the “black gold” that made Germany so wealthy. Coal contributed tremendous power and political advantage to this region in the 19th and 20th centuries.

As we drove toward the complex, we saw a monstrosity that turned out to be a massive machine with chain pulleys that were used to pull huge containers of coal up from the mine. Once the coal was dumped into carts and hauled up to the top, the carts moved along a conveyer belt to other processing areas located in the various buildings.

By the way, this is perhaps the best part of the whole tour: you can actually sit in a converted coal cart and travel from one building to another on the conveyor belt. I wanted to do this again and again.

The main reception area is located in another cluster of buildings away from the coking plant. Inside its cavernous lobby there is a small café and gift shop, which is great for browsing and buying coal soap. There is also a miniature model of the entire complex that shows the huge scale of this place. Every building has been turned into something useful, whether it’s for art, culture, design, education, or recreation.

As far as the museums go, we found the exhibit “1914,” located in the coking plant, to be very intense and comprehensive. The huge sculptures of soldiers and wartime machinery make a very compelling exhibit.

Then there’s the Ruhr Museum located in the former coal washery, which extends one-third of a mile below ground and is the largest building in the complex. When the mine was operating, this was where sorting, classification, short-term storage, and distribution of hard coal was performed. The museum is a permanent exhibit of historical materials and information about the region.

The most modern exhibit, however, can be seen in the Red Dot Design Museum which has more than 2,000 items related to good design spread out over four levels, such as appliances, cars, robots, everyday items like computers, phones, utensils, cutlery, a gyrocopter, and even the USB stick.

Founded in 1955 by the Krupp family, the museum is a design-lover’s mecca. Each year, there’s a contest with an international jury of design experts that selects new items to be added to the museum’s archives. The lobby, designed by British architect Norman Foster using old bricks, rusty walls, and metal tubes, has a breathtaking atrium with a car chassis hanging from the ceiling.

The following day, we embarked on a short tour of Bremen, one of Germany’s important harbour cities which played a
significant role in immigration between Europe and the U.S. from 1830 to 1976.

Bremen’s oldest district, the Schnoor quarter, is a maze of tiny alleyways lined with narrow timber houses dating from the 15th and 16th centuries, set close together like pearls on a string (the German word for “cord” or “string” is “Schnur”).

This charming quarter offers visitors not only a glimpse of how people lived back then; there is also the city’s smallest hotel (one room), as well as the House of History where actors perform skits based on Bremen’s famous citizens and historical moments.

Bremen is also the city where de-caffeinated coffee was invented by one Ludwig Roselius, a local coffee merchant. He and his assistant Karl Wimmer are credited with developing the first commercial decaffeination process in 1903.

Also a patron of the arts, Roselius rebuilt the formerly dilapidated Böttcherstrasse, which remains today a half-mile stretch of arts and craft studios, shops, restaurants, museums, workshops and a remarkable carillon.

Built into a 1934 façade, the carillon is made up of 30 bells of Meissen porcelain. We arrived just in time to hear it chime (it chimes three times a day) and watch 10 wooden panels depicting 10 famous aviators and seafarers like Christopher Columbus and Count Zeppelin rotate in the bell tower.

We had a few hours left to visit the German Immigration Center in Bremerhaven, the harbour section of Bremen. Between 1830 and 1976, over 7.2 million people immigrated to the New World via Bremerhaven. Using real biographies and scenery, the museum tells the immigrants’ stories, their reasons for leaving, and their hopes and experiences for the next step in their lives. We also had time to see the short movies played at the Roxy Cinema, which features the charm of a 1950’s-style movie theatre.

The entire experience was a moving one, even as a foreign-speaking visitor. Incidentally, the museum won the European Museum of the Year in 2007.