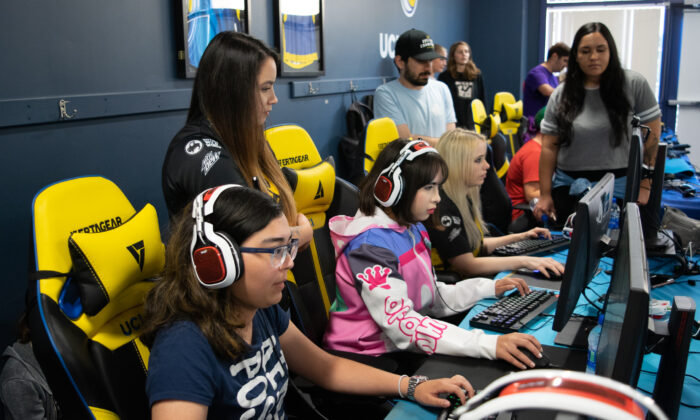 In an ongoing phenomenon that has been quietly rising in popularity as well as profits, competitive gaming in the form of esports is garnering the attention of top universities throughout the country.

The trend is due, in part, to resulting growth in information technology and audiovisual careers, as well as an explosion in esports audiences that rival those of traditional sports such as the NFL.

Esports is a world of organized competitive gaming. Competitors from different teams or leagues face off while playing online games such as Fortnight, Overwatch, or League of Nations. It is now considered another pathway to success for today’s “digitized youth.”

Karen Rager leads the Irvine, California-based Rager Resources Group, an executive search firm specializing in the placement of accounting, finance, and information technology professionals. She told The Epoch Times that the explosion in popularity of esports over the past few years is resulting in a myriad of business opportunities and high demand for professionals with the right mix of training, knowledge, and passion for the world of gaming.

“It’s one thing to want to be the Kobe Bryant of esports,” Rager said. “But there are so many other components around this exploding esports industry.

“There are jobs in programming, engineering, creative development, and design, but there’s also merchandising, marketing, branding, finance, event planning, legal, team and player management, shoutcasting [esports broadcasting], even journalism covering all of those areas of the industry,” Rager said.

Of all the opportunities centered around esports, she said she gets the most requests for cybersecurity experts.

“Protection from hackers is top of mind for universities and other companies operating in and around this space,” she said.

Rager said she recently noted 1,211 jobs posted on the Indeed job site under the category of esports. It’s only the tip of the iceberg, in her opinion, with the reopening of the economy beginning to occur and companies gearing up for a comeback as in-person business normalizes, and work-at-home opportunities continue to flourish.

Top of Its Game

In 2018, Goldman Sachs released an esports report estimating that the monthly global audience reach for esports would be upwards of 167 million people, larger than Major League Baseball and the National Hockey League.

The report stated that by 2022, “we estimate the eSports audience will reach 276 million, similar in size to the NFL.”

According to a pre-pandemic study released by Newzoo, it was estimated that the world’s 2.7 billion gamers would spend $159.3 billion on games in 2020. By 2023, the game market is predicted to surpass $200 billion.

As the esports industry continues to explode, there’s a demand for skilled, experienced esports management teams and supporting roles necessary to keep up with the momentum.

To meet that demand, a number of colleges and universities have developed esports programs, including some of the top-rated in the nation, such as the University of California–Irvine (UCI), Ohio State University, University of Texas.

The World of Gaming

At UCI, students can add the new esports-management specialized studies certificate, which is offered through the school of continuing education, onto their degree.

In 2016, UCI became the first public university in the U.S. to create an esports program as a minor to more traditional degrees like business management.

“Eports also has a huge opportunity to learn from the successes and shortcomings of traditional sports and provide a model for collegiate competition in the 21st century.”

UCI now has scholarship teams for League of Legends, Overwatch, and Super Smash Bros. Ultimate, with players able to regularly compete for championships with the help of coaches and support staff who ensure gamers are maintaining a healthy life-gaming balance.

“The competitive athletes in our program are absolutely wonderful, terrific young people, and it’s all very exciting,” Constance Steinkuehler, professor of informatics at UCI who has been studying the world of esports since 2017, told The Epoch Times.

“The thing I’m most proud of is UCI’s esports program. UCI was really out in front of the curve when it came to having esports as a competitive team on campus.”

While gaming is a large part of UCI’s esports program, students also learn how to speak knowledgeably about gaming history, the language of the gaming community, and business of esports with future employers and other industry stakeholders. They also develop actionable suggestions to encourage growth or improvement in industry careers.

The program is also geared to develop effective marketing communications that can engage fans and decision-makers within the esports industry through social media content development, fan interaction, and live event planning.

As an example of esports’ growing popularity, the Overwatch Championship tournament saw upwards of 304 teams, 2,500 players, and 227 unique schools across the U.S. and Canada all competing for their slice of a $48,000 scholarship and recognition as North America’s Overwatch champs.

Similar to traditional sports such as baseball, basketball, football, or hockey, esports is focused on teams of players. And like real-world sports, some go on to become celebrities in their field, established by massive social media followings and sponsorship deals.

The trend is such that traditional athletic apparel companies such as Nike and Adidas are anticipated to compete for virtual team jersey rights in the near future. Even major telecom organizations are moving toward acquiring gamer-centric programming providers, and innovations in video-streaming capabilities allow gaming platforms and titles to cash in on media rights.

Similar to professional athletes, esports superstars are increasingly in need of the type of career management that major sports stars have engaged for decades.