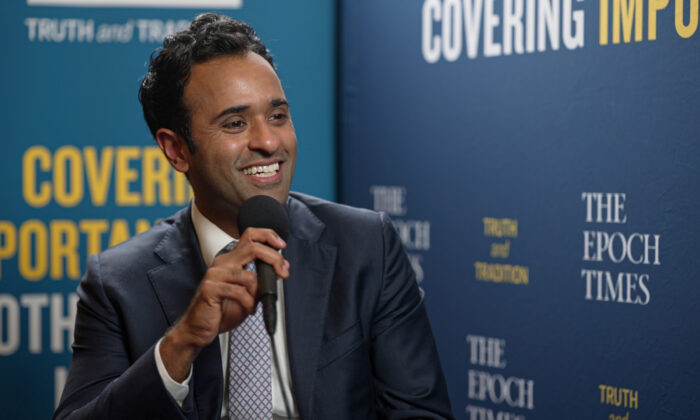 The push toward environmental, social, and governance (ESG) standards in the private sector is the “single greatest threat” to both democracy and capitalism in the United States, entrepreneur Vivek Ramaswamy said.

Agendas that the government cannot directly achieve via the Constitution are being pushed through the ESG movement in the private sector, he said. The ESG movement is gaining power through “the aggregation of capital” into the hands of a small number of investment firms, with the three biggest players being Vanguard, BlackRock, and State Street. Combined, these three firms manage over $22 trillion, Ramaswamy pointed out in an interview with  EpochTV’s “Crossroads” program.

Such actions by these investment firms have forced companies to adopt agendas that not only make these businesses “less successful” but also “suck the lifeblood” out of American democracy, he added.

Topics like climate change and systemic racism are questions that must be addressed through free speech and open debate in civic spheres rather than forcing them through America’s corporate boardrooms, Ramaswamy insisted.

The entrepreneur also highlighted the “ample ties” between the investment firms pushing ESG and the Biden administration. The Treasury Department, the Council of Economic Advisers, and the vice president’s office are all “chock full” of BlackRock alumni, he said adding that “this is a two-way street of crony capitalism.”

The industry most damaged in America from the ESG movement is energy, Ramaswamy said. Accumulating the capital of everyday American citizens, investment firms have told American oil companies to produce less energy, drill for less oil, and frack for less natural gas.

This has created a “generational energy crisis” in which the country is now suffering from energy shortages, higher gas prices, and less successful domestic energy companies.

Ramaswamy also criticized the double standards of the pro-ESG investment firms. These firms only impose ESG constraints on Western companies, but don’t “say a peep about them to Chinese companies.”

As a result, if Western companies like Chevron or Exxon were made to drop projects to conform to the emissions cap or climate goals, Chinese companies like PetroChina end up picking up these projects.

Despite Chinese companies being “far dirtier” than their American counterparts, BlackRock remains silent on China as they have numerous financial interests in the country. The Chinese Communist Party (CCP) will not grant BlackRock the license to do business in the country if they were to impose the same ESG standards on Chinese companies as they do on American ones, Ramaswamy said.

Hence, the idea that a free market exists is a “myth.”

Governments on both sides of the Pacific are using BlackRock to advance their interests, with the CCP and the “prevailing liberal government in the United States” pushing their own agendas.

BlackRock has therefore become a “political pawn” that is pretending to be an asset manager, he said.