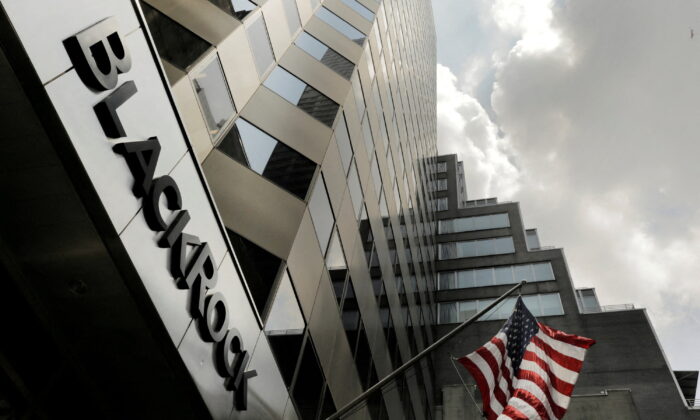 A sign for BlackRock Inc. hangs above the company's building in New York City, on July 16, 2018. (Lucas Jackson/Reuters)
Investment

ESG Is Simply a Socialist Plot by a Group of ‘Corporate Elites’ Disguised as Free Market: Andy Puzder

Many leftist progressive groups are pushing environmental, social, and governance (ESG) standards on companies and investments, claiming that such standards will benefit society. Andy Puzder, a visiting fellow at The Heritage Foundation and author of “The Capitalist Comeback,” warns that ESG is simply socialist ideologies being falsely presented as the free market.

In an interview with The Epoch Times’ “Crossroads” program, Puzder pointed out that while capitalism is a form of “economic democracy,” with customers in charge of the economy, socialism involves the elites controlling the economy. In capitalism, people vote with their dollars while companies become profitable by meeting the needs of the people.

ESG is a form of investing in which the focus is on “accomplishing leftist political agenda” as opposed to enhancing investor returns.

A group of “corporate elites” at financial firms such as BlackRock, State Street, and Vanguard—which together control more than $20 trillion worth of investments—are “imposing their will” on the managers of companies that they are invested in.

Corporate elites pushing ESG investments aren’t, as such, part of the government. But now under the Biden administration, “the government elites are working with them,” Puzder said. As radical leftist ideologies aren’t overtly popular, such ideas are being pushed onto companies via ESG investing, he stated.

“It’s a threat to our economic freedom because they use this tremendous voting power to compel the management of these companies not only to pursue these leftist goals but also to put those leftist goals above their obligation, their traditional obligation to generate returns for shareholders,” he warned.

“And it’s a threat to our individual liberty because they figured out how to use our money to do it.” These investment companies use money that the public has invested in 401(k)s and pension funds to push forward their agenda.

Radical leftist ideas, such as critical race theory, are being indoctrinated into employees, teaching them that they are either oppressors or oppressed based on skin color.

This is basically training workers to “hate each other.” ESG also prioritizes hiring people based on their sex or race rather than individual qualifications, Puzder stated.

When a small hedge fund wanted to put environmentalists on the board of directors of oil giant ExxonMobil, Vanguard and BlackRock voted along with the hedge fund. The founder of the fund was from BlackRock, Puzder said. As a result of the vote, there are now environmentalists sitting on Exxon’s board, having a say in the future of the oil firm.

“Nobody can rationally think that that’s going to improve the profitability of an oil company, the time when oil [prices are] shooting through the roof. I mean, it doesn’t make any sense. So that’s not marketing. That’s oppression, that’s socialist, that’s elites deciding what we should and shouldn’t do,” he said.

Large financial firms are legally obliged to fulfill their fiduciary duty, which is that these companies must invest people’s money in the best interests of their investors. State attorneys general from 19 states recently issued a letter that stated that BlackRock’s ESG agenda violates the fiduciary rules of their respective states.

But BlackRock has “more money than God,” Puzder said. This allows the company to hire the best lawyers in the world. In response to the attorneys’ letter, BlackRock justified how it complies with fiduciary rules thanks to its cohort of such lawyers, he said.

Last month, for example, DeSantis and the trustees of the State Board of Administration passed a resolution that instructed the state’s fund managers to desist from making investments based on ESG ideologies.