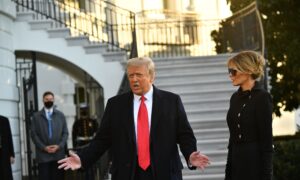 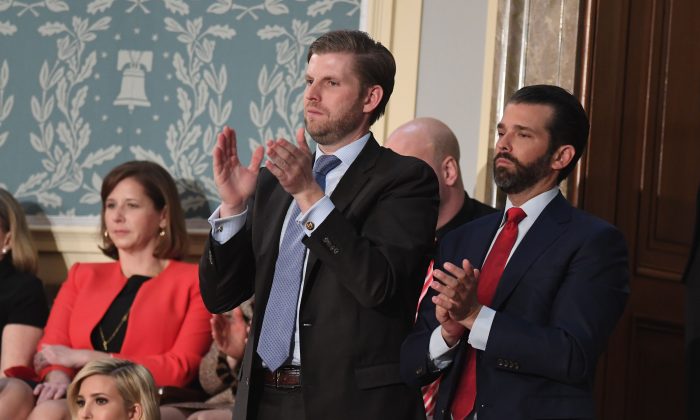 Eric Trump (L) and Donald Trump, Jr., applaud as their father President Donald Trump delivers the State of the Union address before a Joint Session of Congress in Washington on Feb. 5, 2019. (Saul Loeb/AFP/Getty Images)
US News

Eric Trump: ‘The Best Is Yet to Come’

“Without a doubt, the best is yet to come,” said Eric Trump in a statement before President Joe Biden was sworn into office at around noon on Wednesday.

“My hope for Americans is that we never tolerate the old norm” and “take what we have learned in the past four years and we continue to fight for the liberties and pride that allows us to be red, white, and blue,” he remarked.

Elaborating further, Eric Trump said that his family—because of the constant pressure campaign against Trump—”carried tremendous weight through unprecedented resistance and persecution.”

He added, “No president has sacrificed more. But he (and we) did it for the good and betterment of the nation.”

Ivanka Trump, an adviser to the president, posted a message on Twitter and Instagram, saying, “The last four years have been an incredible journey.”

“Thank you for all of the love and support you have shown me. I leave D.C. in awe of the compassion, grace and grit that exists across the nation,” she said on social media. “I hope and believe that America can move forward in a positive way, acknowledging our differences and find common ground—that is how we will remain the greatest nation.”

Donald Trump Jr. shared a brief message: “Thanks dad! America owes you a debt of gratitude.” He included an image of the former president holding an American flag that has been turned into countless memes.

Tiffany Trump, Trump’s child with his second wife, Marla Maples, who has remained mostly out of the limelight, wrote on Twitter: “It has been an honor to celebrate many milestones, historic occasions and create memories with my family here at the White House, none more special than my engagement to my amazing fiancé @MichaelZBoulos! Feeling blessed and excited for the next chapter!”

On Wednesday morning, Trump touted his administration’s record for creating jobs, being tough on the Chinese regime, the stock market, and more. And after leaving Washington, Trump headed to his Mar-a-Lago resort in Palm Beach, Florida.

There has been speculation that Trump’s family could start a media company or new political party to connect with his supporters.

“There has never been a political figure with more support or energy behind them than my father,” Eric Trump said in a statement to the New York Times about the family’s future. “There will be no shortage of incredible opportunities in real estate and beyond.”