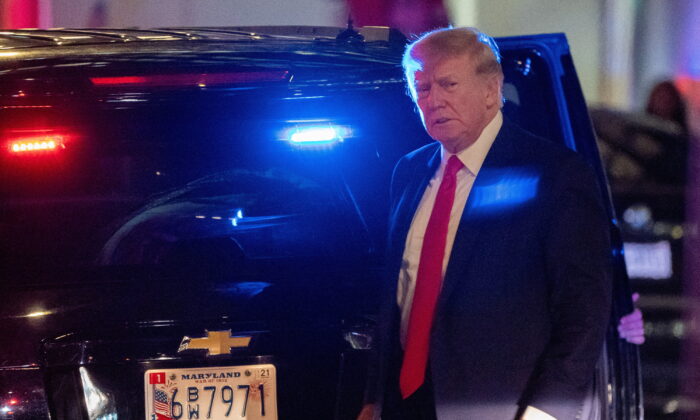 “Will you—you still have the surveillance tape, is that correct? Will you—are you allowed to share that with the country?” Fox News host Sean Hannity asked Eric Trump on Monday night.

The younger Trump replied, “Absolutely, Sean,” adding that the video will be released “at the right time.” He said that law enforcement officers, including FBI agents, should wear body cameras for total transparency.

“That’s why cops wear body cams. They don’t tell you to turn off cameras—they want transparency, and that’s not what happened here,” Trump said, referring to the raid.

The former president’s second son did not say when the video footage will be released.

In an interview with the Daily Mail last week, Eric Trump said that lawyers were told by FBI agents to turn off security cameras in Mar-a-Lago. But they didn’t, and a lawyer for Donald Trump, Alina Habba, later revealed that the former president and family watched the FBI raid via CCTV cameras last week.

Another lawyer, Christina Bobb, told Real America’s Voice last week that surveillance cameras were turned off for a short period of time while the FBI agents spoke with the former president’s lawyers. However, she said the family saw “the whole thing,” referring to the raid, while they were in New York.

Meanwhile, Bobb recalled to the outlet that she was “stuck in the parking lot” of Mar-a-Lago and was “there to collect paper and answer questions.”

“The FBI and others from the Federal Government would not let anyone, including my lawyers, be anywhere near the areas that were rummaged and otherwise looked at during the raid on Mar-a-Lago,” former President Trump wrote on Truth Social last week.

Following the raid, the Department of Justice and FBI have remained relatively tight-lipped about why the agents searched Mar-a-Lago or what they were investigating. Three days after the raid, Attorney General Merrick Garland told a news conference that he personally signed off on the FBI’s attempt to obtain a warrant, which was approved by U.S. Magistrate Judge Bruce Reinhart.

Republicans and Trump have called on the agencies to unseal an affidavit in the case. The move would show why the FBI launched the raid.

The warrant and property receipt were unsealed a day after Garland’s news conference, showing that FBI agents recovered several boxes of allegedly classified or top-secret documents and other material. It’s not clear what the documents entailed.

The unsealed warrant showed that Trump is being investigated for possible violations under the Espionage Act as well as obstruction of justice. However, the document did not provide any more details.

Since then, the Department of Justice has filed a motion urging the court to keep the affidavit sealed. Lawyers for the federal agency argued that unsealing it would, without elaborating, “irreparably harm the government’s ongoing criminal investigation.”

But on Monday, Trump wrote on Truth Social that several of his passports were taken by the FBI and demanded their return. An unnamed Department of Justice official told mainstream news outlets that the passports would be returned following Trump’s statement.

It came as Trump spokesman Taylor Budowich posted a screenshot of an email to Twitter allegedly from a Department of Justice official that admitted the bureau took the passports.

“We have learned that the filter agents seized three passports belonging to President Trump, two expired and one being his active diplomatic passport,” the email said, adding that the agency is “returning” the passports.

Editor’s note: A correction was issued to clarify Eric Trump’s remarks to Fox News about releasing the surveillance footage.