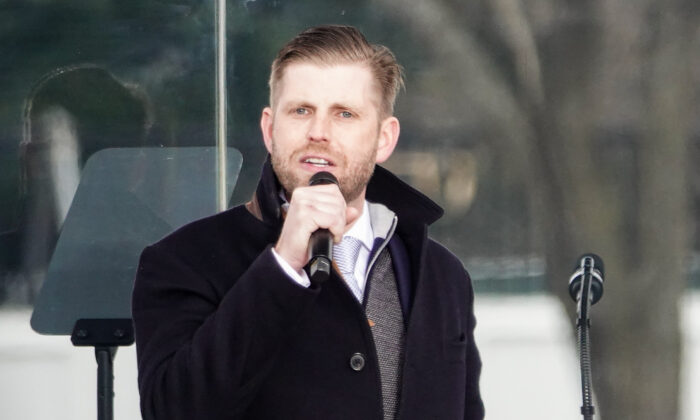 “De Blasio is now shutting down skating season while New York dies. It’s horribly sad,” the executive vice president of the Trump Organization and son of former President Donald Trump told NY Post. “The mayor is absolutely petty. This isn’t about us, this is about the people of the city who come here to skate and disabled kids who joined hockey teams and others who joined skating school and take lessons every week.”

He made the remarks as the Trump Organization terminates operations at two rinks in Central Park—Wollman Rink and Lasker Rink—because New York City decided in early January to end its contract with Trump’s business.

The Trump Organization and the New York City Mayor’s Office did not respond to requests for comments from The Epoch Times.

Four of the Trump Organization’s operations were targeted by the city’s abrupt termination: the Central Park Carousel, Wollman and Lasker skating rinks, and the Ferry Point Golf Course.

The contract for the rinks were set to expire in April but Blasio decided to terminate early on Feb. 26.

As a result, the Trump Organization had to cease operations on Sunday to give them time to pack up and move out, the NY Post reported.

Donald Trump, a famous real estate mogul with businesses all over the United States and other countries before he was elected as the president in 2016, rebuilt the Wollman Rink and brought it back to life in 1996.

A public document (pdf) from the New York City government shows that the city is still looking for an operator for the rinks after abruptly suspending the contract with the Trump Organization.

The president’s son said in early January that businesses cutting ties with their organization are engaging in “cancel culture” to cancel anyone they don’t agree with.

“We live in the age of cancel culture but this isn’t something that started this week. It is something that they have been doing to us and others for years,” Eric told The Associated Press on Tuesday. “If you disagree with them, if they don’t like you, they try and cancel you.”

Eric, along with his brother Donald Trump Jr., have been heading up the family business since Trump senior was elected president.

After the Jan. 6 breach of the U.S. Capitol, the left has been blaming Trump for inciting violence, which he vehemently denies. The House Democrats and a few Republicans went further to impeach the former president in a process that most Senate Republicans regarded as unconstitutional.

The Senate acquitted the former president with a 57-43 vote. Sixty-seven votes were needed for an impeachment conviction.

Meanwhile, businesses have been severing their ties with Trump and his organizations. Those companies include banks that say they will not lend to him, the PGA (Professional Golf Association) canceling its tournaments at his golf courses, and most recently, the New York City mayor saying the city is cutting ties.