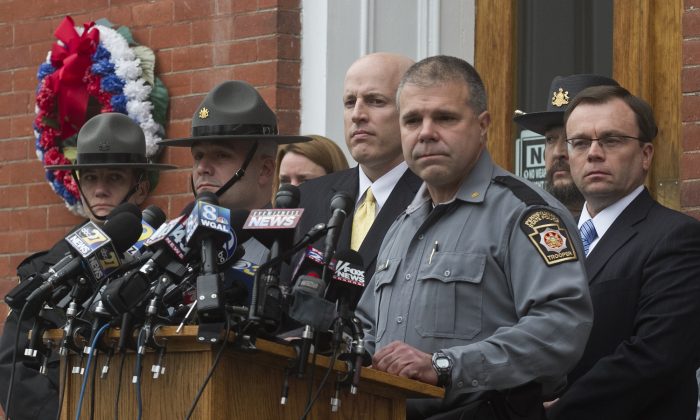 Eric Frein Caught After 48-Day Manhunt: ‘We Just Had a Hunch’

MOUNTAINHOME, Pa.—Scott Malkowski, a task force commander with the U.S. Marshals Service, spied a figure moving from the woods toward an abandoned airplane hangar in the Pocono Mountains. Looking at his face, his black hat and fleece, and his height and weight, Malkowski was certain he had his man.

“Suspect,” he told the two operators by his side, and they fanned out on either side of their quarry, who had no idea he’d just been spotted. Hidden by tall grass, Malkowski moved stealthily toward his target, adrenaline coursing through his body.

The marshals service was one of several state and federal law enforcement agencies that took part in the intensive manhunt for Frein — the survivalist and marksman charged in a deadly sniper attack outside the Blooming Grove state police barracks — and wound up nabbing him on the 48th day of the search.

Frein had an initial court appearance Friday morning and remained jailed without bail on first-degree murder and other charges in the Sept. 12 ambush that killed Cpl. Bryon Dickson and critically wounded Trooper Alex Douglass.

He did not have a lawyer and was not asked to enter a plea. A preliminary hearing was set for Nov. 12.

The district attorney plans to seek the death penalty.

Until his capture around 6 p.m. Thursday, Frein had some residents beginning to wonder if law enforcement was up to the task, given the rugged terrain of the Poconos and the evident skill with which he eluded dogs, thermal-imaging cameras and teams of heavily armed officers.

Scott Kimball, though, never had a doubt.

“We expected to find him,” said Kimball, 48, a Virginia-based member of the U.S. Marshals’ special operations group.

On Thursday, Kimball was stationed in a command post while Malkowski, 44, and other members of the team — acting on a request from Pennsylvania State Police — worked to clear an abandoned resort. About two hours in, Malkowski and two others approached the hangar at the old Birchwood-Pocono Airpark.

“We just had a hunch that if we were on the run, this is a place we would hide,” he said.

Once Frein was spotted, Malkowski and his team sneaked up on the fugitive. They were about 25 yards away when Frein finally realized he wasn’t alone. Malkowski identified himself as law enforcement and ordered Frein, who was unarmed but had weapons in the hangar, to get on the ground.

He made no attempt to flee and didn’t put up a fight.

“He had nowhere to go. There is nothing he could’ve done,” Malkowski said, adding: “From what I saw, he felt defeated because we’d won. We’d defeated him.”

After the marshals turned him over to state police, Frein was placed in Dickson’s handcuffs and driven in Dickson’s squad car to the Blooming Grove barracks.

Frein, 31, could be seen with a gash on the bridge of his nose and a scrape over his left eye. Malkowski and Kimball said he suffered the injuries while marshals had him down on the pavement.

Malkowski said his first thoughts upon Frein’s capture were “relief for the community, for Pennsylvania State Police, and closure for Cpl. Dickson’s family that he’s finally in custody.”

Authorities said they were trying to reconstruct Frein’s time on the run. They believe he broke into cabins and other places for food and shelter, and he evidently found time to shave — he had a neatly trimmed goatee when he was caught.

State police Lt. Col George Bivens put the cost of the manhunt at about $10 million.

Troopers questioned Frein, but authorities would not disclose what he told them or discuss a possible motive. Authorities have said Frein had expressed anti-law enforcement views online and to people who knew him.

With the manhunt over, tactical experts like Malkowski and Kimball were getting ready to leave the northeastern Pennsylvania woods behind.

Kimball’s next mission? “Go home to see my kids.”