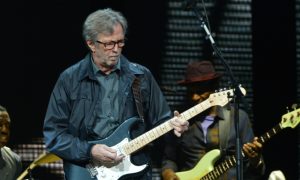 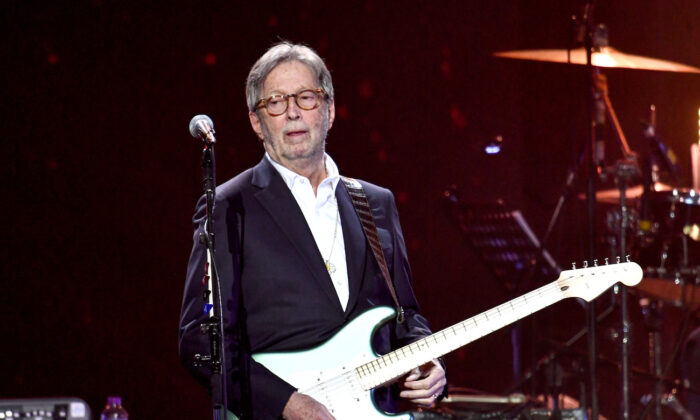 Eric Clapton performs on stage during Music For The Marsden 2020 at The O2 Arena in London, England, on March 3, 2020. (Gareth Cattermole/Getty Images)
UK

Eric Clapton said on Wednesday that he will refuse to perform at venues where proof of vaccination against COVID-19 is required, after British Prime Minister Boris Johnson announced the introduction of vaccine passports from September for certain events and venues.

“Following the PM’s announcement on Monday the 19th of July 2021, I feel honour bound to make an announcement of my own: I wish to say that I will not perform on any stage where there is a discriminated audience present. Unless there is provision made for all people to attend, I reserve the right to cancel the show,” the musician said in a statement shared on architect and film producer Robin Monotti Graziadei’s Telegram account.

Johnson on Monday announced that English nightclubs and venues with large crowds will require evidence of full COVID-19 vaccination upon entry from the end of September. His announcement came on England’s “freedom day,” which saw the lifting of most COVID-19 restrictions.

“If we don’t do it now we’ve got to ask ourselves, when will we ever do it?” Johnson said of ending over a year of lockdown restrictions in the country. “This is the right moment but we’ve got to do it cautiously. We’ve got to remember that this virus is sadly still out there.”

“I would remind everybody that some of life’s most important pleasures and opportunities are likely to be increasingly dependent on vaccination,” Johnson said.

“There are already countries that require you to be double jabbed as a condition of quarantine-free travel, and that list seems likely to grow. And we are also concerned—as they are in other countries—by the continuing risk posed by nightclubs.

His decision to roll out vaccine passes from the UK’s National Health Service for certain venues came after authorities in countries such as Israel and the Netherlands were forced to close nightclubs following large CCP (Chinese Communist Party) virus clusters linked to their reopening.

Clapton previously said he had a “disastrous” experience with the AstraZeneca vaccine, and blamed “propaganda” for pushing the two-dose experimental vaccine on him.

“I took the first jab of AZ [AstraZeneca] and straight away had severe reactions which lasted ten days, I recovered eventually and was told it would be twelve weeks before the second one,” Clapton wrote in a statement in May.

“About six weeks later I was offered and took the second AZ shot, but with a little more knowledge of the dangers. Needless to say the reactions were disastrous, my hands and feet were either frozen, numb, or burning, and pretty much useless for two weeks, I feared I would never play again, (I suffer with peripheral neuropathy and should never have gone near the needle). But the propaganda said the vaccine was safe for everyone.”

Last month, Europe’s drug regulator, European Medicines Agency’s (EMA), identified a rare blood condition known as Vaxzevria as a potential side effect of AstraZeneca’s COVID-19 vaccine. It urged those who previously had the capillary leak syndrome against receiving the shot.

In April, the vaccine was associated with very rare and potentially lethal cases of blood clotting that come with a low platelet count.

The World Heath Organization said in March that “the benefits of the AstraZeneca vaccine outweigh its risks and recommends that vaccinations continue.”

According to Rolling Stone magazine, Clapton does not have any shows scheduled in the United Kingdom until May 2022. The musician has upcoming shows in North America this September.