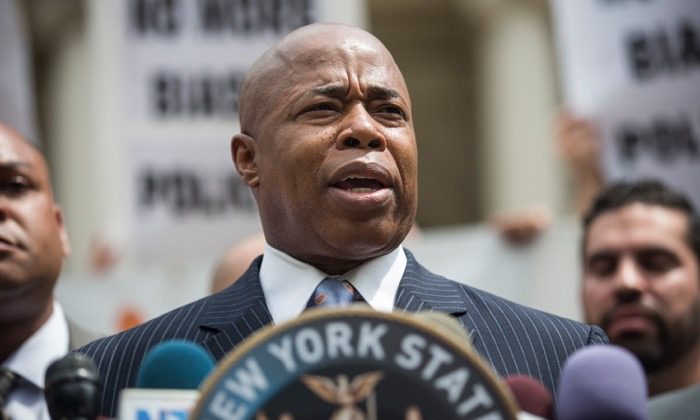 “Today we petitioned the court to preserve our right to a fair election process and to have a judge oversee and review ballots, if necessary,” his campaign said in a statement. “We are notifying the other campaigns of our lawsuit through personal service, as required by law, because they are interested parties.”

Adams, the Brooklyn Borough president, called on “other campaigns to join us and petition the court as we all seek a clear and trusted conclusion to this election.”

The city’s Election Board, which is run by Democrats and Republicans, on Tuesday night said it inadvertently added some 135,000 so-called “test ballots” to the count, throwing the process into disarray. The agency released the data as part of a simulation of how ranked-choice voting would play out following the initial count of votes.

Adams, a former police officer, had emerged as the Democrat frontrunner following the initial vote count on Primary Day last week. But he lost much of his lead and was ahead of Kathryn Garcia, the city’s former sanitation commissioner, by about 15,900 votes, or around 2 percent, after the Board of Elections released the latest data on Tuesday.

Adams’ campaign publicly pointed out the vote discrepancy shortly after the faulty count was released.

Later, in a statement at around 10:30 p.m. ET, the Board said that the 135,000 ballot images it placed into its election systems for testing reasons were never cleared.

“The Board apologizes for the error and has taken immediate measures to ensure the most accurate up to date results are reported,” the statement read. As a result, the results that were initially released earlier in the day were withdrawn.

“We are aware there is a discrepancy in the unofficial RCV round by round elimination report. We are working with our RCV technical staff to identify where the discrepancy occurred. We ask the public, elected officials and candidates to have patience,” the elections agency also wrote in a tweet.

Former President Donald Trump also weighed in on the issue, saying “based on what has happened, nobody will ever know who really won” the primary race.

“Watch the mess you are about to see in New York City, it will go on forever,” said the former president in a statement. “They should close the books and do it all over again, the old-fashioned way, when we had results that were accurate and meaningful.”