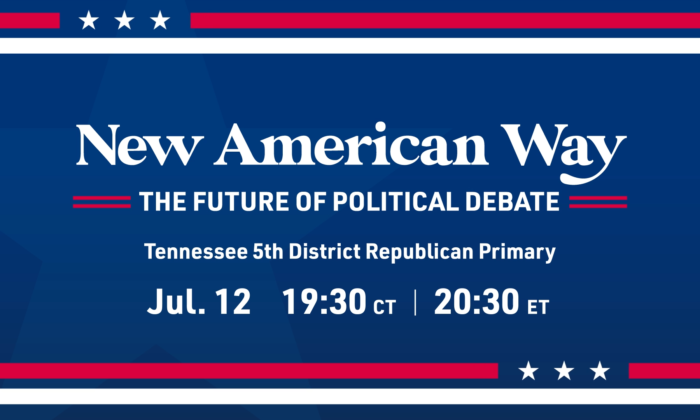 If it’s not one thing, it’s another. Didn’t your grandmother tell you that?

So I decided to keep it simple: Is the moderator prepared?

When some months ago my wife Sheryl Longin, first vice president of the Nashville Republican Women besides being a writer herself, came up with the idea of replacing biased reporters in our distasteful and useless political debates with actual domain (subject matter) experts to ask the questions, I thought, wow, that’s pretty interesting.

So I picked up the phone and called senior editor Jan Jekielek, who, between the 900 other things we all knew he does, thought it was a great idea too, and here we are.

We decided to try out—you might even say “beta” or “pilot”—this new approach with a Republican primary debate in the recently redistricted (in the direction of the GOP) Tennessee 5th Congressional District—parts of Davidson (Nashville), Williamson, and Wilson counties as well as all of Maury, Marshall, and Lewis counties.

It would be live-streamed to the world by Epoch TV and broadcast on television on The Epoch Times sister media, NTD.

I volunteered to be the moderator. Little did I know …

When you do something that has been done before, you have some guidance. When you do something never done before, at least this way, to some extent you’re flying blind. Add to that the normal frenzy of television and film production when everything that could go wrong often does, frequently at the last minute, you’ve got a potential prescription for a Mad Moderator, diary or not.

The first thing we had to do was gather our candidates and experts, an exercise in the proverbial herding of cats that’s still going on.

Gathering the experts wasn’t all that hard. Aside from the fact that Wilfred Reilly, the initial education expert, had to bow out at that last moment for a justifiable cause, most wanted to do it. Some of the biggest names—Gordon Chang (foreign policy) and Hans von Spakovsky (electoral integrity) signed on almost instantly, intrigued by the idea, as did Jeffrey Tucker (economy) well known hereabouts.

Late additions were the brilliant Carol Swain (replacing Reilly on education) and—I found this quite intriguing—the former acting director of U.S. Immigration and Customs Enforcement, Ronald Vitiello, of course on the border and related crime issues.

The candidates were another matter.

It was almost as if some of them were scared to face people with actual knowledge. They might even have preferred the usual biased reporters with their usual skewed “gotcha” questions. At least it was predictable. Part of the game.

We relied on our partners in the Young Republicans of Nashville and of Williamson counties for a manageable list of candidates to be invited among those the Republican Party had authorized to be on the ballot. The Young Republicans had been following the various polls and gave us the names of Beth Harwell, Andy Ogles, Kurt Winstead, Jeff Beierlein, and Tres Wittum. They were all invited.

Harwell ultimately declined in favor of a Washington DC Chamber of Commerce fundraiser for her she said could not be moved, but the other four gave their commitments to debate, both personally and through their representatives.

As they say … that was then, this is now.

From the retired National Guard Brigadier General Winstead, who declared his excitement to debate personally, face-to-face, to our representative as recently as Saturday, came a message only hours later, via his representatives, that he would not not be coming due to a “conflict” with an event the representative said had expanded. We had previously actually moved the debate back a half hour as a favor to Winstead just to avoid that same conflict. Nevertheless, he will not be debating Tuesday evening.

The good news, however, is that it’s already clear that our debate will be the best attended by far of any in the 5th Congressional District contest. Indeed, it’s likely to be the best-attended political debate in the Nashville Metro of any sort in some time, even without the Epoch TV and NTD livestreams and the NTD broadcast that should add many multiples.

Several hundred in-person tickets are already gone, but, if you’re in the area, some are still available at Eventbrite. Just type “EPOCH” in the search.

If not, we hope you’ll tune in to the livestream on Tuesday, July 12. The link and times in your zones are here.