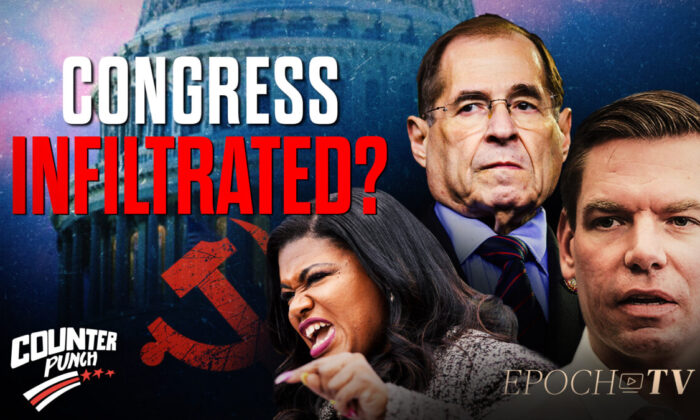 Epoch TV Review: The Most Powerful Committee in Congress is Run by Communists

Is Congress run by the American people, or by our communist enemies? Don’t miss the latest episode of Counterpunch with Trevor Loudon, where he continues to expose the ongoing worldwide communist revolution. In this episode, Loudon takes an in-depth look at the United States Judiciary Committee, and the blatant ties between its members and various communist organizations.

For many years, the Judiciary Committee, which oversees the FBI and the Justice Department, was headed by former Rep. John Conyers (D-Mich.). During his time in power, Conyers abolished the House Internal Security Committee, which Loudon says was the last line of internal defense between the United States and Soviet and other communist operators. He was a member of Democratic Socialists of America, a blatantly Marxist organization, as well as a longtime Communist Party USA supporter of over 50 years. Conyers was also heavily involved in the World Peace Council, which is one of the Soviet Union’s main international communist fronts. He also worked to protect the Muslim Brotherhood in America, which has worked with communist and terrorist organizations across the world. Conyers even played a role in stopping a congressional initiative seeking to designate the Muslim Brotherhood as a terrorist organization. Despite being a staunch communist supporter and a Marxist, Conyers served on the judiciary committee and influenced public policy for several decades.

Former Rep. Luis Gutierrez (D-Ill.) also served on the judiciary committee until very recently. He was a former member of the Puerto Rican Socialist Party, which is a pro-Cuban, Marxist organization. He worked closely with the Freedom Road Socialist Organization in Chicago, as well as the League of Revolutionary Struggle, both pro-Chinese communist organizations. He also supported organizations and figures worldwide that were deemed terrorist organizations by the U.S. State Department.

Another concerning member is Rep. Judy Chu (D-Calif.). Chu is a longtime supporter of the Communist Workers Party, which was the most militant pro-Chinese communist party of the 1980s. She still has ties with Communist Workers Party members today, as well as a history of regular visits to China. She was involved with the Committee of 100, which is one of the Chinese Communist Party’s main influence operations in the United States where it works to target businesses and politicians in order to move them in the direction China would like.

Currently, the head of the Judiciary Committee is Rep. Jerry Nadler (D-N.Y.). Nadler, who attempted to impeach President Trump twice, is also a long-time member and supporter of Democratic Socialists of America. He was involved in its predecessor organization from at least 1977, and actively involved from the 1980s through the 2000s. He also serves on the board of a Democratic Socialists of America front, called The National Jobs for All Coalition. During the Clinton Presidency, Nadler worked with Clinton to pardon a woman who was in prison for possession of explosives and who also played an active part in a communist terror organization. This woman now serves as a fundraiser for Black Lives Matter. For anyone who has wondered why the FBI was not very successful in tracking down rioters during the Black Lives Matter protests, Loudon says, “they were basically out there trying to track down the friends of their boss.”

Rep. Eric Swalwell (D-Calif.) also serves on the Judiciary Committee, as well as on the Intelligence Committee. During his time as a city council member, Swalwell met and became romantically involved with a woman named Christine Fang, who became active in his campaign and played a vital role in getting him elected to congress. Fang was later exposed as a Chinese spy.

Rep. Karen Bass (D-Calif.) served in the Black Panther Party, which was a pro-Chinese and pro-Maoist group. She also was a member of Line of March and Democratic Socialists of America, and was mentored by a very senior Los Angeles communist member. Having been to Cuba at least 16 times, Bass also has associations with Cuban intelligence organizations that worked to recruit likely candidates as spies in America.

Rep. Jamie Raskin (D-Md.), son of Marcus Raskin, also serves on the judiciary committee. His father was the founder of the very first hardcore left-wing think tank that worked with Cuban and Soviet intelligence for years. Jamie has been involved in the think tank, as well as other pro-Chinese communist groups.

The last member that Loudon exposes is Rep. Cori Bush (D-Mo.) Bush is a Black Lives Matter protestor, with close ties to Liberation Road, the pro-Chinese communist group that caused so much destruction after the Michael Brown killing in Missouri. She is a card-holding member of the Democratic Socialists of America, and holds close ties to the Communist Party in Missouri.

“The judiciary committee is chock-full of communists and socialists,” Loudon concludes. “There’s at least 100 of them that I believe couldn’t pass a basic background check to drive a school bus in any county in this country. But there are no background checks in Congress.” With little to no scrutiny from the media, these elected officials skate by, untouched by the FBI and unbeknownst to the public.

Loudon says these congress members are the reason for so many detrimental policies, such as the Nuclear Deal with Iran, open borders, the energy industry being shut down, kids being indoctrinated in schools, and the United States military being torn down while Russia and China build themselves up. They are the reason so many things have gone wrong. The communist party has infiltrated the United States Government to the point where they are able to control the very policies set in Congress. Although many would think this development would warrant FBI attention, a proper investigation simply is not happening. “The FBI is too busy chasing down people who took selfies in the capitol building rather than the thousands of Black Lives Matter protestors who, on behalf of China, burned cities all over America,” says Loudon.

Loudon examines what would happen if the FBI decided to do its job and protect America from the treason and damage being done to the country. He points out that in order to do this, the FBI would have to go to their own bosses on the Judiciary Committee and explain to Nadler that they want to investigate his friends and colleagues, including himself. What would happen to the FBI budget and pensions if they did this? “The FBI is not up for that war,” laments Loudon. “They should be, because that war is the only thing that’s going to save this country.”

The FBI was created to protect the United States from this very thing, yet the FBI is not only failing to protect the country, but it is also working with the communists and against patriots. Loudon says that “we need a clean-up, but we are not going to get that clean-up until the public are aware of the situation.” Loudon urges his listeners to be aware, saying that the problem of communist infiltration into the United States Government is worse now than ever before. We the People need to call the problem out, and demand our elected officials conduct a massive clean-up of the FBI, the Justice Department, and of Congress.

Share this article so your fellow Americans can be aware and work together to save the country from the communist takeover attempt happening right within our government.