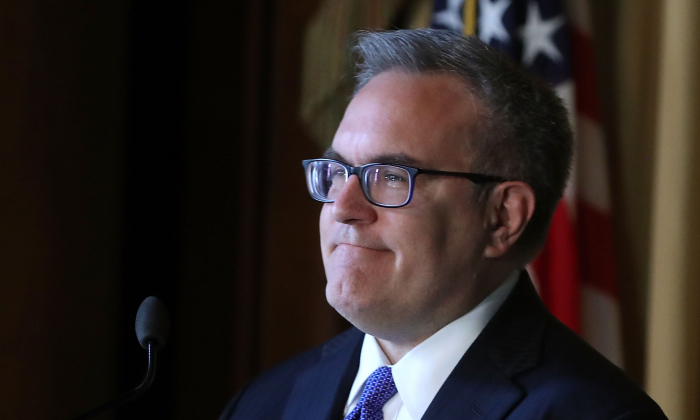 The Environmental Protection Agency’s acting administrator Andrew Wheeler said on Tuesday that the agency wanted a “50-state solution” to the nation’s vehicle emissions standards and would also pursue reforms to the country’s biofuel policy.

The comments were among the first by Wheeler on such policy issues since Scott Pruitt resigned as EPA administrator earlier this month.

The Trump administration is expected as early as Thursday to propose revoking California’s power to set state vehicle emissions rules, a government official briefed on the matter said.

California received a federal waiver under the 1970 Clean Air Act, enabling it to impose its own fuel efficiency standards. The states that followed its lead, including New York, Massachusetts, and Pennsylvania, do not have such waivers.

Under President Barack Obama, three disparate sets of fuel efficiency rules were tightened to match those already in place in California. The California Air Resources Board has warned that if the Trump administration adjusts the rules, it will lead an effort by 14 states to impose their own, tighter, local regulations.

The Obama administration tightened fuel-efficiency rules despite a Harvard-Brookings study showing that the goals of the measure caused a 14 to 27 percent increase in traffic deaths due to car downsizing. In 1996 alone, the corporate average fuel economy (CAFE) standards caused an estimated 2,700 to 4,700 deaths, according to the Competitive Enterprise Institute.

The original intent of the fuel efficiency standards was to reduce oil consumption at a time when the United States was heavily dependent on foreign oil. That is no longer the case as the country is on track to become a net energy exporter by 2026, according to a study by the Energy Information Administration.