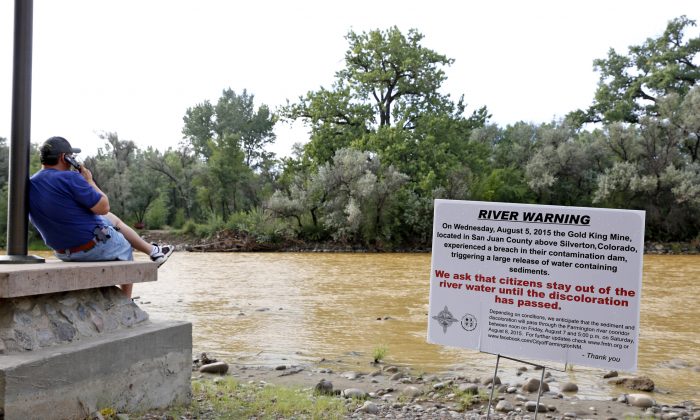 A warning sign from the city is displayed in front of the Animas River as orange sludge from a mine spill upstream flows past Berg Park in Farmington, N.M., Aug. 8, 2015. (Alexa Rogals/The Daily Times via AP)
Environment

EPA Mine Spill Was Preventable, Points to Broader Problem

BILLINGS, Mont.—Investigators are blaming the U.S. Environmental Protection Agency for a 3 million-gallon wastewater spill from a Colorado gold mine, saying an agency cleanup crew rushed its work, failed to consider the complex engineering involved and ended up triggering the very blowout it hoped to avoid.

Members of Congress seized on the results of the two-month Interior Department investigation to slam EPA’s handling of a spill that fouled rivers in three states.

The Aug. 5 accident has revived a long-simmering debate over the unresolved fate of hundreds of thousands of abandoned mines across the U.S, offering ammunition to both sides.

Whereas Republicans, including U.S. Sen. Cory Gardner of Colorado, focused their ire solely on the EPA, U.S. Sen. Michael Bennet, also of Colorado and a Democrat, coupled his criticism of the agency with a call for reforms that could speed mine cleanups.

The Colorado spill would have been avoided had the EPA team checked on water levels inside the inactive Gold King Mine before digging into its collapsed and leaking entrance, a team of engineers from Interior’s Bureau of Reclamation concluded in a 132-page report released Thursday.

Abandoned hard-rock underground mines are not subject to the same federal and state safety requirements other mining operations must follow, and “experience indicates that they should be,” the report concluded.

“A collapsed flooded mine is in effect a dam, and failure must be prevented by routine monitoring, maintenance, and in some cases remediation,” the engineers wrote. “However, there appears to be a general absence of knowledge of the risks associated with these facilities.”

The findings have implications across the United States: Similar disasters could lurk among the many abandoned mines that have yet to be cleaned up.

The total cost of containing this mining industry mess could top $50 billion, according to government estimates.

The root causes of the Colorado accident trace back decades, when mining companies altered the flow of underground water through a series of interconnected tunnels in the extensively mined Upper Animas River watershed, the report said.

EPA documents show its officials knew of the potential for a major blowout from Gold King, located north of Silverton, Colorado as early as June 2014. After the spill, EPA officials described the blowout as “likely inevitable” because millions of gallons of pressurized water had been bottling up inside the mine.

The Interior report directly refuted that assertion. It said the cleanup team could have used a drill rig to bore into the mine tunnel from above and safely gauge the danger of a blowout.

Instead, the EPA crew, with the agreement of Colorado mining officials, assumed the mine was only partially inundated.

10 Mining Sites Where Work Has Halted After Colorado Spill

EPA, Colorado Officials Knew Gold King Mine Could Blow Out

“This error resulted in development of a plan to open the mine in a manner that appeared to guard against blowout, but instead led directly to the failure,” the Bureau of Reclamation engineers wrote.

EPA spokeswoman Nancy Grantham said the agency did not use a drill rig to bore into the mine because of difficult conditions at the site high in the San Juan Mountains. An internal EPA review “identified technical challenges, safety, timing, and cost as factors in considering this technique,” she said.

EPA officials pointed out that Gold King’s entrance already was leaking and could have eventually blown out anyway. The Interior report acknowledged that was possible.

The blowout tainted rivers in Colorado, Utah, New Mexico — and on the Navajo Nation — with dangerous heavy metals including arsenic and lead. It temporarily shut down drinking water supplies and cropland irrigation.

On Thursday, Navajo President Russell Begaye said the Obama administration had denied a request for an emergency declaration for the tribe over economic damage caused by the spill.

The Interior report stopped short of assigning fault to any individuals, despite prior claims from EPA Administrator Gina McCarthy that it would determine fault and any negligence.

Colorado Gold King Mine Far From the Only Leak

U.S. Rep. Scott Tipton, a Republican whose district includes the Gold King, called the report disturbing in part because it revealed the EPA lacked the technical expertise to address the complexity of the mine. “Obviously a glaring weakness,” Tipton said.

With abandoned coal mines, monitoring and cleanups are funded in part by a fee companies pay. No such arrangements exist for inoperative hard-rock mines, and that’s a national problem, the report noted.

Given industry opposition to efforts to hold mine owners accountable, the cleanup on hard-rock mines such as Gold King has been left to a scattering of federal and state agencies, without common standards or even lists of the most problematic mines.