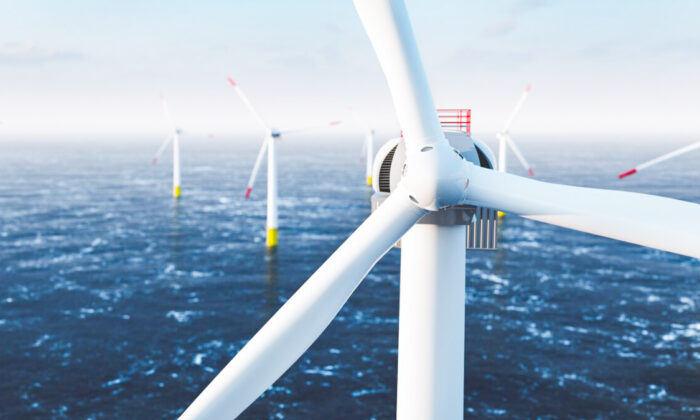 A new report shows that many high-profile environmental organizations take money from wind power companies, raising questions about their independence and objectivity as the Biden administration pursues large-scale offshore wind projects along the coasts of the United States.

Titled “Conflicts of Interest,” the report was produced by the Save Right Whales Coalition, a group concerned about the potential impact of industrial-scale wind on the endangered North Atlantic right whale.

“Our investigation sought to understand why environmental groups that have worked vigorously to protect right whales have gone silent in the face of massive industrialization of right whale habitat. If the money flow is influencing the actions of these environmental groups, the public deserves to know,” said Lisa Linowes, who belongs to the Save the Right Whales Coalition.

At least $4.2 million in donations are documented in a spreadsheet examined by The Epoch Times.

Ørsted also donated an undisclosed sum to the World Wildlife Fund (WWF), as proudly advertised on its sponsorship webpage.

The National Audubon Society, known for its bird conservation advocacy, has also accepted funding with ties to the wind industry.

Both the National Audubon Society and Maine Audubon received hundreds of thousands of dollars from the New England Forests and Rivers Fund, which is financed in part by Avangrid and Eversource, both of which have large wind power portfolios.

Many consider wind turbines highly dangerous to birds and bats.

While a study financed by the pro-wind energy nonprofit American Wind and Wildlife Watch estimated there were just 214,000 to 368,000 wind turbine-related bird fatalities in the United States and Canada, many other studies have arrived at higher estimates.

“Planners, decision-makers, and wind turbine operators should regard most, if not all, existing mortality estimates at wind farms as highly imprecise and potentially biased low,” wrote researcher Shawn Smallwood in his own study, which estimated bird and bad wind turbine fatalities at an average of 573,093 per year in the United States. (Smallwood’s study was funded by the National Renewable Energy Lab and the California Energy Commission).

“We are concerned that financial conflicts of interest are interfering with your analysis of offshore wind projects,” coalition members wrote in an open letter to the organizations and firms named in the report.

Linowes, who also serves as executive director of WindAction Group, told The Epoch Times she is concerned about the lack of data on the long-term ecological impact of wind installations.

She worries that environmental groups with financial ties to Big Wind will not push hard enough to get to the truth.

Linowes cited a 2021 hearing in the United Kingdom’s House of Lords at which expert witnesses testified regarding the possible environmental effects of such installations in the North Sea, already an environmentally degraded habitat.

“We are talking about, effectively, [urbanizing] the sea by introducing all these structures,” said Melanie Austen, a Professor of Ocean and Society at the University of Plymouth, during that hearing.

“The marine plans and the knowledge base around large-scale impacts of marine renewables are not keeping pace,” Austen later added.

“Americans have come to expect environmental groups to be voicing the same concerns, but it’s not happening,” Linowes told The Epoch Times.

The Save Right Whale report quotes Woods Hole marine ecologist Mark Baumgartner, who told The Washington Post that “we already have a fairly industrialized ocean, with shipping traffic and fishing activities. Adding these large wind farms with many, many, many turbines is certainly concerning.”

Linowes acknowledged that an FAQ on her group’s website that claimed “it is documented that replacing the soft sea bottom with wind turbines has led to a loss of sand eels” overstated the conclusiveness of that link.

“The best available scientific information shows that the North Atlantic right whale population cannot withstand any additional stressors; any potential interruption of foraging behavior may lead to population-level effects and is of critical concern,” wrote representatives of multiple environmental groups in a letter expressing concern about the impact of surveys for offshore wind.

Linowes and her colleagues referenced that missive in their own open letter.

Linowes told The Epoch Times she has not heard from the groups named in the report.

“I think they want us to go away,” she said.

The Epoch Times has also reached out to the American Clean Power Association, a group representing the wind industry.