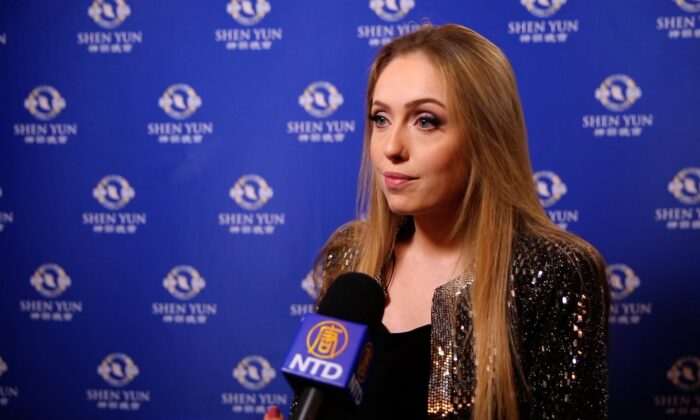 MANCHESTER, England—For 5,000 years, China has thrived under a divinely-inspired culture—a culture that Shen Yun Performing Arts brings to audiences around the world.

During a performance at the Palace Theatre in Manchester, sitting among the audience was Sophie Tomlinson, an entrepreneur, who felt she was transported to another world through the performance.

Shen Yun is based in New York, started back in 2006 by Chinese artists with the mission to revive the traditional culture that prevailed through China for 5,000 years. Shen Yun expresses this through the use of classical Chinese dance and music, and stories that derive from ancient myths to modern-day tales.

“It’s just magical, it’s breath-taking, the colors are just incredible and it really transports you to another world,” Tomlinson said.

She was brought to tears during one of the programs in the first half of the performance—which conveyed a scene of persecution—and said she was blown away the courage the characters exhibited.

“I did cry … I wasn’t expecting that,” Tomlinson said.

“I think it was really amazing to bring it into the show and let everyone know around the world that there are problems,” Tomlinson said.

Shen Yun states on its official website that its performances feature the most well-trained classical Chinese dancers, a harmonious blend of both Western and Eastern musical traditions in the orchestra, as well as beautifully designed animated backdrop.

Shen Yun, as the website puts it, can be separated into two words, “shen” and “yun” meaning divinity and feeling or rhythm respectively. Together, it means “the beauty of heavenly being dancing.”

Tomlinson called the performances uplifting and commented that there was something different about Shen Yun.

“You can really see it in their eyes and their faces, you’re just drawn to them, it’s really, really uplifting, really amazing, really different. I watched a lot of dance and there’s something definitely different and distinctive about Shen Yun,” Tomlinson said.

“I loved the perfection it takes to do with a step at a time, and just the humility to keep practicing that until it’s second nature …[it] blows you away,” she said.

Tomlinson went on further to say that there was a purity to Shen Yun, something that she had never seen before.

“There is a purity to it, and … the colors, there is something I’ve never seen before and the special effects are really intriguing,” she said.

Tomlinson felt lucky to have been able to see Shen Yun, and because Shen Yun can only be performed in countries outside of China, she called Shen Yun’s mission very important and vital.

“I think it’s very important. The mission is sad and they have to do it outside of China, but that’s the way things are and so it’s really vital time—more than ever—to do this, so we’re very lucky that you came over to see us,” she said.

With reporting by NTD Television and Paula Liu.