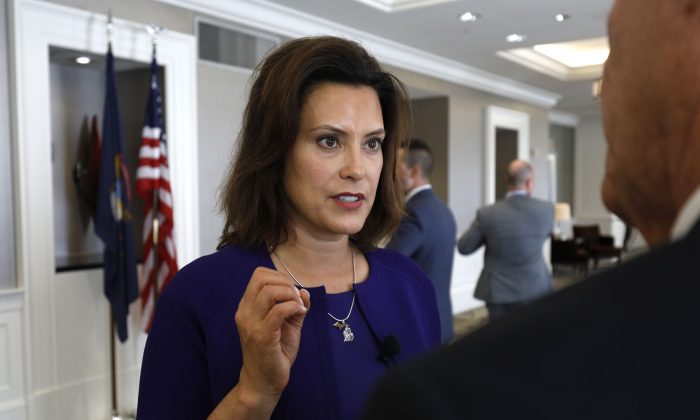 A judge in Michigan has denied a bid by three former Wolverine Watchmen to have their charges dismissed in an alleged plot to capture Gov. Gretchen Whitmer, ruling that the presence of undercover FBI informants and agents didn’t amount to entrapment.

Jackson County Circuit Court Judge Thomas Wilson made his ruling March 1, following a two-day entrapment hearing for Joseph Morrison, Pete Musico, and Paul Bellar. The defendants—who face charges under Michigan law of providing material support to a terrorist plot—will still have their chance to convince a jury that the FBI entrapped them, with their state trial set for Sept. 12.

Meanwhile, the federal trial for the alleged ringleaders of the purported Whitmer kidnapping plot is set to begin March 8. Those defendants—Adam Fox, Barry Croft, Daniel Harris, and Brandon Caserta—had their own motion to dismiss denied in January.

For the first factor, Wilson said he only had to consider the case of Bellar, who left Michigan and abandoned the Wolverine Watchmen in July 2020 because of concerns over the alleged plot leader, Fox.

“But even though he left Michigan two months prior to arrest, this was not a long period of time that lapsed between investigation and determination by FBI that they had enough to go forward,” Wilson said about Bellar.

As to whether the FBI encouraged the defendants to commit a crime, Wilson said the Watchmen were already predisposed to their alleged actions. Wilson looked at the Watchmen’s former Facebook page to support his assertion, noting that it was trying to recruit people who support the “boogaloo”—a reference to a second American civil war.

“I just cannot, in reviewing this matter, infer that the government somehow pressured any one of these individuals to participate in anything, or to get in line with this way of thinking,” Wilson said. “That was the very reason we got the [FBI informant] in the beginning: As soon as he joined the group and learned they were talking about harming police officers and politicians, he contacted the FBI.”

Wilson said he took the same view of the main FBI informant under scrutiny during the entrapment, referred to in court documents as “Dan.” An Iraq War veteran who would go behind enemy lines to help find targets for airstrikes, he was code-named “Thor” by the FBI in its investigation.

During the hearing, defense attorneys argued that the FBI gave “Dan” the code-name “Thor” because the defendants would see him as a god, due to his military expertise. This allowed “Dan/Thor” to manipulate the Watchmen, the defense attorneys said.

But Wilson disagreed, saying that he failed to find any instances where “Dan” provoked the defendants to violence.

“I reviewed a lot of paperwork in this matter, and I can’t find anywhere where ‘Dan’ increased the culpability of the defendants,” Wilson said. “In fact, a couple times ‘Dan’ deescalated the situation.”

A pretrial hearing is set for Aug. 8.