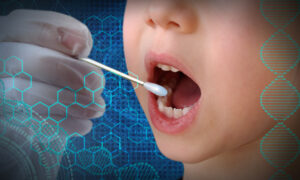 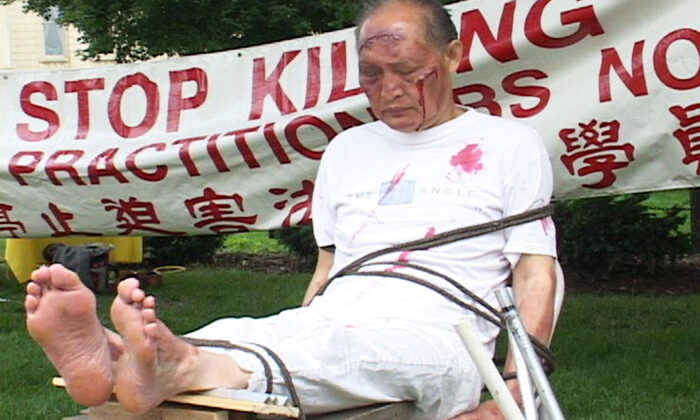 Reenactment of the "Tiger Bench" torture method that is routinely used to persecute prisoners of faith in Chinese detention centers and labor camps. (Courtesy of Minghui.org)
People

An entire family in China has been tortured to death in the Chinese Communist Party’s (CCP) ongoing persecution of faith, leaving behind a 13-year-old boy.

Even before the young boy was born, his parents had been arrested and persecuted multiple times because of their faith in Falun Gong (also known as Falun Dafa), a traditional Chinese self-cultivation and discipline that has been violently persecuted by the CCP since July 1999.

Over 13 years ago, new mother Yang Xue, her 9-month-old baby son, and her persecuted elderly mother were brought into a detention center in Suizhong County, Liaoning province, where they learned Yang’s husband had died in police custody, reported the Falun Dafa Information Center.

Fan Dezhen, who weighed 150 pounds and was healthy before the arrest, was 55 days into his detention when he died; he was only 33 years old.

When Fan’s family saw his dead body in the morgue, they were left in shock. His face was twisted, eyes wide open, limbs bruised, and anus loose; there was an inch-long cut on his abdomen, and he was merely skin and bones. The family inquired about his severely bruised body, but a guard said, “Dead people are all like this!”

In the years that followed, Yang’s parents, too, were persecuted to death for the same reason. Last year in November, Yang herself succumbed to death at the age of 41 after enduring years of abuse and distress. Their teen son is now orphaned and left to fend for himself in the communist country.

The family tragedy resulting from the CCP’s persecution detailed in this report is just one of the countless many where young children are left orphaned after their families are persecuted to death for refusing to give up their faith.

Yang, who studied fine arts at Yanshan University in Hebei province, worked as a designer in Shenyang, Liaoning province, before returning to her hometown in Suizhong County to work as an art teacher.

She and her husband—like millions of other Chinese people—practiced Falun Gong. However, after former CCP leader Jiang Zemin launched a nationwide campaign of persecution to eradicate the peaceful practice in July 1999, countless law-abiding adherents were pronounced “state enemies” overnight, leading to mass arrests across China.

Fan decided to stand up for his spiritual belief and honor his fundamental right to freedom of faith, so he went to Beijing in 2001 to appeal for his rights to practice. However, he was detained at the Huludao City Labor Camp, Liaoning province, for a period of three years.

To coerce him into renouncing his faith, prison guards shocked him with electrical batons and brutally beat him. The persecution deformed his face and left his body injured and swollen.

In October 2002, Fan went on a hunger strike to protest the persecution. Guards ordered criminal inmates to force-feed him after cuffing his wrists and shackling his ankles onto a metal bed frame all day. During one of the torture sessions, a feeding tube that was forced into Fan’s lungs almost choked him to death.

As Fan’s health deteriorated, the officials released him to avoid being blamed for his condition. After a period of time, to escape constant harassment from communist officials, Fan left his home and did odd jobs in order to make ends meet. However, he still couldn’t escape police monitoring and surveillance.

In 2004, when visiting another Falun Gong adherent’s house, a police officer who was already waiting inside the house arrested him. He was arrested for the second time and detained in Huludao City Detention Center, and was again mercilessly beaten and force-fed. He wasn’t released until he’d been persecuted to the brink of death, once again.

His third arrest occurred on Sept. 17, 2005, when he was working on the second floor of Huludao City House Appliance Shopping Mall and a few plainclothes police arrested him at 2:00 p.m. During his second detention at Huludao City Labor Camp, he was again tortured brutally before being released.

His last arrest before dying was on Feb. 25, 2008. The Suizhong County Domestic Security Division had arrested both Fan and his wife along with 11 other Falun Gong adherents on that day.

Fan’s mother-in-law, Yi—who herself had faced detention and persecution at the infamous Masanjia labor camp in 2001—fainted on hearing the news. After she regained consciousness, she questioned Wang: “I just came here six days ago and delivered 200 yuan for him. When I asked you how he was doing, you told me he was having two meals each day and was in good spirits. How did he just die suddenly?”

However, another police officer angrily told the family: “Even if we beat him to death, what can you do?”

Later, in the morgue, Fan’s father demanded to videotape his deceased son’s bodily injuries, but the guards refused and announced that the cremation would happen the next day. At the crematorium, officers demanded family to sign the cremation agreement, which had fabricated details of the death.

The family refused to comply and said, “He was tortured to death, why should we sign it? He died at your place, you should be responsible for it!” To which the head of the detention center replied that they have no evidence.

Yi insisted on hiring a lawyer to investigate the cause of her son’s death. However, the guards cremated Fan’s body that day without his family’s consent.

Fan’s elderly in-laws were not spared persecution, either. Yi, despite her old age, was constantly harassed; her condition dramatically worsened after Fan’s death in 2008. In 2011, Yi was once again arrested for her faith. She died at the age of 59, on April 20, 2013. A year later, Yi’s husband, who was in his 60s, also died.

Yang’s family tried seeking justice for Fan, but authorities refused by saying that “no one would dare to investigate the case.” In order to block Fan’s wife from filing more complaints to readdress the case, the authorities in Suizhong sentenced Yang to prison for four years. As she was still breastfeeding her son, she was allowed to serve prison time at home.

Faced with continued harassment, Yang was often forced to go into hiding. While her young son, who grew up without a father, would consider every kind man who bought him gifts or treated him nicely as his dad.

Her teen son is left without a family.