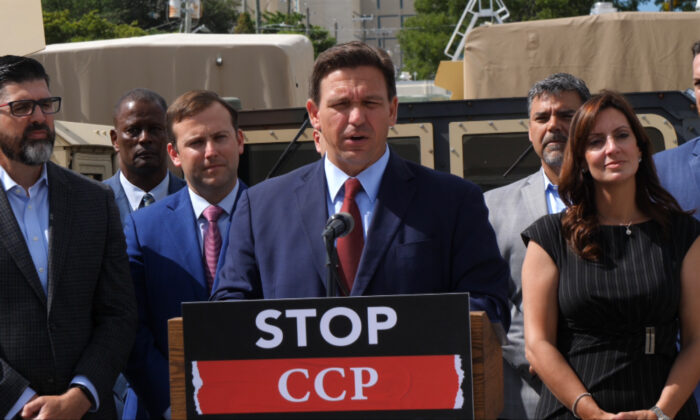 Florida Gov. Ron DeSantis signed two pieces of legislation on June 7 designed to combat the influence of communist China in the United States.

“If you look right now, there is no single entity that exercises a more pervasive nefarious influence across a wide range of American industries and institutions than the Communist Party of China,” the Republican said during a press conference in Miami.

“All we are doing today is saying, ‘Enough is enough.’ We’ve got to start fighting back, and so the state of Florida is doing that,” he said.

One of the bills aims to cut the Chinese Communist Party’s (CCP) access to higher academic institutions—public and private—by prohibiting those entities from entering into agreements with the Chinese regime or companies with close state ties.

The bill will exclude Confucius Institutes, a controversial Beijing-backed program that has drawn scrutiny for its role in stifling freedom of expression on campus. It will also ensure that “all nation-states, corporations, organizations, and individuals seeking to engage with colleges and universities are fully vetted,” DeSantis said.

Florida shuttered the last Confucius Institute in the state in September 2019; 47 such facilities still remain in the United States.

“We don’t want bad actors involved in our colleges and universities, and we’ll hold you accountable if you run afoul of these new laws,” DeSantis added.

The second measure, called the Combating Corporate Espionage in Florida Act, would make stealing and selling trade secrets a criminal offense, DeSantis warned. Stealing or attempting to steal a trade secret for one’s own benefit constitutes a third-degree felony punishable by up to five years in prison, he said.

“If the same person tries to sell the stolen trade secret, they’ll face a second-degree felony with even more penalties,” he said, adding that the individual or entity would face even harsher penalties for acting on behalf of a foreign government.

He told The Epoch Times in an interview on June 7 that with the two bills signed into law, Florida has “the most robust protections against CCP influence that any state’s done so far.”

Both measures go into effect on July 1, he said.

At the press conference, the governor cited a number of recent federal prosecutions of Chinese individuals for “being in cahoots with the Chinese government.” That includes a University of Florida professor charged with secretly taking $1.75 million in U.S. taxpayers’ money to fund research for a firm he founded in China.

A Jacksonville woman who is the wife of a U.S. Navy officer pleaded guilty in September 2020 to helping smuggle military-grade equipment to China.

The National Institutes of Health said in April that it has flagged 500 researchers suspected of having financial ties with the CCP and other foreign adversaries. Examples like these haven’t gotten the attention they deserve, DeSantis said, adding that there’s a reason for that.

“There’s a lot of people in the United States who benefit from the largesse that’s provided by the Communist Party of China,” he told The Epoch Times.

While the CCP influence is pervasive in U.S. academia, the infiltration doesn’t stop there, he said.

“You look at corporate media, in the entertainment industry in this country, they are in the pocket of the Communist Party of China,” he said at the press conference. “They were on the vanguard of trying to suppress the truth about the lab leak theory.”

DeSantis also noted how Bing, a Microsoft-owned search engine, censored the iconic “tank man” image during the anniversary of the Tiananmen Square massacre; Microsoft later claimed that was a result of “accidental human error.”

DeSantis says it was a “pretty convenient mistake.”

“It’s amazing how these entertainment companies will genuflect to whatever the CCP wants. It’s amazing how corporate media in this country is very scared to hold them accountable. And you see that time and time again,” he told The Epoch Times.

DeSantis said he plans to see what difference the June 7 action makes.

“This is a long-term issue that we’re going to have to engage with, and we’ll continue to do it.”

Victoria Wu contributed to this report.