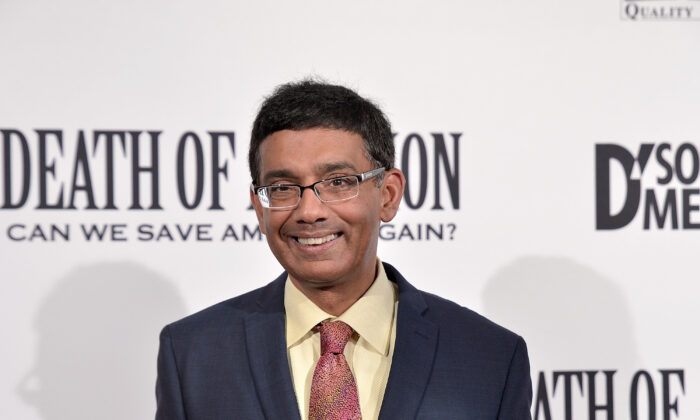 An analysis of cellphone records performed by an election intelligence group shows that thousands of fraudulent ballots were deposited in mail-in drop boxes during the 2020 election, an amount sufficient to change the outcome of the election, according to Dinesh D’Souza, director and writer of the documentary “2000 Mules.”

Many people, including D’Souza, were baffled by numerous anomalies occurring in the 2020 election, especially by the sudden stopping of the vote count on the election night followed by a remarkable turnaround the next morning, the filmmaker said.

However, he was reluctant to accept any supposition of fraud, thinking that “an anomaly is an unlikely event.” He considered that “Trump could have won the bellwether counties and somehow still lost the election. He could have gained with working-class voters and Hispanics, but maybe he lost more suburban voters.”

“There are scenarios in which I could see that it’s possible that Trump lost. It wasn’t obvious to me that Trump won,” D’Souza said on EpochTV’s “Crossroads.”

When D’Souza, a filmmaker, author, and daily podcaster, came across the information collected by an election intelligence organization called True the Vote, it piqued his interest. The group came up with a completely ingenious and novel way to look for fraud and to document it, he said.

True the Vote has the largest store of election data in the world, he said, noting that the organization purchased 10 trillion pings of cellphone data in five swing states occurring during the crucial days leading up to the election, from October 1, 2020, through Election Day.

“[The pings] were concentrated in only five areas, the greater Atlanta area of Georgia, the area of Phoenix, Maricopa County, Detroit, Milwaukee, and the greater Philadelphia area,” D’Souza said. “These are the five areas where the election was decided.”

True the Vote then used a kind of search algorithm to mine the data looking for mules, according to the filmmaker. The FBI and CIA use geo-tracking in the same way in their investigations, he said.

“The term mule is now commonly used in drug trafficking and sex trafficking. The mule is the middleman, the guy who makes the transport,” D’Souza wrote for The Epoch Times.

True the Vote borrowed this term to apply it to the paid professional operatives who engaged in dropping off illegal votes and who went to 10 or more mail-in drop boxes, he said.

The reason why mules went to at least 10 drop boxes was to ease the suspicion of election workers who open drop boxes every day and document the number of ballots deposited, the filmmaker said. If they found that one dropbox contained many more votes than the average number of votes dropped there or dropped in other boxes in the area, it would raise suspicions, he noted.

Therefore “the mules are instructed to … spread [the votes] around,” D’Souza said.

A rule of tracking only those who visited at least 10 drop boxes was adopted in order to eliminate mistakes, he said.

“It’s possible someone went to one dropbox and they sort of had to stop and tie their shoelace at the next dropbox.”

The researchers set the bar pretty high, according to D’Souza.

Where Illegal Ballots Come From

To find out where the mules got the votes from, the researchers investigated the connection between left-wing activist organizations deeply embedded in these urban areas where the mules operated, D’Souza said.

The purchased geo-tracking records showed that mules first stopped by at the left-wing organizations, collected a batch or a satchel of votes, and like a mailman, went on a route to drop off the votes, he said. The deliveries often occurred in the middle of the night, between 1 a.m. and 3 a.m.

To verify their findings, True The Vote obtained official surveillance videos from the states themselves, D’Souza said.

He noted that the mules seen on the videos were typically shrouded in hoodies, looked around to make sure they weren’t being observed, and then ran up to the dropboxes. Some of them wore gloves to avoid leaving their fingerprints.

Mules often take photos of their hands putting the ballot into the dropbox, according to D’Souza.

“They have to show proof that they were there and that they delivered the fraudulent votes,” he said. “That’s how they get paid, apparently. So all of this is on [surveillance ] video.”

D’Souza hopes showing these dealings in a movie makes “some demands on law enforcement because they’re the ones who have to act next.”

The documentary presents very rigorous math to assess the impact of the mules’ activity on the 2020 election. But even rough calculation based on the assumption that “2,000 mules stopped at an average of 40 or so drop boxes, dropping in an average of five ballots per drop” shows that a minimum of 400,000 illegal votes have been added, according to D’Souza. In Pennsylvania, an estimated 1,100 mules dropped ballots at nearly 50 drop boxes apiece, he said.

In all five swing states analyzed by True The Vote, Joe Biden’s winning margin varied from a narrow margin in Georgia (about 12,000 votes), Arizona (about 11,000 votes), and Wisconsin (about 21,000 votes) to a big margin in Pennsylvania (about 82,000 votes) and Michigan (about 155,000 votes), according to Reuters. If fraudulent votes dropped by mules were subtracted from the Biden’s column in these states, Donald Trump would have won them, D’Souza said.

However, the ballots dropped by mules can’t easily be associated with voter names because there’s no name on the ballot, and the envelope with the name and address of the voter is detached from the ballot during the counting process, he said. These two pieces can never be reunited, so there’s no way to identify fraudulent ballots.

Therefore, the researchers tried to identify the connection between mules and “left-wing organizations,” the filmmaker said. One finding was that a number of the mules were Antifa or BLM supporters.

To determine the mules’ affiliation with Antifa or BLM, the researchers analyzed geo-tracking data related to violent riots in Atlanta that coincidently occurred within the same timeframe and tried to match the cellphones of mules with the cellphones of riot participants, according to D’Souza.

He also noted that although election fraud dates back to the 19th century, the new election rules imposed because of the COVID-19 pandemic created favorable conditions for fraud.

There’s a difference between ballot harvesting, which can be permissible in some states to various extents, and ballot trafficking, which is permitted in no state, the filmmaker said.

In the swing states analyzed by True the Vote, the laws for ballot harvesting are more restrictive.

“In Georgia, for example, you can only give your ballot to a family member, or if you’re in a confined facility to your caregiver,” D’Souza said. “In no state, is it legal to pay anyone, let alone a mule, to deliver a vote … because when money comes into the process, you’ve contaminated the process; you’ve introduced the issue of bribery.”

If mules are paid to deliver ballots, those votes become fraudulent and illegal, and they can’t be counted, he said.

The involvement of money in mules’ activity has been confirmed by whistleblowers and has been revealed by a mule interviewed in the documentary, the filmmaker said.

Mules often took photos of their hands dropping a ballot into the box, which can be considered proof of completing their jobs for which they get paid, he noted, but it isn’t a selfie that says “I voted.”

“[Nonprofits] are prohibited by law from engaging in overt election activity,” he said.

Although those organizations aren’t named in the movie, the filmmakers have said that they’ll cooperate with any investigation by law enforcement.

“Without free and fair elections, we’re not a democracy, we’re basically a criminal cartel masquerading as a democracy,” D’Souza said.

He hopes that his documentary will encourage viewers to think about the evidence that it presents.

“This is not a movie in which you’re going to hear any shouting or insistences,” D’Souza said. “There’s a range of people expressing a range of views, but it allows you to see for yourself and think for yourself.

“I’m putting this information out because I want the American people to be the jury.”