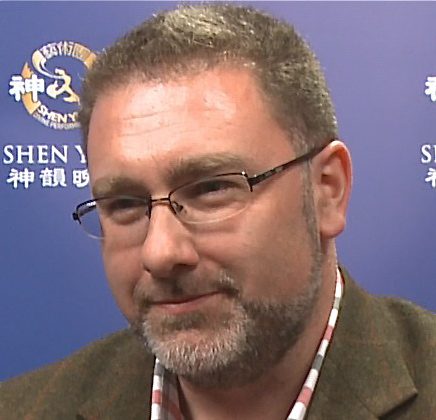 English National Opera Trustee: Shen Yun is ‘not like anything else you have ever seen’

LONDON—Being a BAFTA-winner and board member of the English National Opera means performing arts runs in the veins. And for Anthony Lilley OBE, Saturday afternoon’s performance of Shen Yun was a powerful experience.

Mr. Lilley, who is also a Royal Television Society and Peabody Award winning interactive media producer, attended the show with his wife, Ruth, and children Megan Jane and Tom.

He was impressed by the skills of the dancers and the excitement they create in the audience. “I think the athletic way in which the men dance is amazing,” he said, praising “the incredible synchronised nature of the movement” and “the great drama of it”.

His wife, Ruth, was equally enthusiastic: “It’s just spectacular, it’s a real spectacle and it’s fantastic to watch,” she said. “The opening is wonderful, it really catches your attention and just draws you in straight away.”

Five-year-old Megan Jane said she especially liked the dance How the Monkey King Came to Be, which features a key scene from the classic Chinese novel Journey to the West. “I liked it when he was in the tree grabbing all the peaches,” she said.

Mr. Lilley said that Shen Yun had held the attention of both their children. “We had two very small children who were fascinated and raptured by it all,” he said.

“Lots of the stories are very clear and eternal, stories everybody recognises—struggles and differences between people, and even my daughter who is only five, she could see good people and evil people, and a show that can do that is very powerful.”

He said he would remember the beautiful opening of the second act, which features flower fairies emerging as if from clouds.

He went on to say that Shen Yun Performing Arts is doing a wonderful job of introducing Chinese culture to Western people. “I think it’s a very exciting, very stimulating experience,” he said.

Mr. Lilley works in China and had just returned from a trip to Beijing and Shanghai. “It’s wonderful to see Chinese dance here in London,” he said. “It’s not like anything else you have ever seen.”