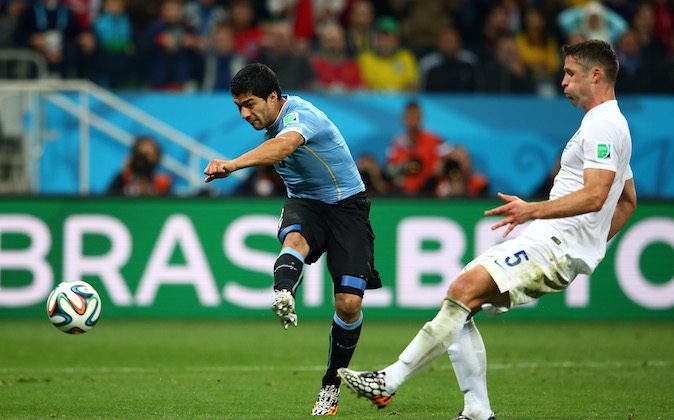 A post on Facebook saying England will get a “second chance” against Uruguay in the World because a referee was charged with match fixing is fake.

The website clearly has disclaimers and statements saying it isn’t real. The post appears to be from the BBC, but it’s just a trick.

“Create your own fake news and trick your friends by sharing it on Facebook, Twitter, or any other social network,” the statement reads.

It also adds: “Celebrities, show business and sports news seem to be the hottest topics. You need to be creative for your joke to seem real. This way you will be able to trick your friends!”

When one clicks the post, it then says, “Don’t worry, you are not the only one. [More than 1 million] people already fell for this. If you liked the joke, you can share it and trick your friends. Also you can create a joke of your own clicking the button below!”

On Twitter, a number of people shared the fake story, and many were wondering if it is legitimate.

The Associated Press update for Uruguay’s victory: England has no case for the defense at World Cup

RIO DE JANEIRO (AP) — No excuses. No one to blame but themselves. Feeble defending has left little hope for England at the World Cup.

Successive losses have left the team facing its most humiliating exit from a World Cup since 1958, and reliant on a victory over Costa Rica next week and a favor from Italy on Friday by beating Uruguay to have a chance of advancing from Group D.

Back in the 1950s, millions of pounds (dollars) weren’t spent on preparing the team, and the players weren’t supported by more than 50 staff members — as the 2014 squad are in Brazil. Pampered in Miami before heading to a beachside base in Rio de Janeiro after squad grumblings about the isolated South Africa HQ in 2010, the Football Association’s preparations were meticulous.

Everything the defending wasn’t in Brazil.

“We maybe should have accepted that going for a point might have been the best option,” captain Steve Gerrard said after Thursday’s 2-1 loss to Uruguay

Whether the England defense was up to grinding out a draw is questionable with the defenders at Roy Hodgson’s disposal. Although, given the back-to-back lapses against Italy and Uruguay, maybe England just doesn’t have international quality defenders anymore. Going back to Bobby Moore, England’s World Cup wining captain in 1966, solid center backs formed the bedrock of the team, with Terry Butcher, Tony Adams and Rio Ferdinand filling the position in later years.

Phil Jagielka (Everton) and Gary Cahill (Chelsea) play for teams which finished in the top five last season and appeared to have forged a solid international partnership, not losing any of their 13 internationals together before the World Cup. But they struggled to adapt to the most testing of football occasions, leaving Englandexposed too often in front of goal against Italy and Uruguay for four goals.

Mario Balotelli evaded Cahill with ease at the far post to head in Italy’s winner on Saturday. England didn’t learn against Uruguay, with Jagielka failing to close down Edinson Cavani before he chipped the ball to Luis Suarez, who shook off Cahill and headed home.

“They were sloppy goals (to concede) and we have to take responsibility for that as a team,” said Gerrard, who inadvertently flicked the ball on for Suarez’s second.

England was desperately lacking the leadership of John Terry marshalling the back four. Even at 33, Terry regained his form and his place into the Chelsea team, but turned his back on England in 2012 before being found guilty by the FA of racially abusing an opponent in a Premier League match. The only sight of Terry wearing the Three Lions jersey on Thursday was the picture he uploaded ahead of the Uruguay match on Instagram, wishing the team luck.

“When players retire, we move on,” was Hodgson’s message ahead of the World Cup.

However, the center backs aren’t the only ones to have looked shaky. Full backs have been able to break forward but less adept defending.

Antonio Candreva swept past left back Leighton Baines with ease before providing the cross Balotelli scored from on Saturday. Hodgson overlooked the more experienced Ashley Cole for the tournament, with the Chelsea defender rejecting a chance to be on the standby list after Luke Shaw was selected as Baines’ cover. It’s unclear why the promising 18-year-old Southampton player was brought to Brazil since he hasn’t featured in either game.

”I don’t think we have given up too many chances in the two games, but when we have, we have been punished,” Baines said. “The tournament has been a bit like that. There have been a lot of goals so far and we’ll have to look at it in the next couple of days.”

Although Glen Johnson set up Wayne Rooney’s first World Cup goal in the Uruguay match, the right back’s work in defense has been a constant concern over the last month with the lack of adequate cover.

For all England’s occasional flashes of pace and creativity at the front, predominately against Italy, the team always looked too fragile at the back. Not that Hodgson’s tactics were faultless. Pushing Raheem Sterling to the left flank against Uruguay having been so dynamic in the No. 10 playmaker role against Italy, allowed Rooney to return to his favored central position but meant the Liverpool player’s impact was more limited.

“I have played in teams a lot worse than this and come away with a win,” was Cahill’s verdict.

However, by the time England plays Costa Rica in their final match in Group D on Tuesday, the plane could be preparing to take the team home.