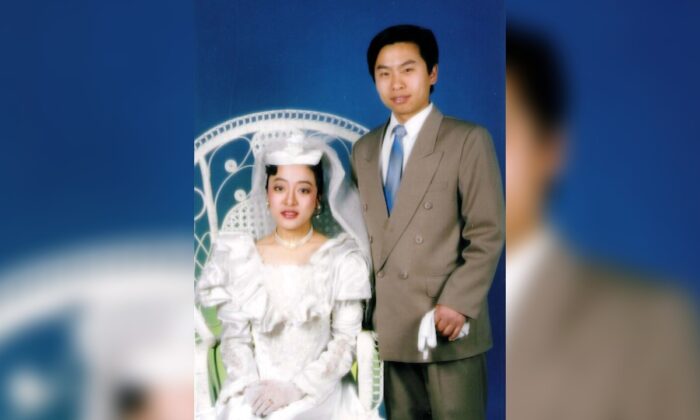 Lu Kaili and his wife, Sun Yan, in an undated image. (Minghui.org)
By Shuhan Zhao

In 2018, Lu Kaili was released from a 13-year prison sentence a changed man. An accident left him paralyzed from the waist down, while years of torture at the hands of prison guards had weakened his entire body.

All this because in 2005, the former construction engineer helped hijack a Chinese cable television broadcast to play a documentary exposing the communist regime’s history of murder and deceit.

Lu’s condition has meant that he’s had to rely on family in northeastern China’s Liaoning Province for many of his everyday activities.

About a month ago, Lu’s wife Sun Yan came home in the evening to find that Lu, 57, had vanished.

Sun asked around for an entire day before learning that police had raided their home while she was away and took her husband to a detention center. When Lu’s family went to the center, they saw a police car rushing out from the side, carrying Lu away.

This incident was reported on Minghui.org, a U.S.-based website tracking the persecution of Falun Gong by the Chinese Communist Party (CCP).

Like the seven other people involved in the 2005 television interception, Lu is an adherent of Falun Gong, a spiritual discipline consisting of slow meditative exercises and a set of moral teachings. In 1999, the group found itself in the crosshairs of an expansive elimination campaign launched by the CCP. Since then, an estimated 100 million adherents in China have become targets of detention, imprisonment, torture, and organ harvesting.

Lu’s family friend Yang Chunhua, also a Falun Gong adherent, was shocked to find out about Lu’s recent detention. Yang, who currently resides in New York, learned about the news from reading Minghui.org.

Yang’s sister was also jailed for taking part in the television interception. She died at home not long after being released from a seven-year prison sentence. Years before that, Yang also lost her mother to persecution.

Lu’s wife, Sun, a former kindergarten teacher, is also a Falun Gong adherent. She was also jailed multiple times for protesting and spreading information about the persecution.

From the start of the persecution to Lu’s release in 2018, the husband and wife have spent less than one month together, Yang said.

Sun was also sexually abused in prison, according to Yang. Sun once stayed at Yang’s apartment for a few days after she was released from prison to avoid stalking and harassment from police.

Yang recalled her landlord telling her, “Don’t take in Falun Gong people here.” Sun overheard them and then moved out without telling Yang.

According to multiple reports on Minghui.org, Lu went through severe torture at three prisons he was held at over the 13-year sentence.

Guards shocked him with high voltage electric batons until Lu’s body was covered in large burn scars. He was locked in a cell by himself and fed pig food for days on end. The muscles on his legs shriveled from being chained up long term. As part of the prison slave labor system, Lu worked on cornfields, quarries, and construction sites for long hours each day.

In one incident, Lu fell from a rooftop while working at a construction site in the early morning in August 2010. A day earlier, he had been shocked with electric batons for four hours straight.

After this, prison officials blocked reporters and Lu’s family from visiting him for 14 months. When his family was finally able to see him, another prisoner carried Lu out on his back. Lu could no longer stand up. He wasn’t able to talk to his family for more than ten minutes as he was so weak. Sun wept at the scene before he was taken back again.

Yang currently has no contact with either Lu or Sun. She worries deeply about the two of them and all other Falun Gong adherents still in China.

“I don’t want them to lose their life like my sister,” Yang said.

According to Minghui.org, Lu was transferred to the Dalian Yaojia detention center on June 25, where he is still being held.