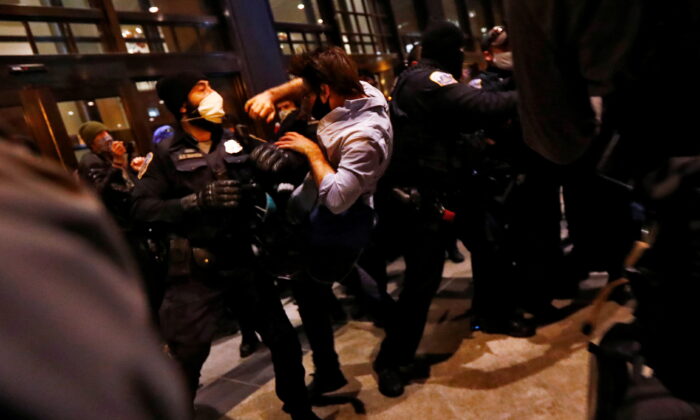 A man is thrown into the air by Washington Metropolitan police officers as Trump supporters and Antifa members clash near the Capital Hilton hotel in Washington on Nov. 14, 2020. (Jim Bourg/Reuters)
Viewpoints

Encountering Antifa in Front of the Marriott

I was in the Epoch Times office when one of the young women working across from me said, “I heard Antifa’s outside.” She gestured to the street below that was several floors down.

Antifa? It was certainly possible. Nearly every storefront in the area was boarded up with plywood. Something was feared or expected.

I was in D.C., having flown up from Nashville, my first flight since COVID, for meetings with my ET colleagues and possibly to report on the big MAGA rally that ran from Freedom Plaza up Pennsylvania Avenue to the Supreme Court.

The latter had been extremely peaceful as far as I could see and also multi-cultural, something that came as little surprise after the plethora of blacks and Latinos who had supported Trump during the election.

The only thing worth writing about was the usual blather about how many people showed up—25 or so, half of them confused tourists, according to CNN, two-thirds the population of India, according to Breitbart.

Crowd size is one of the great mythological subjects of our times. No one can possibly say for sure but everyone has an opinion. So I will state the obvious: It was a lot of people and, as noted above, everything was peaceful.

So back to Antifa. Either because I had nothing to write about or out of morbid curiosity, and though I had a sudden minor attack of butterflies, I decided I wanted to see this for myself.

The young woman kindly lent me her electronic security key to the building, one of those little guys you use to activate elevators, and I headed out of the office, down the building elevator and out onto the sidewalk.

No one was there. I glanced up and down the street. Still no one. False alarm, apparently.

I was about to go back inside, when I heard a noise, yelling and screaming. Then something like a firecracker going off. I looked further off and noticed a crowd half in the street and half on the sidewalk.

They were in front of the hotel where I was staying—the JW Marriott.

My curiosity now exploding, I hurried down there to see for myself.

The hotel has a rather large porte cochère and a number of people were gathered there, many in MAGA garb from the rally, some of those also staying in the hotel, staring in incredulity at what was in front of them.

Several Antifa-types were whizzing by on skateboards in front of the porte cochère driveway, seemingly about to enter it and storm the hotel, taunting and yelling obscenities at the crowd and calling them, almost needless to say, “racists,” although the onlookers were of decidedly mixed race. That, of course, didn’t matter.

Just then, one of the Antifa came closer, as if he were about to attack someone, daring us to respond.

For a split second, he was staring straight at me.

He appeared not like any sort of political activist I had seen but a complete psychopath, more like The Joker as portrayed by Joaquin Phoenix in the latest Batman movie, only this joker had long, bedraggled blonde hair and the deadest grey eyes you could imagine.

This was pure evil, beyond psychoanalysis or any ideology I could think of.

I had read many Antifa were actually community college teachers. Was that possible? What was this madman telling his students?

And then just as suddenly he moved past me deeper into the crowd, shouting more obscenities and racist accusations, threatening violence.

The onlookers were yelling for the police to come and arrest him, but they were nowhere to be found, although there were a handful of uniformed Marriott security people urging everyone to back up, including the Antifa.

He could have cared less, continuing his taunts, several of his cohorts whizzing behind him, cheering him on, when one of the MAGA people—a six-foot-four or so guy with the build of a power forward, stepped forward and literally hurled the smaller Antifa into the street, his skateboard flying.

I didn’t know whether to cheer or gasp, as the Antifa picked himself up, yelling back at us as if undeterred, but at the same time backing up. The crowd could easily have beaten him to a pulp in an instant and, in a certain way, might have done a service to humanity in the process.

But several wiser heads shouted “Let him go!” The crowd relented. The Antifa and his cronies retreated and were soon gone—for now.

I had had enough in my instruction in what Stanley Kubrick in “Clockwork Orange” called “a little of the old ultra-violence” and headed back to the office and, later, to a more peaceful Marriott, double locking myself in my room.

That night I heard drumming and chanting in the street and couldn’t sleep. Was that Antifa again? Thankfully, by 2 a.m. whoever it was had stopped. Even psychopaths have to get some rest.