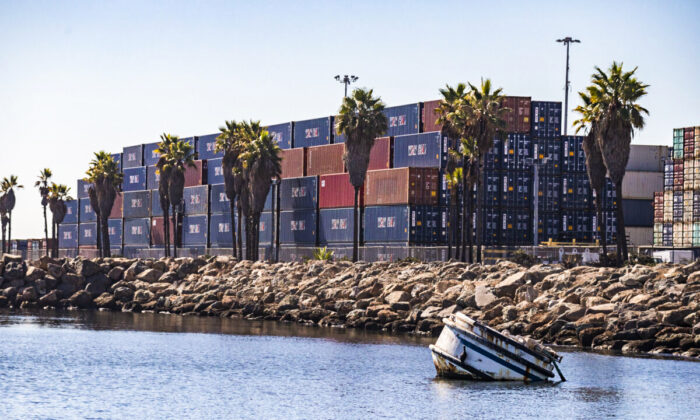 Empty Containers Stacking Up at Ports

As officials at the ports of Los Angeles and Long Beach report some progress clearing a backlog of shipping containers at the terminals, local police and residents of nearby neighborhoods say they are continuing to see trailers dumped on their streets.

Long Beach Police officers have cited unattached trailers loaded with containers parked along city streets over the past several months, according to department spokesman Brandon Fahey. These trailers are parked mostly along the west side of Long Beach, in and around industrial areas, Fahey said.

Valerie Contreras, former chair of the Wilmington Neighborhood Council—a small community adjacent to the Port of Long Beach—said last month her city has been overrun by shipping containers and trucks. Neighborhoods in Wilmington have become clogged with trailers carrying shipping containers lately as drivers attempt to find anywhere to drop off the trailers from the terminals, she said.

“It’s even to the point where they are backing up in a line all the way down in the middle of the street at all hours of the night and people cannot get in and out of their own driveway.”

Since implementing a plan to fine carriers that allow cargo to linger too long, the Port of Long Beach has so far seen nearly one-fourth of its containers cleared from its terminals. The ports of Los Angeles and Long Beach plan to charge $100 a day for each container left for more than nine days if the container will be moved by truck; rail carriers will be charged after six days.

Both ports plan to begin charging carriers no earlier than Nov. 15.

“Thanks to the collective and coordinated efforts of our ocean carriers, terminal operators, railroads, and motor carriers, we are pushing long-dwelling inbound containers out and creating capacity in the terminals,” said Noel Hacegaba, the deputy executive director of the Port of Long Beach.

The port is looking to remove empty containers, including dispatching what’s known as “sweeper ships.”

“As we continue the task of pushing long-dwelling inbound containers out of our terminals, we are also looking for every possible way to evacuate empties,” Hacegaba said.

Sal Mercogliano, an instructor of maritime history, security and industry policy at Campbell University in North Carolina and a former merchant mariner, agreed that the twin ports of Los Angeles and Long Beach should do more to clear the port areas of empty containers.

“They say they have no control over them and that’s completely untrue,” Mercogliano said in a video podcast on Nov. 5. “The water here is a national asset. Why is LA not mandating sweeper vessels? These are vessels that come in and remove the empty containers, which are a big problem in the yards right now. They can’t get the empties out. You can’t tell me they can’t do that, because they can.”

The Port of Long Beach has suspended its regulation that only allowed a maximum of two empty containers outside the terminals, following a tweet by a freight-forwarding operation called Flexport.

Flexport CEO Ryan Peterson caught the attention of the mayor of Long Beach, who has temporarily allowed containers to be stacked up to four-high at some storage areas around the port.

The busy ports are also reportedly bracing for thousands of additional empty containers en route from the East Coast and Gulf Coast ports, according to the trade magazine American Shipper.

The ports of Charleston, South Carolina; Savannah, Georgia; New Orleans, and Houston have shipped 2,000 empty containers to the Port of Los Angeles to be loaded onto cargo ships.

“We are trying to free up chassis, but we can’t because we are competing with these additional empties contracted by the ocean carriers,” Matt Schrap, Harbor Trucking Association CEO, told American Shipper. “This is not helpful for the supply chain.”

The Port of Los Angeles has seen a reduction of 10 percent of containers since last week, port spokesman Phillip Sanfield told The Epoch Times in an email.

“This is a reflection of all nodes of the supply chain from the shipping lines to the marine terminals, to the truckers, and cargo owners working in sync,” Sanfield said.

Officials at the Port of Los Angeles expect about 70,000 empty containers to be stored at the terminals next week. That number will increase to 88,000 the next week and drop again to 61,000 the following week.

“It’s actually gotten worse,” Nerijus Poskus, Flexport’s vice president of ocean freight, told the industry magazine Supply Chain Dive in February. “Some carriers are currently shipping over 75 [percent] of their containers empty back to Asia to make sure they get there faster.”

Container problems and exporting to China and Hong Kong has changed recently, especially for businesses involved in recycling.

China announced it would no longer accept paper or cardboard loads as of the end of December 2020, Barker told The Epoch Times in an email.

“So it has gone down to virtually nothing compared to what it had been when China handled the majority of the world’s recyclables,” Barker said.

“I know China has a serious shortage of empty containers and it has created major logistics problems in its shipping of all the export that they provide,” he said. “We shipped 12 to 15 truckloads/containerloads to Long Beach every day for many years. It became increasingly hard to get truckers/trucking companies to go into California because of stricter regulations on the trucks.”

Barker continued to ship recycling materials to wood mills in the United States, although fuel prices and other factors made the trips unfeasible, he said.

Activists with the Basel Action Network (BAN) in Seattle started a campaign last year to stop plastic waste exports from reaching China, Mexico, Malaysia, India, and Indonesia. So far, Moller-Maersk, the world’s largest shipping firm, Hapag-Lloyd, CMA, and others have announced they would no longer ship waste shipments to China and Hong Kong.

The U.S. produced almost 40 million tons of plastic waste in 2018, of which only 2.2 percent was recycled, according to the independent Swiss research group Global Initiative Against Transnational Crime.

The group said it projects that U.S. domestic capacity could be reduced to zero this year.