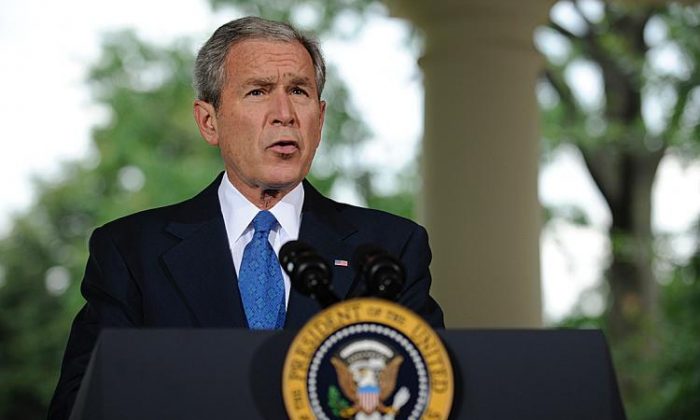 Then-President George W. Bush delivers a speech from the porch of the Oval Office at the White House in Washington on July 31, 2008. (Shawn Thew/Getty Images)
By Naveen Athrappully

A portion of the pres­id­en­tial emer­gency action docu­ments, or PEAD—wide-ranging powers granted to the executive branch during times of emergency—have been disclosed using the Freedom of Information Act (FOIA), shedding light on some of the powers that can be exercised by American presidents.

PEADs, first drafted during the Cold War era under Pres­id­ent Dwight Eisen­hower, underwent a review in 2004 during the George W. Bush admin­is­tra­tion. Although there had been previous amendments in the original documents, the 9/11 attacks permanently changed how warfare was waged by the U.S. government, resulting in the Bush-era review.

In response to FOIA requests submitted by the Brennan Center for Justice, more than 500 pages of the review were handed over to the public policy institute. Another 6,000 pages remain classified.

Based on these documents, the president can activate powers that appear to lack over­sight from Congress or the courts, including shutting down or seizing control of “any facil­ity or station for wire commu­nic­a­tion,” detaining individuals, and restricting travel during national security emergencies.

Wire communications refer to telephone calls and telegrams, which were the primary methods of official communication when the PEADs were first written. However, the terminology in modern times could be used to interpret vast swaths of elec­tronic commu­nic­a­tion, including the internet, and Brennan Center analysts said this could be used to implement an “internet kill switch.”

Bush administration officials viewed the statute as “very broad,” and extended its reach to “broader than common carri­ers in FCC [Federal Commu­nic­a­tions Commis­sion] juris[diction],” according the documents.

The Brennan Center could only make inferences based on corrections and library records because of the classified nature of the documents.

At least one document related to the suspen­sion of habeas corpus was indicated in the records. The writ of habeas corpus is a fundamental constitutional right granted to citizens that protects them from unlawful and indefinite imprisonment.

In 2008, the Supreme Court recognized Guantanamo Bay pris­on­ers’ consti­tu­tional right to chal­lenge their deten­tion in court in a land­mark decision (Boumediene v. Bush). However, according to the Brennan Center, there weren’t any PEADs withdrawn or canceled based on the decision.

Instead, 8 PEADs were added, suggesting that, during times of emergency, a president can order the detention of individuals, waiving basic rights granted under the Constitution.

Similarly, the president can authorize restrictions on the use of U.S. passports in order to curtail travel. The executive branch has made use of existing statutes to ban travel to countries like Lebanon, Iraq, Libya, and North Korea, but the Brennan Center notes that a broader absolute restriction on travel would bypass current limitations.

The Brennan Center adds that the lack of disclosure prevents another branch of government from overseeing emergency protocols, and in the process, sacri­fices Amer­ic­ans’ consti­tu­tional rights.