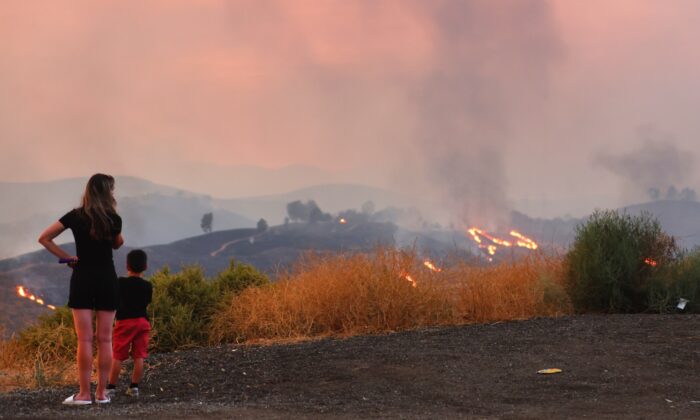 A mother stands with her 5-year-old son, whose school was evacuated during the Route Fire near Castaic, Calif., on Aug. 31, 2022. (Mario Tama/Getty Images)
Southern California

An emergency alert that appeared during TV programming on Wednesday telling Los Angeles residents to evacuate was sent “in error” by the county, according to officials.

Shortly after the vague emergency broadcast system alert confused many Californians, the Ventura County Sheriff’s Office confirmed that the message was sent by mistake.

“The evacuation notice that was received by some Ventura County Residents on television was sent in error by the County of Los Angeles,” the sheriff’s office said in a statement. “There is no threat to Ventura County at this time and no need for residents to evacuate.

Besides Ventura County, other regions that were mentioned in the alert included the Eastern North Pacific Ocean and Port Conception to Guadalupe Islands.

The evacuation notice that was received by some Ventura County Residents on television was sent in error by the County of Los Angeles. There is no threat to Ventura County at this time and no need for residents to evacuate.#VCSheriff #VCOES

Up until now, it remains unclear how many people received the false notice, which interrupted multiple TV shows such as an ABC News broadcast and Dr. Strangelove.

The Los Angeles County’s Office of Emergency Management told Fox News that the message was “properly formatted” and should not have “triggered an EAS [Emergency Alert System] evacuation.”

The office, which is responsible for assuring the region’s readiness to respond to and recover from hazards, noted that it didn’t have an immediate answer for the “root causes” of the notification sent in error.

The erroneous alert came as wildfires erupted in California on Wednesday, prompting a mandatory evacuation order for an apartment community in Castaic, as well as the closure of Old Ridge Route from Templin Highway to North Lake Hills Elementary School.

According to the Los Angeles Fire Department’s latest update, the Castaic “Route Fire” is currently at 5,208 acres with 12 percent containment.

In a statement to Fox News, the Los Angeles emergency management office said the National Weather Service (NWS) transmitted “a Non-Weather Emergency Message (NWEM) via National Oceanic and Atmospheric Administrator (NOAA) Weather Radio on behalf of the County of Los Angeles” per the request of local fire officials to support evacuation notifications related to the Castaic area brush fire.

The agency noted that the emergency broadcast system alert was “properly formatted for dissemination” via weather radio in the target area through “close coordination” between the county and NWS and “worked as advertised,” but it should not have triggered an EAS evacuation.