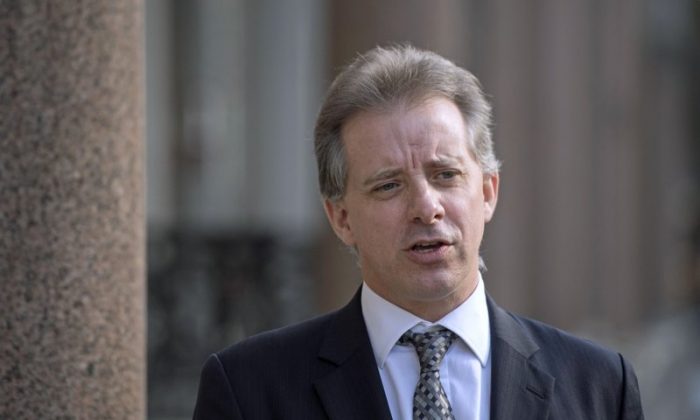 WASHINTON—Former British spy Christopher Steele, author of the infamous anti-Trump dossier bearing his name, was introduced by a key State Department aide to top executives of a firm founded by President Bill Clinton’s former White House Chief of Staff Mack McLarty, according to documents made public on June 10 by Judicial Watch.

In multiple email threads included in the documents, Jonathan Winer, then the U.S. Department of State’s special coordinator for Libya, acts repeatedly on behalf of Steele, arranging meetings for him with other current and former top U.S. officials, as well as influential consultants and strategists like those at the McLarty firm.

Steele worked for the Fusion GPS opposition research firm and was paid for the “salacious and unverified” dossier indirectly by the 2016 presidential campaign of former Secretary of State Hillary Clinton and the Democratic National Committee (DNC), which she then controlled through a cut-out, the Perkins Coie law firm that specializes in representing Democratic Party committees, candidates, and officials.

“These documents show that Fusion GPS and Clinton spy Christopher Steele had a close relationship with the Obama State Department,” said Judicial Watch President Tom Fitton. “The State Department under John Kerry is emerging as another center of the Spygate conspiracy against President [Donald] Trump.”

Winer worked for former Massachusetts Sen. John Kerry, Clinton’s successor as secretary of state. One of the email exchanges released by Judicial Watch on June 10 suggests that Steele, under Kerry and through Winer, may have had Clinton connections independent of Fusion GPS.

In a Nov. 20, 2014, message using the U.S. Department of State email system, for example, Winer forwarded to Steele his exchange earlier that day with Nelson Cunningham, president of McLarty Associates, regarding a meeting with Steele.

The message was included in 43 pages of documents obtained by the nonprofit government watchdog in litigation that resulted from the State Department’s failure to respond to three Freedom of Information Act (FOIA) requests.

McLarty Associates, an international political and diplomatic strategic consulting firm, was co-founded in 1998 by Cunningham and the former White House chief of staff.

McLarty was a childhood friend in Hope, Arkansas, of Bill Clinton and served in senior positions throughout Clinton’s two terms as president. He remains a close associate of Bill and Hillary Clinton.

In addition to co-founding the McLarty firm, Cunningham is a long-time Kerry associate, having worked in his 1984 Senate campaign and his 2004 presidential race.

McLarty Associates claims 300 clients, including 20 Fortune 200 corporations, and works in 112 countries around the world, including Russia.

In the exchange, Cunningham told Winer that he was “happy to meet Chris, but tomorrow does not work for me or Rick Burt, unfortunately. Can you please connect us?”

Winer is also found in a Nov. 11, 2014, email exchange setting up a meeting on behalf of Steele with Jones to discuss “three Orbis reports.”

The “Orbis reports” and “O Reports” mentioned are references to documents produced by Steele’s London-based Orbis Business Intelligence firm, according to Judicial Watch.

In another Nov. 20, 2014, email thread, Winer arranges a meeting with Steele, who is in the State Department official’s office, with a senior executive of the APCO International public relations firm.

Ariuna Namsrai, APCO’s managing director for Russia, CIS, and Central Asia, tells Winer that she has previously met Steele but is glad to do so again.

In an ironic twist, included in the documents released by Judicial Watch was a Jan. 12, 2017, email to Winer from movie producer Eric Hamberg, who mentions an article from UK news source The Independent.

“Dear Jonathan, I have been meaning to write to you, and just came across this article which mentions your name… Let’s do a movie about this!

“I was wondering if you have decided what your next position will be after leaving government. I’d like to keep in touch … I’m currently working on a mini-series about Watergate for ABC with John Dean.”

Dean, who was convicted of obstruction of justice in the Watergate scandal, testified on June 10 before the House Judiciary Committee.