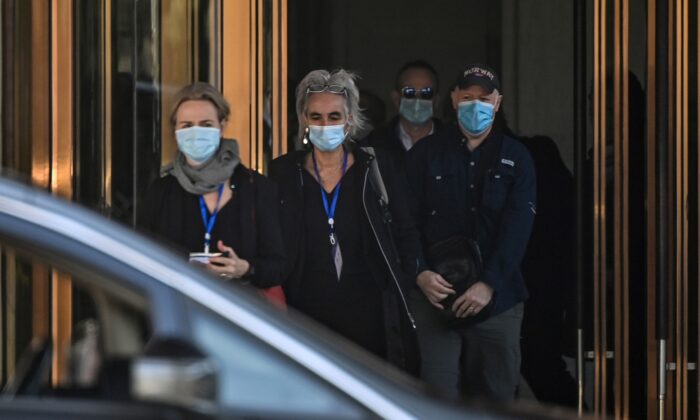 (L-R) Thea Fischer, Marion Koopmans, Peter Daszak and other members of the World Health Organization (WHO) team investigating the origins of the Covid-19 pandemic, leave the Hilton Wuhan Optics Valley Hotel in Wuhan, on Jan. 29, 2021. (HECTOR RETAMAL/AFP via Getty Images)
US News

The two most significant articles promoting the “natural origins” theory for the COVID-19 outbreak originated from scientists who were part of a response team of “experts” brought in by the National Academies of Sciences, Engineering, Medicine (NASEM), in response to a request from a White House official.

These influential articles were used extensively by media organizations to push the natural origins theory, while simultaneously deriding alternative theories—including that of a possible lab leak—as conspiracy theories.

The articles appear to have been part of a coordinated effort originating from a Feb. 1, 2020, teleconference organized by Dr. Anthony Fauci, director of the National Institute of Allergy and Infectious Diseases (NIAID), and Dr. Jeremy Farrar, director of the British Wellcome Trust, which took place after a group of health officials scrambled in late January 2020 to respond to public reporting of a potential connection between COVID-19 and the Wuhan Institute of Virology in China.

Following the officials’ conversations, public discussion of the source possibly being a lab leak was actively suppressed by social media platforms, health officials, and the World Health Organization (WHO).

The first article, designed more as an open letter to the public, was published on Feb. 19, 2020, and signed by a number of scientists. An early-morning email on Feb. 6, 2020, (p. 251) obtained through a Freedom of Information Act request by U.S. Right to Know, revealed that EcoHealth President Peter Daszak drafted the letter calling for “solidarity with all scientists and health professionals in China.”

Daszak’s organization in the past had received $3.7 million in funding from Fauci’s NIAID, at least $600,000 of which was sent to the Wuhan Institute.

Daszak’s letter notes that “transparent sharing of data on this outbreak is now being threatened by rumours and misinformation around its origins.”

“We stand together to strongly condemn conspiracy theories suggesting that COVID-19 does not have a natural origin,” states the letter signed by 27 scientists.

The second article, “The Proximal Origin of SARS-CoV-2,” published on Mar. 17, 2020, in the journal Nature, targeted the scientific community. This article was led by “corresponding author”  Kristian Andersen, who recently deleted his entire Twitter profile, along with four other researchers.

Notably, of the five scientists credited with writing the article, four had directly participated in the Fauci–Farrar teleconference—which was described in an Feb. 1, 2020, email from Farrar (p. 3,197) as a “discussion … shared in total confidence.”

The one author not present on the Feb. 1, 2020 Teleconference has since recanted his position.

NASEM: Additional Data ‘Needed to Determine the Origin and Evolution of the Virus’

Immediately prior to Daszak circulating the draft of the Lancet letter, there was a meeting (p. 116) on Feb. 3, 2020, organized by the National Academies of Sciences, Engineering, Medicine (NASEM), that reportedly included “officials from the FBI, the Office of the Director of National Intelligence, along with the NIH and the Department of Health and Human Services.”

The hastily assembled meeting came at the same-day request of White House Office of Science and Technology Policy (OSTP) Director Kelvin Droegemeier, who asked the NASEM to “help determine the origins of 2019-nCoV.”

The NASEM meeting came two days after the Fauci–Farrar teleconference. Internal emails of Fauci released through open records requests reveal the teleconference was prompted by the publication of an article in Science that referenced a Nov. 9, 2015, article in Nature about gain-of-function experiments that were being conducted at the Wuhan lab using “chimeric viruses” in mice and funded by Fauci’s organization.

The NASEM meeting included a 10-minute presentation (p. 116) from Fauci during the one-hour gathering, and also included both Daszak and Andersen.

The internal emails suggest that there was significant internal debate following the formal meeting—from both officials at NASEM and the experts called in by the organization for advice—on the official response to Droegemeier’s request.

Andersen responded to the discussion by Daszak and the rest of the expert group by email (p. 125) on Feb. 4, 2020, writing: “I do wonder if we need to be more firm on the question of engineering. The main crackpot theories going around at the moment relate to this virus being somehow engineered with intent and that is demonstrably not the case. Engineering can mean many things and could be done for either basic research or nefarious reasons, but the data conclusively show that neither was done.”

However, just days prior, immediately preceding the Feb. 1, 2020, Fauci–Farrar teleconference, Andersen had sent Fauci an email that noted that “one has to look really closely at all the sequences to see that some of the features (potentially) look engineered.”

The NASEM response was also shaped by Trevor Bedford, a computational biologist who suggested: “1. I wouldn’t mention binding sites here. If you start weighing the evidence there’s a lot to consider for both scenarios. 2. I would say ‘no evidence of genetic engineering’ full stop.”

Events were moving rapidly. On Feb. 4, 2020, Andrew Pope of NASEM wrote to the participants, noting: “Plans have changed in terms of our product. Instead of a ‘Based on Science’ web posting, we are now developing a letter that will be signed by the 3 Presidents of our 3 Academies.”

After much deliberation, a Feb. 6, 2020, response from NASEM’s Marcia McNutt, John Anderson, and Victor Dzau was sent to the White House’s Droegemeier, which noted that the NASEM had “consulted leading experts … that could help elucidate the origin and evolution of 2019-nCoV.”

Contained within the letter was the official opinion from the NASEM’s panel of experts, who “informed us that additional genomic sequence data from geographically- and temporally-diverse viral samples are needed to determine the origin and evolution of the virus.”

Drafts of Daszak and Andersen Letters are Circulated

One day prior to the official NASEM response, however, Daszak was already circulating his letter dismissing laboratory origins as a conspiracy theory. And according to Andersen’s co-author Robert Garry, a draft of Andersen’s March 17, 2020, “The Proximal Origin of SARS-CoV-2” article for Nature was also circulating by the time of NASEM’s response.

Ralph Baric, a virologist who collaborated with Wuhan Institute of Virology director Shi Zheng-Li on gain-of-function experiments, was included in early drafts of Daszak’s letter. In a Feb. 6, 2020, email Daszak wrote that there was “no need for you to sign the ‘Statement’ Ralph!!” to which Baric responded: “I also think this is a good decision. Otherwise it looks self-serving and we lose impact. Ralph”

Notably, Baric was the corresponding author of the Nov. 9, 2015, Nature article that sparked the initial scramble leading to the Feb. 1, 2020, conference call initiated by Fauci and Farrar.

During the circulation of his drafts, Daszak told people (p. 273): “I’ve come up with an initial list below. Please suggest names of your colleagues that you think might also be willing to support this.”

Daszak closed (p. 274) by telling those privy to the early draft, “Please note that this statement will not have EcoHealth Alliance logo on it and will not be identifiable as coming from any one organization or person, the idea is to have this as a community supporting our colleagues.”

Interestingly, a day earlier, when Dazsak first began the process of circulating his draft, he stated that he “should not sign this statement, so it has some distance from us and therefore doesn’t work in a counterproductive way.” Daszak continued, “We’ll then put it out in a way that doesn’t link it back to our collaboration so we maximize an independent voice.”

It is not clear why Daszak changed his mind, ultimately becoming a signatory to the letter.

The Feb. 19 Lancet article was signed by 27 scientists from around the world. Although only two signatories, Farrar and Christian Drosten, were actually present on the Feb. 1 teleconference, at least five were directly affiliated with EcoHealth Alliance. Additionally, two were partners of EcoHealth. These affiliations weren’t declared in the Lancet letter. Instead, the authors specifically declared that they had no competing interests.

Additionally, five of the signatories worked with or for the Wellcome Trust headed by Jeremy Farrar.

Some signatories unaffiliated with either the Feb. 1 teleconference or EcoHealth have recently changed their minds on the origins of the virus. Stanley Perlman now says that the lab leak theory is “back on the table.” And signatory Charles Calisher claims that it was “over the top” to call the lab leak a conspiracy theory.

Another signatory, Peter Palese, is now demanding a proper investigation. Most notably, University of Chicago professor Bernard Roizman has stated that the virus originated from the lab due to “sloppiness,“ claiming that Wuhan lab personnel “can’t admit they did something so stupid.”