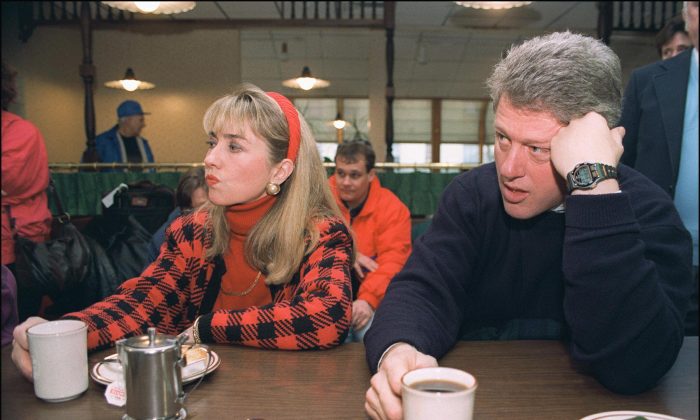 Politico said that they obtained the email “when Trump campaign spokeswoman Hope Hicks, who Caputo copied on his request to the RNC, accidentally responded instead to Marc Caputo, a Politico reporter who is not related to the Republican consultant.”

The email asked the RNC researcher to “work up information on HRC/Whitewater as soon as possible. This is for immediate use and for the afternoon talking points process.”

Whitewater refers to a scandal involving the Clintons’ real estate investment during the late 1970s through a company they formed called the Whitewater Development Corporation.

The scandal arose after Bill Clinton was elected President in 1992 and included allegations that Clinton, as governor of Arkansas, used his influence to arrange a $300,000 loan to the Clintons’ partner in the deal.

Several of the Clintons’ associates were convicted, but neither Bill nor Hillary were ever brought up on charges.

Police and Protesters Clash Outside Trump Rally in New Mexico

This is the latest Clinton scandal that Trump’s campaign has alluded to, promising that this battle for the White House will be a slew of negative campaigning straight out of a 1999 playbook.

Trump has recently brought up Bill Clinton’s rape allegations dating back to 1978, the suicide of former White House aide Vincent Foster from 1993, and invoking the names Paula Jones and Monica Lewinsky.

That, on top of more recent scandals following Hillary around—Benghazi, her emails, the FBI probe into her server—gives the presumptive Republican nominee enough fodder to last all the way to the general election in November.