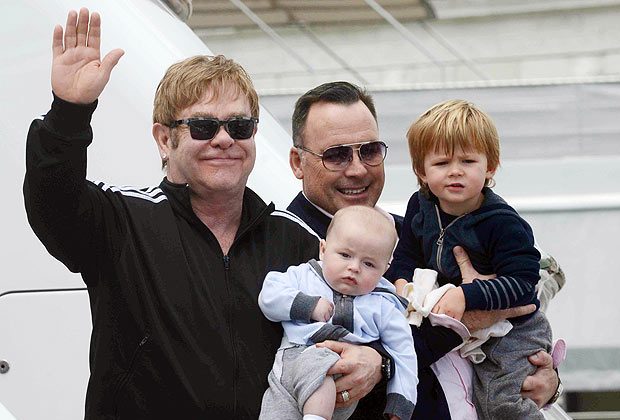 Elton John with his husband David Furnish with their children
News

GAY ON GAY CONTENTIONS….. LEGENDARY SINGER-SONGWRITER ELTON JOHN IS NONE TOO PLEASED with the iconic fashion house founders Dolce and Gabbana. Domenico Dolce and Stefano Gabbana were recently interviewed by the Italian magazine Panorama and quoted as saying:

“The only family is the traditional one. No chemical offsprings and rented uterus: life has a natural flow; there are things that should not be changed.”

“You are born to a mother and a father.”

These sentiments were found to be highly offensive by Sir Elton John who announced on that he would begin a boycott against the esteemed fashion house.

On Sunday Elton John decided to take to social media via Instagram to express his outrage writing:

“How dare you refer to my beautiful children as “synthetic”. And shame on you for wagging your judgmental little fingers at IVF — a miracle that has allowed legions of loving people, both straight and gay, to fulfill their dream of having children. Your archaic thinking is out of step with the times, just like your fashions. I shall never wear Dolce and Gabbana ever again.”

He ended his diatribe with the hashtag:  #BoycottDolceGabbana

BELOW: DOMENICO DOLCE and STEFANO GABBANA –

Since then gay recording artist Ricky Martin, who is also the father  of two children born via a surrogate mother, also took to social media and tweeted: “Ur voices R 2powerfull 2B spreading so much h8.”

The creator of the popular hit show “Glee” also chimed in on Twitter writing calling the view of the two designers “Horrifying.”

In addition Al Roker, Martina Navratilova and Courtney Love also expressed their disappointment with the Dolce and Gabbana remark.   The duo later released a statement on Sunday addressing the growing onslaught of criticism aimed at their remark.

“It was never our intention to judge other people’s choices,” Stefano Gabbana said  “We do believe in freedom and love.”

The two designers who are also gay noted that they were just expressing their view of a family unit, and noting that it is based on being raised in a traditional Sicilian household, which Dolce says is “made up of a mother, a father and children.”

“I am very well aware of the fact that there are other types of families and they are as legitimate as the one I’ve known,” said Dolce.

Back in 2006 Dolce and Gabbana reportedly spoke out against gay marriage even though they are both gay and were once a couple.   When asked back in 2013 by The Telegraph if they would ever consider marriage they reportedly retorted:  “Never! We don’t believe in gay marriage.”