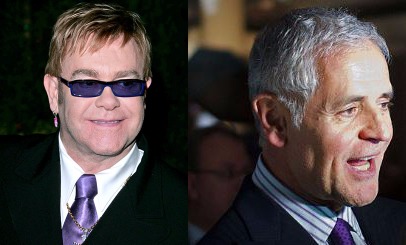 THE DOLCE AND GABBANA / ELTON JOHN FEUD is heating up.   It seems that Elton John’s boycott against the fashion house icons Dolce and Gabbana has sparked outrage on the the Italian front.  An Italian politician Senator Robert Formigoni has spoken out in defense of the gay fashion moguls.

Formigoni branded Sir Elton John a “Taliban” for his attack against Domenico Dolce and Stefano Gabbana, after the duo described IVF children as “synthetic.”

John who has two children (Zachary four, and Elijah two) with his husband David Furnish  was outraged by Dolce and Gabbana’s statement, but the design team is being defended by conservative members of Italy’s New Centre Right which includes Senator Robert Formigoni.

Formigoni compared Elton John to the Islamic fanatics who murdered staff members at the Charlie Hebdo political magazine.   Formigoni asserted, “I’m with Dolce and Gabbana and I applaud their courageous statement – this is freedom of expression… the campaign launched against the two stylists by Elton John is shameful and intolerable….Elton John is a Taliban, he is using against Dolce and Gabbana the same methods used by the Taliban against Charlie Hebdo.”

Formigoni’s colleague Carlo Giovanardi  fell in line noting, ” The gay Taliban are trying to boycott Dolce and Gabbana just because they dared to say that every child has a right to a mother and a father.”

MP Elvira Savino said, “Elton John is an intolerant person who wants to block anyone who thinks differently to him.”

Steffano Gabbano admitted that he felt the boycott could cost the fashion house considerable sales with Elton John fans.

Stay tuned for round three.