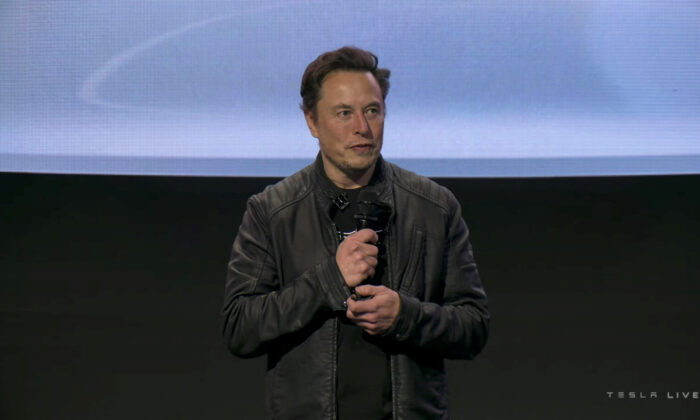 Tesla Chief Executive Elon Musk speaks during the live-streamed unveiling of the Tesla Semi electric truck in Nev. on Dec. 1, 2022. (Tesla/Handout via Reuters)
By Jack Phillips

Stone, who worked on a number of GOP presidential campaigns since the 1970s, cheered Musk granting him access to the social media platform on Wednesday evening. He was banned by Twitter’s former management in 2017 for alleged “targeted abuse” against several CNN staff members, according to the company in a series of tweets at the time.

“I learned roughly an hour ago that my genuine Twitter page has been reinstated,” Stone wrote. “My thanks go to Elon Musk, who is a man of his word. And who I now believe, based on this act and a number of other acts, is committed to free speech. So, I’m grateful to be back on Twitter.”

After the restoration of his account, Stone added that “liberal heads are exploding everywhere across the country today,” adding, “I hope others who have been unfairly banned will be restored as well. But I’m grateful today to be back on Twitter.”

Stone added that he is “a different person today” and asked for forgiveness for Twitter posts that he previously made. “This was before my faith walk,” he wrote.

“I’m certain when I go back and look there are things that I said that I will regret,” he continued, “but as President Richard Nixon said, ‘Never look backwards, always look forward,’ and that’s what I intend to do.”

In 2019, Stone was convicted on felony charges relating to special counsel Robert Mueller’s investigation. A year later, he was pardoned (pdf) by Trump during his final month in office and Stone thanked the former president for “completely erasing the criminal conviction to which I was subjected in a Soviet-style show trial on politically-motivated charges.”

He was pardoned by Trump in December 2020.

And Loomer, a former GOP congressional candidate and political commentator, wrote on her formerly banned Twitter account that she had returned.

“After getting BANNED on Twitter in 2018, and being digitally exterminated on nearly every other social media site, payment processor, Uber, Lyft, Uber Eats, & my own bank, I’M BACK!!!!!” she wrote on the platform.

Weeks before that, Musk announced he would allow former President Trump back on Twitter after conducting a poll via his account that showed a majority of users wanted him to return. But Trump, who has not posted anything on his account since it was banned in January 2021, has indicated that he will stick with his own platform Truth Social.

Last month, Musk announced there would be amnesty for some accounts, although he publicly ruled out restoring the account of commentator Alex Jones due to his comments about the Sandy Hook shooting years ago. Musk also suspended rapper Kanye “Ye” West’s account after he posted an image of a swastika combined with a Star of David via his Twitter account.

“Don’t blame Musk at the end of the day because he didn’t bring me back,” Jones, the founder of InfoWars, told viewers in a Rumble video, which came weeks after he was ordered to pay more than $1 billion to Sandy Hook families in a defamation case. “I’m the most controversial figure in the world because I’m the most threatening to the new world order. So don’t expect him to bring me back on day one.”

Late on Friday, Musk revealed what he said was the inside story of Twitter’s decision in 2020 to limit the spread of a New York Post story about Hunter Biden’s laptop. The Twitter CEO endorsed a thread that was posted by journalist Matt Taibbi, who included alleged screenshots of internal Twitter messages.

Twitter initially blocked links to the story on its platform and falsely suggested it might have contained material obtained through computer hacking. That decision was reversed after it was criticized by then-Twitter CEO Jack Dorsey. Facebook also took actions to limit the story’s spread.

Musk this week confirmed that he “exited” Twitter’s general counsel, James Baker, after it was revealed that he vetted some of the information that was provided to Taibbi. It’s not clear why Baker, a former top FBI official, had such capabilities after Musk’s takeover. Baker also suggested in emails to other Twitter staff in the fall of 2020 that the NY Post’s Hunter Biden story was produced via hacked materials, without providing evidence.

“I support the conclusion that we need more facts to assess whether the materials were hacked,” Baker wrote in an email chain. “At this stage, however, it’s reasonable for us to assume that they may have been and that caution is warranted.”