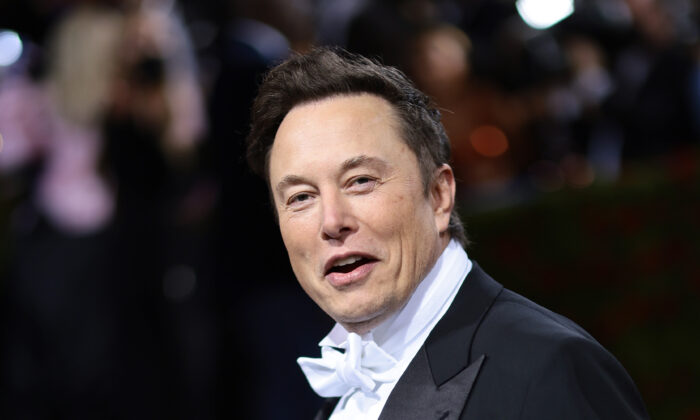 Elon Musk attends the 2022 Met Gala Celebrating "In America: An Anthology of Fashion" at the Metropolitan Museum of Art in New York on May 2, 2022. (Dimitrios Kambouris/Getty Images for The Met Museum/Vogue)
Media & Big Tech

Elon Musk is accusing Twitter of “resisting and thwarting” his ability to obtain information about bot accounts on the social media website, saying that it’s a “breach” of the terms of their April deal.

Musk, the world’s richest person, sent a letter to the San Francisco-based firm on June 6.

“Mr. Musk reserves all rights resulting therefrom, including his right not to consummate the transaction and his right to terminate the merger agreement,” the letter reads.

Several weeks ago, the Tesla CEO accused Twitter of allowing a significant number of automated or “bot” accounts on the platform and demanded that the company release that data to him.

In late April, Twitter’s board and Musk jointly announced that he would purchase the social media company for $44 billion and take it private. The deal could take months to finalize, and Musk has publicly stated that it’s not entirely confirmed that he’ll actually buy Twitter.

After the letter was released on the U.S. Securities and Exchange Commission’s website, shares of Twitter dropped 1.5 percent.

“As Twitter’s prospective owner, Mr. Musk is clearly entitled to the requested data to enable him to prepare for transitioning Twitter’s business to his ownership and to facilitate his transaction financing,” the letter reads. “To do both, he must have a complete and accurate understanding of the very core of Twitter’s business model—its active user base.

“Musk is not required to explain his rationale for requesting the data, nor submit to the new conditions the company has attempted to impose on his contractual right to the requested data. At this point, Mr. Musk believes Twitter is transparently refusing to comply with its obligations under the merger agreement, which is causing further suspicion that the company is withholding the requested data due to concern for what Mr. Musk’s own analysis of that data will uncover.”

Last month, Musk said his team wanted to perform a random sampling to calculate the number of fake accounts. However, Twitter’s CEO, Parag Agrawal, later said nonpublic information would be required to obtain an accurate count.

But with the June 6 letter, some analysts speculated that Musk is trying to exit the deal with Twitter.

“Speaks to our thesis over past few weeks that spam/bot issue was going to be the ‘material breach’ cited by Musk to try to get out of TWTR deal,” Wedbush analyst Dan Ives wrote on Twitter. “$1 billion breakup fee; Twitter Board will fight this clearly. Help remove a major overhang on Tesla; Twitter stock be under pressure.”