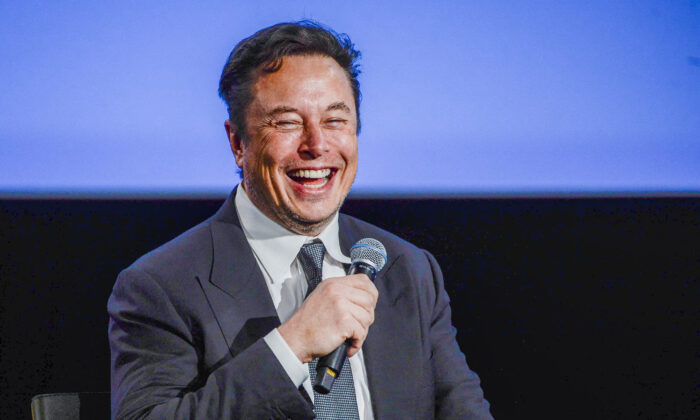 Tech entrepreneur Elon Musk told reporters in Norway on Aug. 29 that, while sustainable energy sources should be developed, the world must continue to extract oil and gas in order to sustain civilization.

The Tesla CEO made the remarks to reporters ahead of the Offshore Northern Shore (ONS) conference in Stavanger, Norway, where he was scheduled to speak.

After Musk arrived at the conference venue, he told reporters he had come “in appreciation for the support of the Norwegian people for electric vehicles” and thanked them for their “tremendous support.”

He added that, at the conference, he was planning to provide “ideas for a transition to a sustainable energy world,” including the possibility of expanding wind power generation in the North Sea, the body of water between the UK and Norway.

“Places where it’s very windy, there might be potential for tremendous amount of wind power and when combined with stationary battery packs, this could be a very strong sustainable energy source in the winter,” Musk said.

‘We Need Oil and Gas’

He was asked if he believes oil and gas should continue to be used.

“Realistically, we do need to use oil and gas in the short term because otherwise, civilization will crumble,” Musk said. “In order for civilization to continue to function, we do need oil and gas,” adding that “any reasonable person would conclude that.”

Not only should oil and gas should continue to be used to keep civilization running, Musk said that further exploration “is warranted at this time.”

Use of fossil fuels should continue at the same time as ongoing efforts around “accelerating the advance of sustainable energy,” he added.

Musk’s remarks about the continued need for fossil fuels come as the oil and gas industry looks to the future with caution.

U.S. oil and gas producers face a shrinking supply of capital, a hostile regulatory environment, and shortages of materials and labor that altogether present significant hurdles against new drilling.

“Our industry is being starved for capital,” Anthony Gallegos, CEO of Independence Contract Drilling, told The Epoch Times in an earlier interview, noting that banks are increasingly unwilling to provide revolving lines of credit or asset-based lending facilities (ABLFs) to the oil and gas industry.

“There’s probably a third as many banks today that are willing to provide revolvers and ABLFs to [oil and gas] service companies compared to what there would have been six years ago,” he said.

Banks and investors have been cutting back financing for new fossil fuel projects, driven by both economic and political factors.

In line with the environmental, social, and governance (ESG) principles movement, more than 100 banks that represent a total of 38 percent of global banking assets have signed the commitment statement of the U.N. Net-Zero Banking Alliance. In it, they pledge to transition their lending portfolios to reduce greenhouse-gas emissions and reach net-zero emissions by 2050 or sooner. A number of U.S. banks have signed on to the initiative.

Aside from the ESG movement, the oil and gas industry is also coming out of a period of over-investment in new fracking projects a decade ago, with many investors now looking to take a more cautious approach.

“I don’t think you’re ever going to see capital flow into this industry the way it did in 2012 through 2014,” Gallegos said.

“Investors have made it clear: ‘We’re not here to fund your growth just for growth’s sake; if we’re going to give you money, you’re going to have to demonstrate a pathway toward generating returns where we’re seeing something back as investors,’” he said.

In addition to more investor caution, there’s also a hostile regulatory environment, with The Heritage Foundation recently describing the Biden administration’s energy policies as “radical” and “based on an anti-fossil-fuel fiction that is causing unnecessary hardship and costing Americans dearly.”

Gasoline prices surged to record highs under President Joe Biden while U.S. crude oil production during his first year in office was 9 percent below 2019 levels and even below 2020 levels when the pandemic shock was at its worst.