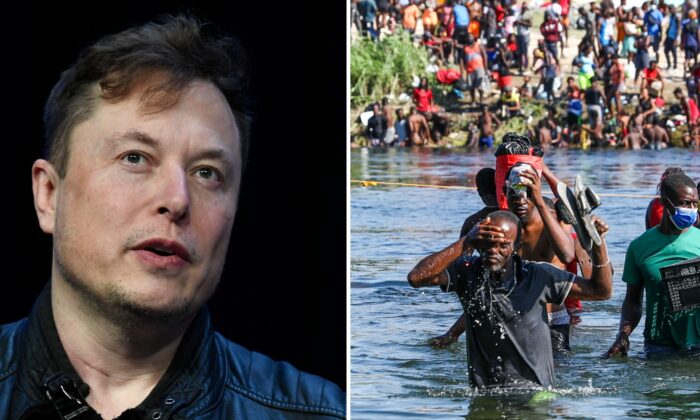 Tesla and SpaceX CEO Elon Musk (L) speaks at the SATELLITE Conference and Exhibition in Washington on March 9, 2020. Illegal immigrants (R) take supplies back and forth between Acuña, Mexico, and the United States (far side) across the Rio Grande, the international boundary with Mexico, in Acuña, Mexico, on Sept. 20, 2021. (Susan Walsh/AP Photo; Charlotte Cuthbertson/The Epoch Times)
Immigration & Border Security

Tesla CEO Elon Musk is reacting to the recording-breaking number of illegal immigrants walking through the southern border.

The world’s richest person was replying to reporting from Fox News’s Bill Melugin, who posted on Twitter drone footage of a group of hundreds of illegal immigrants crossing the southern border at Eagle Pass, Texas, into the United States.

In his post, Melugin cited Customs and Border Protection (CBP) statistics showing border agents to have encountered 400,000 illegal immigrants so far in the Del Rio sector in fiscal year 2022 (since October 2021), a number that’s already more than double the total number of encounters in fiscal year 2021. This number doesn’t include “gotaways”—illegal crossers who evaded apprehension.

Strange that this receives very little attention in the media

“Strange that this receives very little attention in the media,” Musk wrote in response to Melugin on Aug. 14.

Musk, a self-portrayed political moderate and a design engineer by trade, has shared his perspective with his 100 million-plus followers on a wide range of issues beyond cars and rockets.

The billionaire’s comments on the border crisis, for example, were the latest in his series of criticism of the current administration and the Democratic Party in general; others include his comments on the influence of labor unions on the Democratic party, the Spygate collusion scandal involving Clinton-affiliated Democrats, and the Biden White House’s alleged sidelining of Tesla’s role in the electric vehicle market.

The backstory to the exchange between Musk and Melugin features an ever-increasing surge in illegal immigration, overextended Immigration and Customs Enforcement (ICE) resources, and an administration that actively strives to undo Trump-era “America First” immigration policies.

Eagle Pass is only one of the regions along the southwest border where hundreds of illegal immigrants pour into the United States. From the beginning of fiscal year 2022 on Oct. 1, 2021, to early August this year, border patrol agents apprehended 1.8 million illegal crossers. That’s more than the population of Phoenix, Arizona, the fifth-most populous city in the country, and about 40 percent higher than the total number of apprehensions in the previous fiscal year.

BORDER: Border Patrol agents organize hundreds of illegal immigrants who have streamed across the border from Mexico near Eagle Pass, Texas, on May 20. pic.twitter.com/ftZyyhfTc0

The head of the Department of Homeland Security (DHS), meanwhile, insists that the border is secure, while the Biden administration is kept busy by legal disputes with border states about key Trump migration policies.

One of the policies that the Biden administration began pulling back—following a Supreme Court decision that ruled in its favor—was the “Remain in Mexico” policy, which required non-Mexican migrants seeking asylum in the United States to wait in Mexico for processing.

Meanwhile, the Biden administration will continue to enforce the Trump-era immigration and public health policy known as Title 42, a policy instated as a COVID-19 countermeasure that allowed the United States to quickly expel migrants who unlawfully entered the United States and bypassed health screening in the process. A judge blocked the Biden administration’s attempt to lift Title 42 in May.

Another legal battle that will be consequential to border security will play out in the Supreme Court in the fourth quarter of this year, when the highest court will hear a case on whether Biden’s immigration enforcement guidelines constitute executive agency overreach. In July, the Supreme Court allowed a federal judge in Texas to block the Biden administration’s immigration guidelines that, according to the border states’ prosecutors, limit the ability of border agents to detain and deport illegal aliens.

“The Biden Admin’s border record is an absolute failure,” Chad Wolf, former acting DHS secretary in the Trump administration, wrote on Twitter on Aug. 17, following reports of anonymous CBP sources saying that a record-setting 2 million illegal crossers were apprehended since the beginning of fiscal year 2022.

“I encourage Republicans next year to enact strong oversight in this area – specifically how DHS leadership executed an intentional plan to endanger migrants and American communities by refusing to enforce the law,” Wolf wrote.