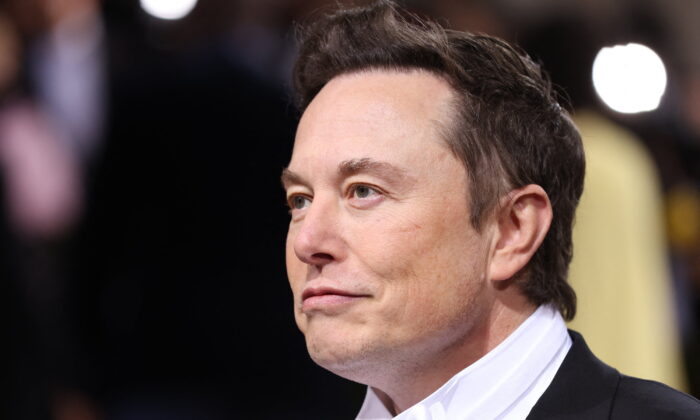 Elon Musk arrives at the In America: An Anthology of Fashion themed Met Gala at the Metropolitan Museum of Art in New York City, New York, on May 2, 2022. (Andrew Kelly/Reuters)
By Jack Phillips

More than a week after it was announced Elon Musk would purchase Twitter, the world’s richest person issued a notice to Twitter employees about what they can expect.

Among several other expectations, Musk said that he values a positive work ethic. He was responding to his previous Twitter post about the direction he wants to see Twitter take after he assumes ownership of it.

“Work ethic expectations would be extreme, but much less than I demand of myself,” Musk said on Twitter over the weekend.

On April 25, the Tesla CEO and Twitter announced that the firm accepted Musk’s $44 billion offer. Meanwhile, it was reported that Musk would serve as the firm’s temporary CEO once the deal is completed, although Musk hasn’t issued a public comment on that claim.

A filing with the Securities and Exchange Commission (SEC) on May 5 signaled Musk raised $7.14 billion toward funding the purchase of Twitter.

In his previous post, the multi-billionaire touted Twitter under his leadership would be “super focused on hardcore software engineering, design, infosec [and] server hardware.”

“I strongly believe that all managers in a technical area must be technically excellent,” Musk also wrote. “Managers in software must write great software or it’s like being a cavalry captain who can’t ride a horse!”

When the deal was announced, Musk suggested that he would place an emphasis on free speech after the takeover, which could take weeks or months to complete. Previously, Musk has criticized Twitter’s content moderation policies.

“Free speech is the bedrock of a functioning democracy, and Twitter is the digital town square where matters vital to the future of humanity are debated,” Musk said in a statement. “I also want to make Twitter better than ever by enhancing the product with new features, making the algorithms open source to increase trust, defeating the spam bots, and authenticating all humans. Twitter has tremendous potential—I look forward to working with the company and the community of users to unlock it.”

On May 6, Twitter and Musk were sued by a Florida pension fund seeking to prevent Musk from quickly carrying out the takeover of the company. In a complaint filed in Delaware, the Orlando Police Pension Fund wrote that Musk can’t complete the takeover until at least 2025 unless two-thirds of shares that are not owned by him are approved.

The lawsuit said Musk became an “interested stockholder” after taking a more than 9 percent Twitter stake, requiring the delay. Twitter and its board, including Chief Executive Parag Agrawal, are also defendants.