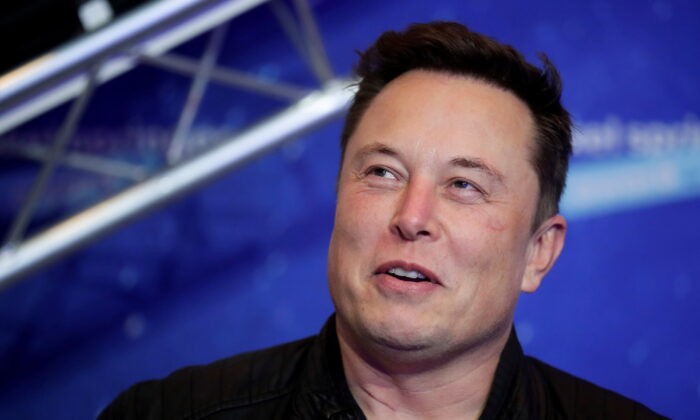 SpaceX owner and Tesla CEO Elon Musk looks on after arriving on the red carpet for the Axel Springer award, in Berlin, Germany, on Dec. 1, 2020. (Hannibal Hanschke/File Photo)
By Katabella Roberts

Gates, on his Twitter account, had earlier posted a link to a blog entry titled “To cut emissions, use this Swiss Army Knife”; a screenshot of which was captured and shared by The Whole Mars Catalog on Twitter.

“Cheap clean hydrogen would be a great breakthrough we have many uses for it. Also if we could bottle the tooth fairy and clone Santa Claus, and replace public transport with unicorns we’d be all good,” one Twitter user commented in response to the blog post, to which Musk replied with a laughing face emoji.

Hydrogen is an energy carrier, not an energy source, and can be used in fuel cells to generate electricity, or power and heat. In the United States, it is predominantly used to refine petroleum, treat metals, produce fertilizer, and process foods.

Because its conversion into electricity does not emit greenhouse gases, Hydrogen could potentially serve to meet climate change coals set out by President Joe Biden as well as other world leaders.

However, critics note that while it is a renewable source and has only minimal impact on the environment, it doesn’t come without its risks: it is more flammable than natural gas and its flame is nearly invisible.

Scientists have also warned that hydrogen leaked into the atmosphere can contribute to climate change by increasing the amounts of other greenhouse gases, thus indirectly resulting in global warming.

‘Cheap, Green Hydrogen Would Be a Massive Breakthrough in Clean Energy’

Hydrogen is also difficult to store, given its low volumetric energy density, and must be compressed into gas or liquid at extremely low temperatures.

Gates’ blog post notes that “cheap, green hydrogen would be a massive breakthrough in clean energy” and that “the world already uses 70 million tons of hydrogen each year as a chemical in some manufacturing processes like making fertilizer” of which nearly all is produced from fossil fuels.

“If we make that hydrogen clean, we eliminate the 1.6 percent of global emissions that it is responsible for now,” the billionaire wrote.

Electrolysis is the process of splitting water into hydrogen and oxygen, which takes place in an electrolyzer, according to the Office of Energy Efficiency and Renewable Energy.

However, the process can be expensive and energy-intensive.

“There are four different electrolyzer technologies being developed, and the price of each one needs to go down to make electrolyzed hydrogen cost-competitive,” Gates wrote on his blog.

“Finally, there are reserves of hydrogen in geologic formations around the world, and in theory, geologic hydrogen has the potential to provide a vast supply of affordable, zero-emissions hydrogen,” Gates continued. “Scientists are still in the early stages of researching ways to find and extract geologic hydrogen from natural reserves.”

Pointing to Russia’s war in Ukraine and the West’s aim to reduce dependence on Russian natural gas imports, Gates noted that the European Union has already announced plans to produce and import 20 million tons of green hydrogen by 2030.

This is not the first time that Musk and Gates have appeared to butt heads.

Speaking to the Wall Street Journal, in May Gates claimed that Musk could “actually could make it worse,” while referring to misinformation and his planned takeover of the social media platform, Twitter.

However, the tech billionaire noted: “That’s not his track record.”

In April, the businessman became embroiled in a public spat when Musk said he confronted Gates over his short-selling of shares of Tesla, despite vowing to combat climate change.