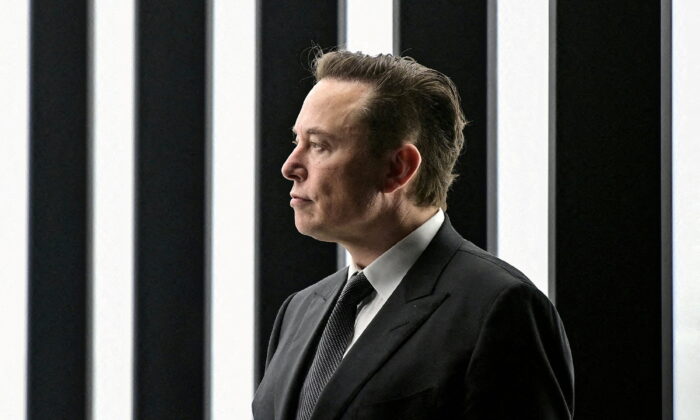 Elon Musk attends the opening ceremony of the new Tesla Gigafactory for electric cars in Gruenheide, Germany, on March 22, 2022. (Patrick Pleul/Pool via Reuters)
By Reuters

SAN FRANCISCO—Elon Musk testified on Monday that he was sure he had backing from Saudi financiers in 2018 to take Tesla Inc private, but said the fund later backpedaled on its commitment.

Musk acknowledged he did not discuss a takeover price with representatives of the Saudi fund, but said they made clear they would do what it took to make a buyout happen.

Musk subsequently said that Yasir Al-Rumayyan, governor of the fund, later backpedaled on the commitment to take Tesla private.

“I was very upset because he had been unequivocal in his support for taking Tesla private when we met and now he appeared to be backpedaling,” Musk testified.

Attorneys for Al-Rumayyan did not immediately return a request for comment.

The lawyer for the investors told the court that written evidence does not support Musk’s claim that the Saudi fund made a commitment to him, adding that minutes of a meeting between Musk and the Saudis showed the Saudis wanted to learn more about Musk’s plan.

Musk is defending against claims that he defrauded investors when the billionaire posted on Twitter on Aug. 7, 2018, that he had “funding secured” to take Tesla private at $420 per share, and that “investor support is confirmed.”

Investors say they lost millions as a result of Musk’s tweets.

The trial tests Musk’s penchant for taking to Twitter to air his sometimes irreverent views, and when the world’s second-richest person can be held liable for crossing a line.

Tesla’s stock price surged after Musk’s tweets, and later fell as it became clear the buyout would not materialize.

A jury of nine will decide whether the Tesla CEO artificially inflated the company’s share price by touting the buyout’s prospects, and if so by how much.

But in Monday’s testimony, Musk said he believed he could have sold enough shares of his rocket company SpaceX to fund a buyout, and “felt funding was secured” with SpaceX stock alone.

Musk testified that when he sent the tweet announcing the deal, he was saying “not that it will happen, but that I am thinking about it” and that funding was secured, in his “opinion.”

Musk was also sued by the U.S. Securities and Exchange Commission over the tweets, leading to a combined $40 million in settlements for him and Tesla and a requirement that a Tesla lawyer screen some of his tweets in advance.

The SEC had alleged that Musk rounded the alleged buyout offer to $420 per share from $419 because he had recently learned about the higher amount’s “significance in marijuana culture” and thought his girlfriend would find it funny.

Musk denied having thought that.

“It was chosen because it was a 20 perceent premium over the stock price,” he testified. “The $420 price was not a joke.”

He began testifying on Friday, telling jurors that while Twitter, which he bought in October, was the most democratic way to communicate, his tweets did not always affect Tesla stock the way he expects.

“Just because I tweet something does not mean people believe it or will act accordingly,” Musk said.

The defendants also include current and former Tesla directors, whom Spiro said had “pure” motives in their response to Musk’s plan.