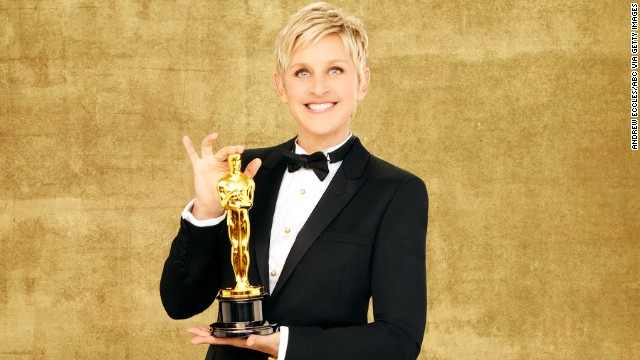 Ellen DeGeneres: The 2014 Oscar Hostess We Want Back! (Nothing Personal Neil)

SHE NAILED IT.  This was all I could think of at the end of the night on Sunday, March 2, 2014. It was the first time ever that I had stayed up to watch the entire Academy Award ceremony sans being bored out of my mind.  This was courtesy of famed comedienne and talk show host Ellen DeGeneres.  Who knew?  Well… really… I sort of guessed it.  But it was rendered all the more satisfying to discover that I had guessed it right.

Ironically (according to Variety), Ms. DeGeneres was not even up for hosting the 2014 awards show.  She had done so in 2007, and I admittedly don’t even recall that particular ceremony one way or the other.  In any event she was barely up for it in 2014 and for whatever reason, after last year’s phenomenal success she did not wish to return for this years 2015 ceremonies.  I do bemoan and declare… an absolute loss for viewers, attendee’s and nominee’s alike!

Moreover, I do insist that while this years scheduled host, Mr. Neil Patrick Harris (Doogie Howser, M.D., How I Met Your Mother, Hedwig and The Angry Itch) has successfully helmed both the Tony’s and the Emmy’s, he’ll have his work cut out for him if he wishes to follow in the footsteps of Ellen DeGeneres’ Pizza and Selfie fest of 2014.

Year after year television cameras pan on into the faces of the guests and nominees, and the ceremony flows on uneventfully throughout the evening.  Yes, they smile.  Certainly it’s the thing to do.  But let’s keep it real for a second.  A great many of these Actors, Actresses, Producers, Writers, Directors, Musicians and behind the scenes people are nervous and a little weary.

This day, and this coveted honor has been rearing-up for weeks.  They’ve been on the red carpet and haven’t eaten for literally hours before the actually ceremony begins. Not only are they likely to be a tad antsy even before they step foot on the red carpet, it’s probably compounded by the three hours of sheer boredom they have to endure before and even after their category is done and over with.  It was high time one of their peers recognized this and took measures to ensure that they’d enjoy aspects of this night beyond the coveted gold statuette.

Yes, every year some comic gets on stage and takes one-liner potshots at the celebs, designed to entertain the television viewer at home and not the nominees.  These one-liners are almost never recalled after that night and it usually fails to quell the tension-filled auditorium.

I’ve been watching these ceremonies all of my life, and from one year to the next, with the exception of candid moments the likes of Jennifer Lawrence’s most eloquent “trip” to accept her honors –  I can never recall any of those ceremonies outside of a mere moment or two in time. But with Ellen DeGeneres as host – the ceremony was jovial and alive.  Ellen charmed her audience, and even “played” to the audience in front of her as opposed to the television cameras. In the process she gained the favor of those at home without even trying.

It was evident that if any of these industry professionals were anxiety ridden at all (and yes, they are human beings – so anxiety would certainly be in order), that for at least a few moments Ellen DeGeneres cleared their psyche’s from the bourgeois formalities of the night and enchanted them into letting their hair down for a few.

I mean who can forget the record-breaking Selfie Tweet that Ellen persuaded Bradley Cooper into taking with her, Jennifer Lawrence, that brother-guy of Lupita Nyong’o, Meryl Streep (MERYL STREEP!!! – HELLO!), Julia Roberts (JULIA ROBERTS!!  HELLO!!!), Jared Leto, Lupita Nyong’o, Brad Pitt, Angelina Jolie, and Channing Tatum.  Ellen didn’t force these celebs to come join in on the selfie, nor were they fueled by their egos.  The previously cloaked youngster within each of every one of those celebs just wanted to join in for the fun of it, and at that very moment it’s highly doubtful that any of these people are thinking about whether or not they have won or are going to win an Academy Award.  They are in the moment and this happens all to infrequently at these stuffy awards ceremonies.  Yes, the glory was Ellen’s and she should be proud to own it.

Do these people look bored to you? The Oscar Nominees and invitees actually ENJOYING themselves.  Courtesy of crazy Ellen D.  Every smile is genuine. Ellen humanized our cinema idols.

And who could ever forget the great  Academy Award Pizza Fest Bluff-turned-real?  I won’t forget it. Ellen at first appears to bluff at ordering pizza for the celebs.  But unlike the average host, Ellen shocked the auditorium and the television viewers by actually having the pizza delivered to our Oscar nominated celebs, at an event notorious for having a no-food policy.

Which celebs actually risked tomato sauce on their formal wear?  Some did and some didn’t: Jared Leto took a slice for his mom, Meryl Streep took two slices for herself and hubby, the lovely and charming Brad Pitt pitched in to hand out plates and took a slice for himself, Kevin Spacey handed out plates, Dax Shepard enjoyed a slice, Harrison Ford enjoyed a slice, Leonardo DiCaprio did not have a slice. Corinne Fox, Channing Tatum, and Jenna Dewan Tatum all took a slice, and  Kerry Washington got a slice backstage.

Who can then forget Ellen combing through the audience of celebs (and honing in on the ridiculously wealthy industry mogul Harvey Weinstein, as well as Marty Scorsese)  to take up a tip collection for the pizza delivery guy who ended up garnering his own 15 minutes of illustrious fame, via the comedic frequency of Ellen D.  He ended up opening his own restaurant.   Way to go Ellen.

ARE YOU HUNGRY? – WHAT THE HECK – SCREW THE ACADEMY – LET’S ORDER SOME PIZZA!  Below Ellen passes out slices of pizza to the nominee’s and invitees.  Jared Leto wants some – and look at his face – he’s enjoying himself!  I mean WHO DOES THIS at the Oscars??? Ellen DeGeneres does!

A pregnant Kerry Washington enjoys her slice back stage.

ELLEN DEGENERES did more than entertain the television audience, she entertained the celebrities, and over the years I have indeed gotten the feeling that the celebs are left feeling as if they cannot escape their showcase, red-carpet mode of existence.  Ellen coaxed them out of that mode and humanized them all in the process.

The 2014 Academy Awards were simply a pleasure to watch from beginning to end and I do indeed bemoan that Ellen has opted not to return.  It’s my hope that she’ll rethink it – perhaps for next year.  I’d love to know the reason for her disinterest but at this point it doesn’t matter.  She won’t be back and that’s all that matters for now.  I wish Neil Patrick Harris all the best.  But I’m sticking to my story that I’d much rather see Ellen DeGeneres evoke her magic yet again come Oscar Sunday 2015.  We want you back Ellen!