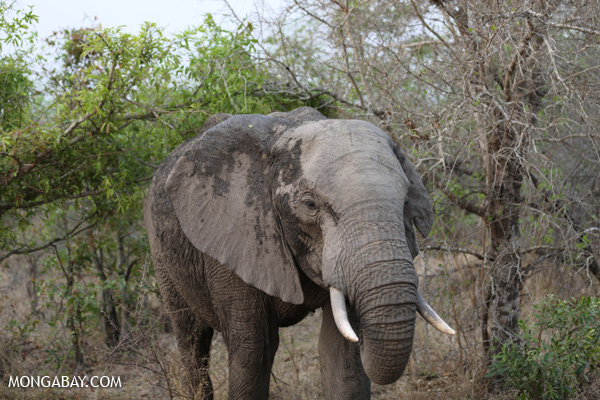 New figures show essentially no change in the number of elephants killed in Africa by poachers last year, despite a high-profile meeting on the crisis which was attended by 46 countries and a number of commitments. Data from CITES’ Monitoring the Illegal Killing of Elephants (MIKE) estimated that around 20,000 elephants were killed in 2014, the same as in 2013. The means poaching still outstrips natural birth rates and the continent’s overall population remains in decline.

“This species could be extinct in our lifetime, within one or two decades, if the current trend continues,” Dune Ives, a senior researcher at Vulcan, said at an elephant conference in Botswana yesterday. “In five years we may have lost the opportunity to save this magnificent and iconic animal.”

Vulcan is funding a Great Elephant Census to get a more accurate sense of elephant populations across Africa.

MIKE’s data shows that poaching actually rose slightly last year in southern and Central Africa, but fell to its lowest rate since 2011 in Eastern Africa. Most worrisome, however, poaching hit a new record in West Africa.

“African elephant populations continue to face an immediate threat to their survival from high-levels of poaching for their ivory, especially in Central and West Africa where the situation appears to have deteriorated,” said John Scanlon, the Secretary-General of CITES “We are however also seeing some encouraging signals in parts of East Africa where the overall poaching trends have declined, which shows us all what is possible through a sustained and collective effort.”

CITES furthermore pointed to poaching hotspots like Bangassou in the Central African Republic, Garamba in the Democratic Republic of the Congo, Niassa in Mozambique, Pendjari in Benin, and Selous-Mikumi in Tanzania.

According to the IUCN, elephant populations across the continent have fallen by 80,000 animals in seven years, from 550,000 in 2006 to 470,000 in 2013. During that time, East Africa lost a third of its elephants. But, less than a hundred years ago, experts believe between three and five million elephants roamed Africa.

Despite such losses, not everyone believes that Africa’s elephants are on the precipice of extinction.

“In huge parts of southern Africa, elephant populations are very healthy,” Mike Pflanz a journalist with the Telegraph said. “The same goes with the rangelands in Kenya, and parts of Tanzania…most people here believe the worst case scenario would still see half the elephants remaining—not that they’ll disappear.”

Elephants across Africa are slaughtered by poachers for their ivory, which is then smuggled abroad, usually to East Asia. China remains the largest market for ivory with the U.S. second.

Last year, the Obama Administration announced stronger laws against the ivory trade and closed a variety of loopholes. And this February, China announced a year long ban on importing carved ivory. Conservationists greeted China’s announcement as an important symbol and a move forward, but said that the country need to do more to show it was committed.

For its part, CITES has tasked 19 countries connected to the trade—either as poaching hotspots or ivory importers—to develop and implement National Ivory Action Plans. Three of the countries—the Democratic Republic of Congo, Laos, and Nigeria—have failed to submit a plan leading to the CITES Standing Committee to request that commercial trade be suspended with these countries for all CITES-listed species, a common penalty under CITES for countries that fail to take conservation action.

The plight of elephants is actually indicative of status of Africa’s great mammals. Rhinos are being wiped out for their horns. Lion populations have plunged precipitously due to habitat loss, poaching, human-wildlife conflict, and prey decline. Even giraffe and hippo populations are believed to be falling. Indeed a shocking study in 2011, estimated that Africa’s big animal populations in protected areas had fallen by 59 percent in 40 years.