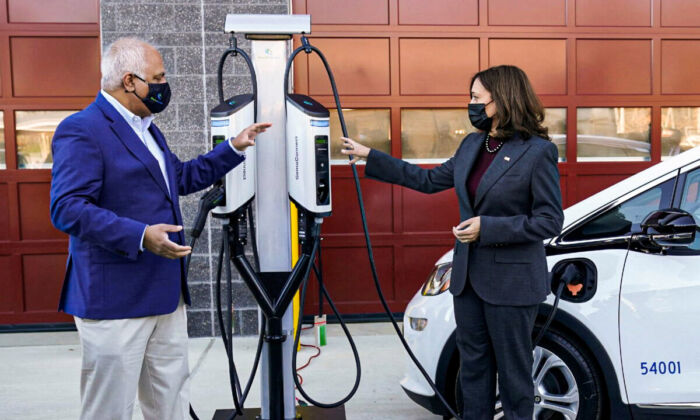 The push to transition the national road fleet to electric vehicles (EVs) is on and while increasingly popular with buyers, experts in the transportation space are examining potential problems with mass EV adoption.

One such issue involves EVs and evacuations during natural disasters.

A report from Transportation Research published in ScienceDirect headlined “Can we evacuate from hurricanes with electric vehicles?” found that Florida—which often bears the force of hurricanes—may not have enough power to cope during an evacuation.

“If the majority of the evacuating vehicles were EVs, Florida would face a serious challenge in power supply,” the report said.

It added that could affect six out of the nine main power authorities, especially those in mid-Florida, and “could induce cascading failure of the entire power network” throughout the state.

In California, the two main natural disasters are earthquakes and wildfires.

Both are short-notice events that have the potential to knock out the power grid with no warning, making it especially difficult, if not impossible, to charge a Battery Electric Vehicle (BEV),” a case study from California Polytechnic State University found.

In 2020, sales of electric vehicles (EVs) reached a record 3 million, according to the International Energy Agency (IEA). And, EV sales could increase to 23 million by 2030, thanks partly to the Biden administration’s stated goal of half of all new vehicles sold in 2030 being zero-emissions vehicles.

However, according to a panel of experts at the 2022 National Conference of State Legislatures (NCSL), the problem has yet to be solved.

“What happens when people … run out of battery on the side of the road [during an emergency evacuation]?” an NCSL conference attendee asked.

“What’s your vehicle evacuation plan at that point?”

State Sen. Jeff Brandes (R-Fla.), one of the panelists for “The Promise and Challenges of Electric Vehicles” at NCSL, acknowledged the problem and said Florida was examining the issue. It did not yet have a solution.

State Sen. Faith Winter (D-Colo.) said a “really creative company” in Colorado was examining the feasibility of putting chargers in crates and deploying them “like we deploy water, like we deploy firefighters.” Winter said Colorado is aware of this issue and is looking for a solution.

Alex Schroeder, interim executive lead for the Joint Office of Energy and Transportation, didn’t attempt to answer the question.

In 2020, Dr Kairui Feng, a researcher at the Department of Civil and Environmental Engineering at Princeton University, along with her colleagues Dr Ning Lin and Dr Siyuan Xian, released a report with Dr Mikhail Chester, the director of the Metis Center for Infrastructure and Sustainable Engineering at Arizona State University, on the problem of evacuating from hurricanes with EVs.

The team used Hurricane Irma (2017) for its evacuation model,

“Severe travel delays happened throughout the state due to traffic jams; some highways [with a 75 mph speed limit] were experiencing a 15 mph peak traffic speed under a tripled traffic volume, compared to the usual conditions.”

Assuming the movement of the cars would be the same, researchers examined the electricity demands if the evacuating vehicles were EVs and compared that to the power providers in Florida.

The simulation result found that in some areas “the power demand would significantly exceed the capacity,” but others areas would hold up better in the short-term due to drivers charging at home.

As batteries drained and needed to recharge, however, the simulation showed concerning results.

“When the exodus reached inland Florida and batteries are depleted, the power service companies there would face enormous electricity pressure, and the EV power demand would rapidly exceed their safety margins.”

Indeed, the report found that some power companies would experience a power shortage of 400 megawatts to 1000MW, meaning between 35 to 45 percent of vehicles would receive power, and 55 to 65 percent wouldn’t.

Further, while power companies in cities such as Tallahassee and Gainesville would initially be capable of supplying power, once demand on other grids surpassed supply, there would be a “larger-scale cascading failure in the power network” lasting up to three days.

The report’s abstract states, “The increasing usage of electrical vehicles might not meet the safety requirement of massive hurricane evacuations, which may happen more frequently in the future climate.

In response to the critique of EVs not being suitable for evacuations during hurricanes, the EV advocacy site EV Resource wrote, “While power outages are a problem during and after hurricanes, there aren’t electricity shortages before the storm.”

In EV Resource’s opinion, people can charge before a storm, and that charge should be sufficient to reach safety.

“EVs don’t sit and burn fuel. The horror stories of people being stuck in traffic for 12 hours and running out of gas simply aren’t a problem for EVs and hybrids. Even for long stays in traffic, EVs can run for a long time by shutting off non-essentials like air conditioning.”

Neither the Electrification Coalition nor the Eclectic Vehicle Association returned The Epoch Times’ request for comment on evacuation solutions.

EV Resource didn’t provide data to back up the above assertions on their site. Moreover, while hurricanes usually have advanced warnings, fires and earthquakes often don’t, as pointed out in “The Use of Electric Cars in Short-Notice Evacuations: A Case Study of California’s Natural Disasters.”

Further, the case studies’ authors—Roxanne Peterson and Mohamed Awwad of the Industrial and Manufacturing Engineering Department at California Polytechnic State University—point out, “Short-notice evacuations, such as those caused by wildfires and earthquakes, may lead to stall-outs, resulting in increased traffic and accidents.”

According to the case study, EVs have a range of 100 to 200 miles, and full recharging can take anywhere from three to 12 hours. Fast charging is quicker, but still takes up to 30 minutes.

In the case of an emergency evacuation charging delays “can create serious problems in evacuations” leading to increased traffic and traveling delays as EVs potentially block lanes.

“Both are short-notice events that have the potential to knock out the power grid with no warning, making it especially difficult, if not impossible, to charge a Battery Electric Vehicle (BEV).